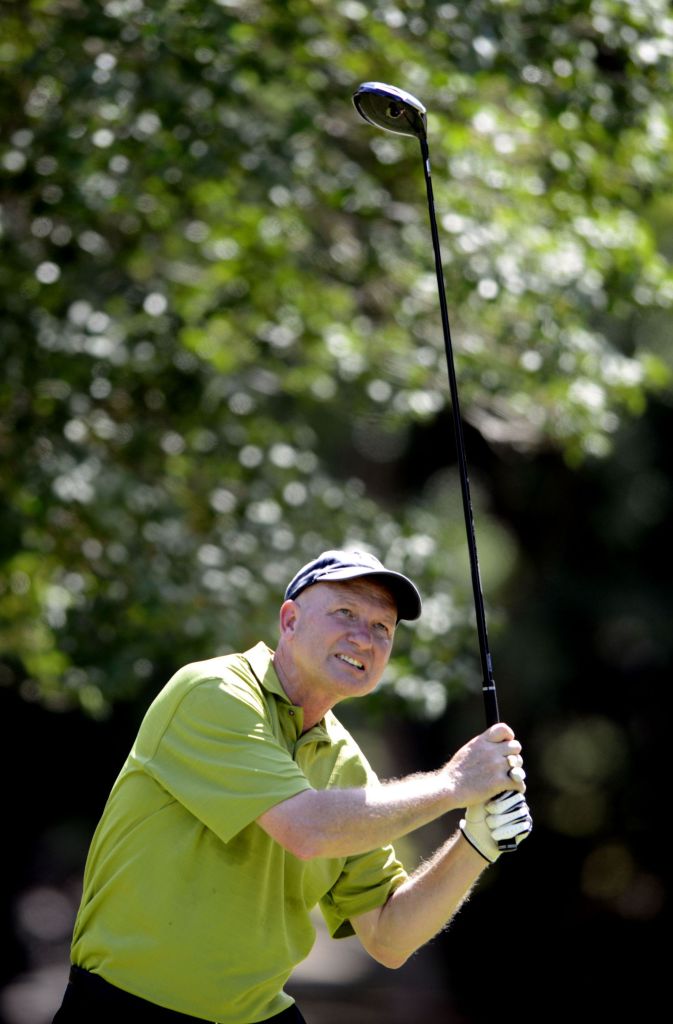 The final four in the event is now set for this morning at the Country Club of Salisbury’s par 71 course. The two winning teams from this morning’s match play rounds will square off at about 1:30 p.m. for the championship.

In Sunday’s quarterfinals, two of the matches were decided by birdies on the final hole while another turned on a clutch 55-yard eagle shot.

The team of Eric Mulkey and Josh Brincefield advanced with a 3 and 2 win over Jim Christy and Jimmy Hubbard. They will face Lee Frick and Blake Wray at 9 a.m. in one semifinal after their 1-up win over Steve Gegorek and Nick Lyerly. The other semi-final matches Charlie Graeber and Michael Childress against the father-son duo of Glenn and Roy Dixon.

The Dixons edged the team of David Miller and Jon Dyer 1-up on Roy’s 8-foot birdie putt on the final hole. Graeber and Childress put together an impressive 6-under round and defeated the 2012 championship team of Ken Clarke and Chris Owen.

The most dramatic finishing shot of the day came from Lee Frick on his team’s final hole, the par 3 ninth. He drained a 35-footer from 8 feet off the green for a birdie that won the hole and the match.

“My partner keeps me in there long enough for me to do something crazy, “ Frick said. “I just had a feeling about it, but I really expected Nick (Lyerly) to hit his birdie putt too.”

Lyerly, an East Rowan junior golf star, had a 20-foot birdie attempt to halve the hole, but it was just wide right.

Frick had hit a strong drive on the hole that sailed over the green and landed in a sprinkler head depression. After taking a relief drop, he got the green light to go for the birdie after Wray stuck a sand shot within 2 feet of the hole to assure the team at least a par.

“That was a little lucky there,” Wray said. “We didn’t catch many breaks today, but we caught one there. Now we’re going to go out Monday and have some fun and do our best. That’s all we can do.”

They will next face the confident team of Mulkey and Brincefield, who took control on their 10th hole Sunday enroute to their 3 and 2 win over Christy and Hubbard.

Playing the par 4 first hole, Mulkey put his drive down the left side about 55 yards from the green. His second shot hit 5 feet in front of the hole and rolled in for the eagle.

“I just wanted to try and get it close because Christy had already hit his shot within about 6 feet,” said Mulkey, who has already won the Horace Billings Rowan Amateur tourney this summer. “It’s all luck. I was just trying to get it in a 3-foot circle and it went in.”

Christy and Hubbard, who knocked off defending champs Davis Richards and Jake Kennedy in Saturday’s opening round, had just won two holes in a row to tie the match before Mulkey’s eagle turned the tide for good.

The other clutch shot of the day came from the Dixons as they withstood a furious rally down the stretch from Dyer and Miller. At the turn, the Dixons went 4-up as Glenn drained a clutch 30-foot birdie putt on the ninth. But Dyer and Miller rallied back with an eagle on 15 and a birdie on 17 to even the match with one hole left.

Roy Dixon, a top golfer at UNC Greensboro, nailed the 8-footer for birdie and the win on the final hole.

The last semifinal spot went to the coach-and-pupil team of Graeber and Childress. They shot 6-under as a team. Childress, a 15-year-old freshman at Cannon School, contributed six birdies and shot 68.

“Michael played phenomenal,” Graeber said of the young golfer he coached for three years at Sacred Heart. “My coaching really paid off.”

Graeber won the Labor Day title back in 1995 with Joey Rusher while Childress is making his first serious run in the event. He is the youngest in the championship field, but he already appreciates the storied history of the event.

“I have gotten to the age now where I realize what a great history this tournament has,” Childress said. “The closer we get to the finals, the more I want it.”

A total of 120 teams made up this year’s tournament including the championship flight, 10 regular men’s flights, a senior flight, a super senior flight and the women’s flight. Winners in all flights will be determined today.

In the women’s flight, the dominant team of Allison Adams and Grace Yatawara seem poised to claim their fourth straight championship on Monday. They reached the finals with an impressive 8 and 7 win over the team of Kathy Carlton and Cindy Carmazzi.

See today’s scoreboard section for a listing of Sunday’s winners and the pairing for today’s matches.