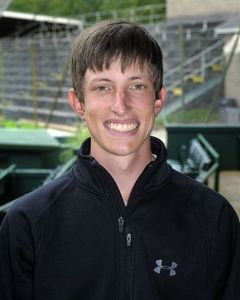 KANNAPOLIS — Alex Austin may be exhausted physically and mentally right now, but he feels like the mayor of Golfsville.
Austin shot 80 and failed to make the cut in a tournament he played in Wednesday at The Club at Irish Creek, his unofficial home course, but it wasn’t possible to wipe the smile off his face.
There’s a national-championship cap in his wardrobe now and a national-championship ring on the way, and those are things no one can ever take away from the 2013 Salisbury High graduate.
Austin was part of the five-man Sandhills Community College golf team that won the Division III Junior College Championships last Friday in upstate New York.
You can say it was only junior college if you want, but let’s face it, national championship are national championships, no matter the level.
“Just getting to play for a national championship, that’s an amazing, incredible feeling,” Austin said. “To win it — that’s even more incredible.”
The reason you haven’t heard a lot about Austin is that Salisbury High has been one of the dominant programs in 2A. During Austin’s freshman year, the Hornets were state runner-up. His sophomore and junior seasons, the Hornets won state championships. And even though Austin would’ve been the best golfer at a lot of schools, he couldn’t crack Salisbury’s top four. He was part of those Dale Snyder-coached state-title teams, and he enjoyed playing with a series of talented golfers, but winning as a supporter wasn’t nearly as fulfilling as winning on the course.
Austin stepped forward as a key player for Snyder as a senior. He helped the Hornets place fourth in the 2A state championships and got college offers.
He felt his best opportunity was at Sandhills Community College, coached by well-regarded Gus Ulrich in the golf hotbed of Pinehurst. It was a chance to improve his grades and improve his skills for two years with Ulrich, with the idea of moving on from Sandhills to a strong four-year program.
But Austin found out immediately that Sandhills was almost too good. Working into the Sandhills lineup was as challenging as it had been at Salisbury.
“They had an All-American (Nick Thompson) and another good player back and had added two guys that were really good,” Austin said. “Coach told us we had a chance to be a national-championship team, and that’s what we worked for. There were nine on the team, so I knew I had my work cut out to be one of the top five that would go to nationals.”
Austin didn’t secure a top-five spot until he shot 75-79 — 154 in the regional tournament at Emerald Golf Club in New Bern in April. He helped his team win that tournament, and the Sandhills Flyers qualified for a return trip to the nationals where they had finished second in 2013.
The nationals are played at historic Chautauqua Golf Club in upstate New York, 75 miles south of Buffalo and right off the shores of Lake Erie. It’s not a place you would want to be in March, but this was June, and Austin was very happy to be there.
Chautauqua will celebrate its 100th birthday next month. It’s a course where Ben Hogan and San Snead played, and a course where Bill Clinton reportedly visited the rough frequently.
“We flew up there and we had a chance to play a practice round,” Austin said. “It’s a tough, old Donald Ross-designed course. The fairways are tight. The greens are small. The rough is very deep. Hit in the rough there, and you’ve got no chance.”
Austin admits he didn’t play his best, but he had three teammates who played lights out. Thompson shot 3-under and won the individual title. Cody Roberts and Ediz Kemaglou earned All-America status. All three shot 70s on the fourth and final day as Sandhills, which entered the final 18 down by four strokes, won going away by 15.
Austin shot 81-82-84-84 in New York. The top four individual scores each round made up the team score, and Austin’s scores in the first and third rounds were the fourth-best for the Flyers. Teammate Caleb Chavis had the scores that counted on the second and fourth days.
“I don’t feel like I played that well,” Austin said. “I had a triple bogey in the third round and I knew my score was going to count, so that was tough. But it was a fantastic experience to help out some amazing teammates and help win a national championship.”
The temperature was a coolish 60 degrees last Friday after they won the title, but that didn’t stop the Flyers from taking a celebratory dive in the waters of Lake Chautauqua. You don’t win a national championship every day.
The team flew back to Raleigh and Austin slept a night in Pinehurst before coming home to play in the Toshiba Open at Irish Creek. He played a practice round Monday and turned in a solid 73 on Tuesday, but fatigue caught up with him a bit during Wednesday’s 80.
“I’ll take 153 for two rounds, but I’ve been up and down and I wish I was more consistent,” Austin said. “I think I was just mentally exhausted from nine rounds in two weeks. That was a long, long two weeks.”
With the U.S. Open cranking up, Austin knows it’ll be crazy in Pinehurst for the next few weeks.
The success of Sandhills CC, a program that is embraced by the Pinehurst community, caused at least a fraction of that excitement.
As far as the future, Austin is already talking about back-to-back national titles.
“We lose great players, but as a team we can do it,” he said. “As far as individually, I’ll just have to see where grades and golf can take me.”
Golf already has made him a national champion.