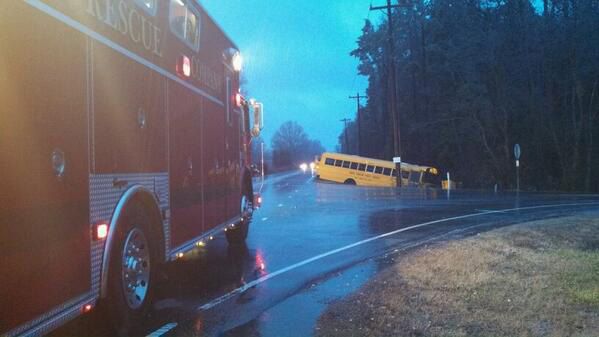 UPDATE:
Officials say they will open an emergency shelter at the Hurley Family YMCA, 828 W. Jake Alexander Blvd., Salisbury, beginning today at 5 p.m. to provide shelter for those residents without power or who may need shelter.
The winter weather advisory has expired, as scheduled, at noon. A new advisory calls for freezing rain until 2 p.m. Temperatures should begin to rise after that period.
The icy weather caused a school bus to slide down an embankment at Majolica and Sherrills Ford roads earlier and hit a natural gas main. Three students and the driver were on the bus and not injured. The leak was contained. They were on their way to West Rowan High School. Salisbury Post reporter Shavonne Potts says emergency officials told her there were icy patches on the road and the bus driver lost traction. Crews were able to remove the bus from the embankment.
Rowan-Salisbury Schools were on a regular schedule this morning. Superintendent Dr. Lynn Moody called it “a worst case scenario.”
Trees continue to fall all over the county. Accident reports have slowed but Woodleaf and Patterson roads, and U.S. 52 and Stokes Ferry Road were particularly treacherous. A tree fell across Statesville Boulevard, taking power lines down and blocking the road. Traffic lights are out at Ashbrook and Enon Church roads, Stateville Boulevard and Ashbrook and Statesville and Hurley School Road and at various points along Jake Alexander Boulevard, including at the Faith Road intersection.
Two trees came down on a house on Dappler Lane, causing significant damage. Another tree came down behind Noah’s Play Loft and the day care was sending children home and closing because they were without power. All of the parents had arrived to pick up their children and teachers were gone by 11:30 a.m. Some trees caught fire as they hit power lines.
The A tower at Novant Health Rowan Medical Center lost power for about three hours this morning due to a weather-related outage, hospital President Dari Caldwell said.
The hospital switched to emergency generators seamlessly, Caldwell said. “We didn’t miss a beat,” she said.
The power at the hospital came back on about 11:30 a.m.
Multiple vehicles have slid off the road, including one on Jake Alexander Boulevard near Sacred Heart Catholic Church. The car ended up upside down in a creek, but the driver was able to get out.
Various schools have partial or complete power outages. West Middle School reports all power is out. A caller to the Post said Knollwood Elementary School was without power and she did not take her child to school. The school remains dark.
Callers to the Post are upset that schools are open and children were on buses in the weather. Comments on the Salisbury Post’s Facebook page include this one — Cleila Sizemore Spratt: “Parents have the final say…just say NOOOOOOO!!!! Use your judgment about keeping them home or sending them on to school! SMH. Rowan county should have called it off today!!!”
Iredell-Statesville and Mooresville schools are closed. Davie County Schools are closed.
There was a multiple car accident on I-85 in the 77,000 block, just past exit 76.
Traffic lights are out along East Innes Street and in Granite Quarry. Crews have set up four-way stop signs at the intersection of East Innes and Jake Alexander Boulevard. The number of downed trees and power lines have blocked some roads.
Duke Energy now reports 21,302 people in Rowan without power. Power was out along South Salisbury Avenue in Spencer and North Main Street in Salisbury to just past Henderson Independent High School, although exterior lights were on at the school early this morning. Street lights were out all along that area. Power is also out along Stokes Ferry Road.
EnergyUnited reports 29,000 in a 10-county area without power.
Duke Energy’s outage list includes 26,891 in Davidson County. Hard hit counties include Alamance, with 54,040; Forsyth, with 33.497; Guilford with 123,228; and Randolph, with 45,630. Those number are growing.
We can expect additional accumulations of ice and up to an inch of sleet as temperatures hover around 30.
North winds at 10-20 mph are accompanied by gusts up to 30 mph, increasing the possibility of falling limbs and trees. The ground is saturated.
The National Weather service is advising against travel and asking people to report accumulations and damage by calling 1-800-267-8101. You can leave a message with your information and the specific location. You can also report to the National Weather Service Greenville Spartanburg Facebook or tweet using hashtag NWSGSP.