A month ago, after Donovan McNabb was lost for the season, the Philadelphia Eagles were crushed 45-21 in Indianapolis with Jeff Garcia at quarterback. They were dead. Buried. Out of it.

Now they’re a game away from winning the NFC East and will have a playoff game at home against one of the five 7-8 teams still alive for the NFC’s final wild-card spot. Thank you, Garcia, Brian Westbrook, Brian Dawkins, Lito Sheppard and the other Eagles who are playing at their best at the most critical time of the season.

Coming off four straight wins, including road victories against their three division opponents, the Eagles finish the regular season at home Sunday against Atlanta, one of the 7-8 teams vying for that wild-card spot and a possible trip back to Philly next week. A win by Philadelphia (9-6) would wrap up the East, which had been all but conceded to the Cowboys until the Eagles manhandled them 23-7 at Texas Stadium on Christmas Day.

Give much of the credit to the 36-year-old Garcia, a perfect fit for the West Coast offense, as he’s demonstrated in quarterbacking Philadelphia so dynamically. He’s been so good that if he is re-signed, Garcia might set off a quarterback controversy among the fickle Philly fans and the area’s loud talk radio shouters.

“I liked the way he came in with the leadership part of it,” coach Andy Reid says of his new quarterback. “When you are replacing your leader on your football team, you can come in and take a passive approach at times, and that is not the way this guy did it.”

San Diego, Baltimore, Indianapolis and New England have won the AFC divisions. The New York Jets can wrap up one wild-card spot if they beat Oakland at home today, and Denver will get the other if it beats San Francisco at home. If either or both lose, it brings Cincinnati, Jacksonville, Kansas City and Tennessee into the picture.

In addition to Philadelphia, Dallas has clinched an NFC wild-card spot, while Chicago, New Orleans and Seattle have won their divisions.

In other games today, Detroit is at Dallas; St. Louis at Minnesota; Cleveland at Houston; Carolina at New Orleans; New England at Tennessee; Seattle at Tampa Bay; Pittsburgh at Cincinnati; Jacksonville at Kansas City; Buffalo at Baltimore; Miami at Indianapolis; Arizona at San Diego; and Green Bay at Chicago on Sunday night in the final game of the regular season.

The two Bay Area teams look like the perfect patsies for teams that need only to win and get in. The Raiders are just bad and the 49ers, while improved, are a lot better at home.

If the Jets and Broncos make it, a lot of credit goes to their coaches, Eric Mangini and Mike Shanahan.

Of the four 8-7 teams here, the Bengals have the best shot at the playoffs. They get in if they win and the Jets lose and also make it with a win, a Denver loss and a Kansas City win. Tennessee is a long shot — it needs losses by the Broncos and Bengals and a win by the Chiefs — but it’s still a feel-good story for a team that started 0-5 and now has won six straight with rookie Vince Young at quarterback.

Another note of interest: the defending champion Steelers are out of contention and this could be the last game for Bill Cowher as their coach. Cowher, whose 15 years are the longest tenure with one team of any NFL coach, could step down, although he isn’t quite saying it. “That’s for next week,” Cowher said when asked about his decision.

The Rams need to win and have the Giants, Panthers and Falcons all lose.

These games are about seeding in the AFC.

If the Ravens win and the Chargers lose, Baltimore gets the first seed in the AFC playoffs and home-field advantage throughout. That’s because Baltimore beat San Diego on Oct. 1. The Ravens also need a win to ensure a first-round bye, something they could also get if they lose and the Colts do, too.

Even if the Colts don’t get that bye, they need a win just to get some momentum. After starting 9-0, they have lost four of their last six, primarily because they have the worst run defense in the NFL. It allowed journeyman Ron Dayne to rush for 153 yards in a loss in Houston last week.

The Chargers need only to win to ensure being at home as long as they are in the playoffs.

The Cowboys have a playoff spot, but lost their lead in the NFC East when they were shocked at home by the Eagles on Monday. Now they need a win and a Philadelphia loss to win the division.

If Detroit loses, it is likely to get the first pick in next April’s draft. If it is tied with Oakland, the team with the weaker schedule picks first, and as of this week, the Lions’ schedule is weaker.

The Seahawks, who have lost three straight, backed into the NFC West title last week when San Francisco lost. They might rest players, especially after one of the longest trips in the NFL. Still, they could use some momentum going in.

Did the Texans discover a running back when Dayne ran for 153 yards last week? Or was it just that he was running against the Colts, who give up ground yardage to everyone? This is Dayne’s seventh NFL season and rarely do running backs wait that long to fulfill their promise.

If the Giants lose, the Packers would jump to the top of wild-card list because they are the only 7-8 team other than the Giants with a winning conference record. But they are far behind the Giants in strength of victory and also could lose if they are in a two-way tie with St. Louis because they lost to the Rams.

A win here is possible. Chicago has clinched everything it can clinch, has injury problems and struggled the past two weeks to beat Tampa Bay and Detroit, who have six wins between them. Brian Griese relieved Rex Grossman at quarterback against the Lions last week, but Grossman is expected to start this week. 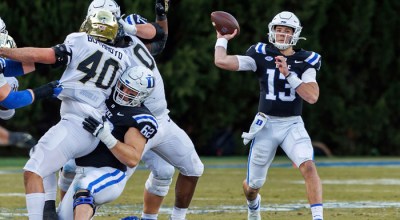