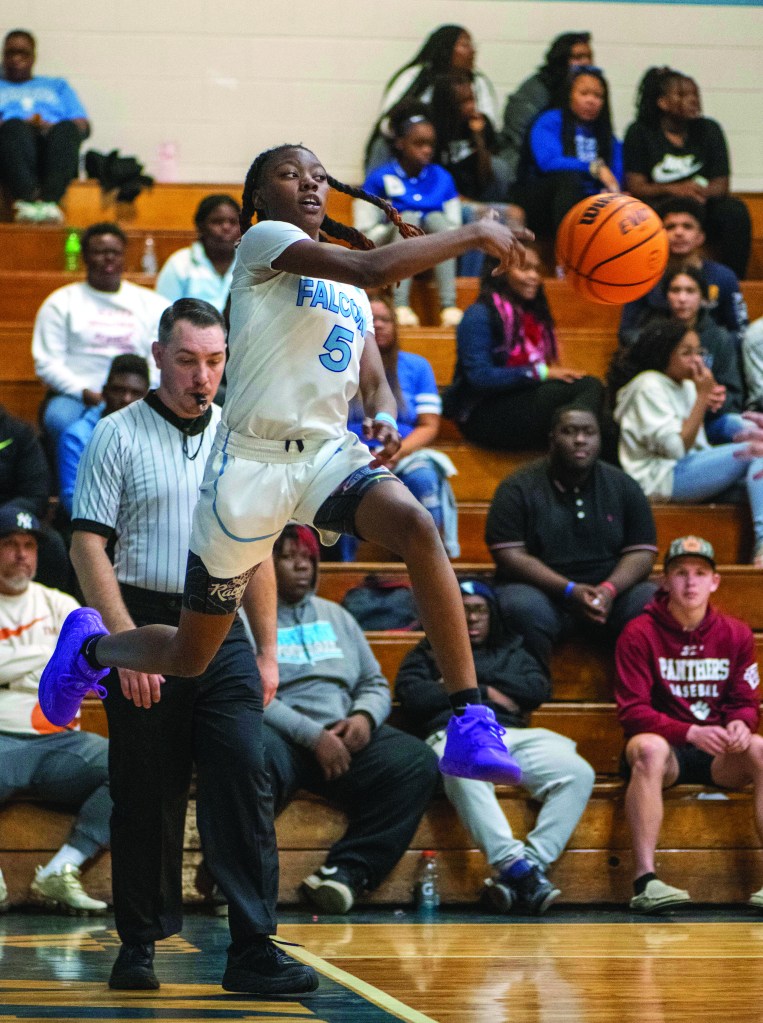 MOUNT ULLA — West Rowan’s girls pitched a shutout in the first quarter and went on to rout A.L. Brown 73-12 on Wednesday.

The Falcons, who are 9-0 in the South Piedmont Conference, are 18-0 overall.

Ranked No. 1 in 3A West RPI, West has been beating people by ridiculous scores since the season started. It’s officially the best start in program history.

Thompson got the Falcons rolling with a hot first quarter.

Phifer and Arnold combined for 17 in the second quarter.

LANDIS — The avalanche continued for West Rowan’s strong girls, as they pummeled South Rowan 82-25 on Tuesday.

West had too much size, speed and depth for the Raiders, and it was over quickly.

Basically, it was a non-stop layup line for the Falcons. Their aggressive defense trapped South ball-handlers and forced hurried passes, and they got easy 2s off steals and turnovers.

“We did better than we did against them last time,” said always upbeat South coach Alex Allen. “We’ll build on that.”

Phifer got into the lane early and often and scored a season-high 25 for West.  Arnold scored 16.  Clarke had 14.  Thompson added 11.

West is home against Northwest Cabarrus, the second-place team in the SPC, on Friday. Central Cabarrus is next for the Raiders.

GRANITE QUARRY — Season splits aren’t unusual, but it is unusual to lose by 30 to a team that you beat the first time around.

East Rowan’s girls were smacked at home 66-36 on Tuesday by a Northwest Cabarrus team that the Mustangs upset on the road 43-42 early in the season.

Northwest (11-5, 7-2), which has a very good rebounding team, obviously has improved a great deal since the first meeting and is now in second place in the South Piedmont Conference.

East (9-9, 5-4) has struggled some since getting off to a fast start in the league. Those struggles included a loss to sixth-place South Rowan.

East welcomed Lindsey Cook back from an ankle injury, but the biggest change for East since early in the season is the injury that knocked out Mary Church, who was doing a lot of the ball-handling while contributing nine points per game.

Northwest just about settled things in the first quarter, jumping out to a 19-4 lead.

East was able to trade buckets in the middle two quarters, but never could find any way to score consistently.

The Trojans put together a big finish with a 25-point fourth quarter to win by 30.

HUNTERSVILLE — As expected, it’s been a challenging season for a young Carson girls team.

The Cougars lost 63-26 at Lake Norman Charter on Tuesday.

The Knights settled it with an overwhelming 27-6 second quarter.

It was a typical South Piedmont Conference game for Carson, which averages 31 points per game, while allowing 55 per game.

Allie Martin scored nine points for the Cougars. She got seven from the foul line.

The Knights got 18 points from Kailyn Kirkpatrick. Jade Taylor had 10 rebounds. LNC committed only 12 turnovers, blocked five shots and shot a solid 42 percent.