Maryland holds off No. 25 NC State in Duke’s Mayo Bowl 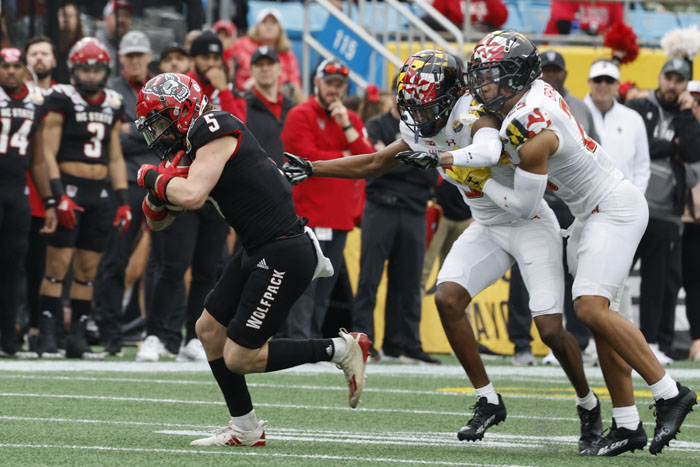 That’s why he donned an oversized red Noggin Boss hat with a Maryland emblem on it as he sat quietly in a chair awaiting his postgame fate Friday — a bucket of mayonnaise being dumped over his head.

Locksley had agreed to do it for charity weeks ahead of the Duke’s Mayo Bowl, saying he’d do anything if it meant winning.

“A former Terp developed the hat and it gave me a little bit of cover” from the mayonnaise, Locksley said.

Tagovailoa wasn’t perfect, finishing 19 of 37 for 221 yards with two interceptions. Roman Hemby ran for 65 yards rushing on 24 carries for Maryland (8-5), which won its second straight bowl.

Jakorian Bennett, who helped seal the win with a late interception, was named the game’s Most Valuable Player.

“The last four years we have talked about taking the next step, well the next step for us is to start competing for Big Ten championships,” Locksley said. “There are some people out there that will laugh at us and think that is funny, but if you take a Terp for granted, I promise you, we will make you pay.”

Ben Finley, one of four different starting quarterbacks for North Carolina State this season, completed 22 of 48 passes for 269 yards with two interceptions and couldn’t find the end zone.

All of N.C. State’s points came off the leg of All-American kicker Christopher Dunn, who converted field goals of 38, 19, 38 and 26 yards.

The Terrapins’ defense held N.C. State to 27 yards rushing on 18 carries and kept the Wolfpack out of the end zone.

“It’s tough when you are missing as many parts as we were but a lot of people are right now,” said NC State coach Dave Doeren. “It was a myriad of things on that side of the ball.”

“It was a coach’s decision and sometimes you have to do things to send a message,” Locksley said.

Tagovailoa was not made available for interviews after the game.

Maryland took a 10-9 lead in the second quarter when Tagovailoa found Smith in the back left corner of the end zone for the game’s only touchdown.

North Carolina State (8-5) certainly had its chances, penetrating the Maryland 25-yard line four times only to come away with four field goals.

The biggest opportunity to seize momentum came in the fourth quarter when Rakeim Ashford intercepted Tagovailoa at the N.C. State 35. But the Terrapins defense answered with a third-down stop and forced a field goal.

N.C. State had one last chance to win it when they got the ball back with 2:34 left in the game at their own 25, but Bennett’s leaping interception on a first down throw clinched the victory.

The senior decided to play in the bowl game even as many of his teammates opted out.

“It was a no-brainer,” Bennett said. “I get the opportunity to play the game that I love, so why not?’

Dunn won the Lou Groza Award, which is given annually to the nation’s best kicker, and finished the season converting 28 of 29 field goal tries and all 30 extra-point attempts for the Wolfpack.

“He has been everything to us,” Doeren said. “… I think he is a great example of persistence. He’s very talented and he’s clutch.”

Maryland: The Terrapins have a lot of players who opted out of the bowl game, including three wide receivers who declared for the NFL draft. They’ll need to replenish that position, although Smith looks like a keeper.

NC State: Quarterback is going to be an issue the Wolfpack will need to address this offseason. With Devin Leary transferring to Kentucky, there’s no solid answer. Finley struggled with his accuracy and leading the offense. It didn’t help that North Carolina State’s running game was nonexistent. Doeren said it is time for the Wolfpack to evolve and change on offense and is excited about new offensive coordinator Robert Anae.