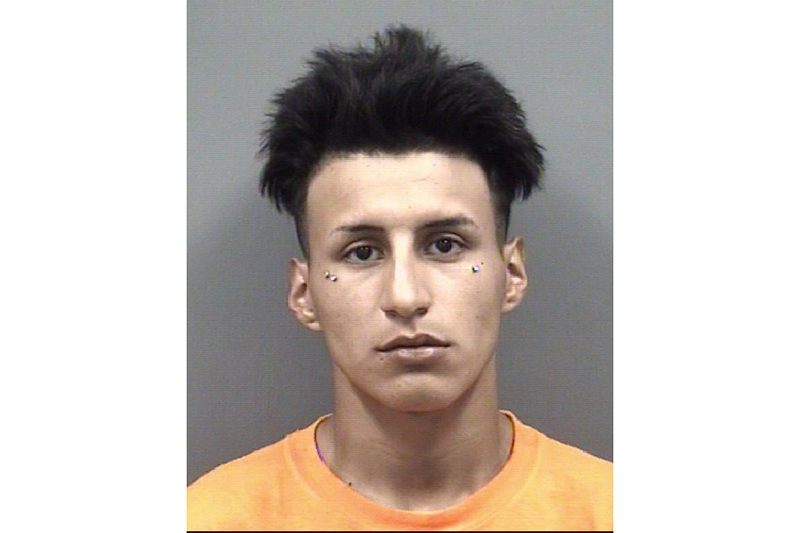 In 2019, Michael Elijah Earley got into a car to sell marijuana to someone. The sale went sideways, and Earley was murdered, his body dismembered, burned and buried.

Friday afternoon, the man who killed Earley, Carlos Rosas, Jr., now 23, plead guilty to five charges, including second-degree murder, felony concealment or destruction of remains, first-degree kidnapping, robbery with a dangerous weapon and obstruction of justice. He was eligible to be sentenced to life in prison without parole, which was mentioned repeatedly in the court room, but documents outlining the actual sentencing show Rosas received a total of a minimum of 560 to 730 months in prison  or 46 years 8 months to 60 years 10 months. Defense counsel noted Rosas was given a lighter sentence because he had no prior criminal record.

During Rosas’ court appearance, District Attorney Brandy Cook read a detailed account of the day Earley died, and one of the most horrific details that emerged was that after striking Earley in the head with an aluminum baseball bat, fracturing his skull, Rosas not only did not seek medical attention for the victim, but he cut up the body in an effort to dispose of it, likely while Earley was still breathing.

On May 6, 2019, Earley, 19, was reported missing by his girlfriend when he did not return from a drug sale the night before. She told police she last saw Earley around 10 p.m. on May 5.

Detectives were able to determine who Earley met to make the sale, and in addition to Rosas, arrested Madison Drew Harrington and Lauren Grimes, who were 18 and 19 at the time. Both women have been charged as accessories after the fact.

Rosas has maintained that he was in the back seat of Grimes’ black Toyota Camry when what was supposed to be a simple pot purchase went off the rails. He claimed that he had taken a baseball bat with him because he thought something was off, and when he saw Earley allegedly choking Grimes, he reacted. There were also claims that Earley had a knife.

Cook said no knife had ever been found, nor any evidence to substantiate Rosas’ claims that Earley was the aggressor.

Instead, Cook explained that the charge of robbery with a dangerous weapon applied because Rosas kept the marijuana, and during the effort to hold on to it, he struck Earley with the bat.

“He said when he hit Mr. Earley the first time, he ‘cracked his skull,'” said Cook during the hearing. “Then, when Mr. Earley was on the ground and helpless, Mr. Rosas hit him twice more.” An autopsy determined Earley died from multiple fractures to the skull and subsequent dismemberment.

In addition to the five charges, there were two aggravating factors to consider, said Cook. The fact that Earley was on the ground, defenseless and clearly wounded when Earley struck him twice more was, she said, “especially heinous, atrocious and cruel.” The fact that instead of seeking any medical attention for Earley, Rosas picked him up and put him in the back of Grimes’ car, then covered him up so his body was not visible, even though Earley was still breathing at the time, speaks to “an unusual depravity of mind,” she added.

After putting Earley in the floor of the back seat and covering his body, Rosas, Grimes and Harrington had to wait for a family member to come and help get the car out of the ditch it was in. Then, the trio took Earley’s body to Rosas’ house. Rosas, said Cook, had to go into the house to retrieve materials to cut up the body. He then put the body parts in plastic bags, burning parts in a burn barrel and burying others.

Rosas admitted to the crime not long after investigators arrived at his home, showing them the burn barrel and leading them to the shallow grave in the woods behind his home.

“In my 20 years of police work, this is the most brutal crime I have ever worked,” said lead investigator Sgt. Patrick Schmeltzer of the Rowan County Sheriff’s Office. “I think this one will stay with me a long time – probably forever.” He added that in his interviews with Rosas, he has “never once seen one iota of remorse.”

“It’s a very sad story, because two families have been destroyed,” he said. “One has lost a son forever, and the other lost a son to a life in prison.”

The two women still face trial on their charges, and in the description she read today, Cook said both claimed they were too afraid of Rosas to call for help, from police or anyone else. Those claims will likely be repeated in their trials.

Earley’s mother, Jessica, spoke to the court Friday through tears.

“I still do not know everything that he did to my son,” she said. “I have to plug my ears, because I just cannot bear to hear it. I never let my sons have time to get in trouble. They had to join something – I didn’t care what, but by the time they got home, they were too tired to get in trouble. My children always had me, and I felt sorry for children who didn’t grow up the way mine did. I pray everyone looks at this like this is their child, because it could be.”

She said she “searched for days for my son – I believed he was alive,” and now, she said, she has constant nightmares, and does not believe she will ever live anything like a normal life again.

Cook said Earley’s mother, step-father, Brian Surratt, and father were all in agreement on the plea agreement “largely because of the amount of jail time.” The guilty plea, according to Cook, meant “a guaranteed or known result, a significant prison sentence for the defendant, and will mean the family will not have to endure a painful jury trial, and there would be no chance for appeal on any possible procedural error.”