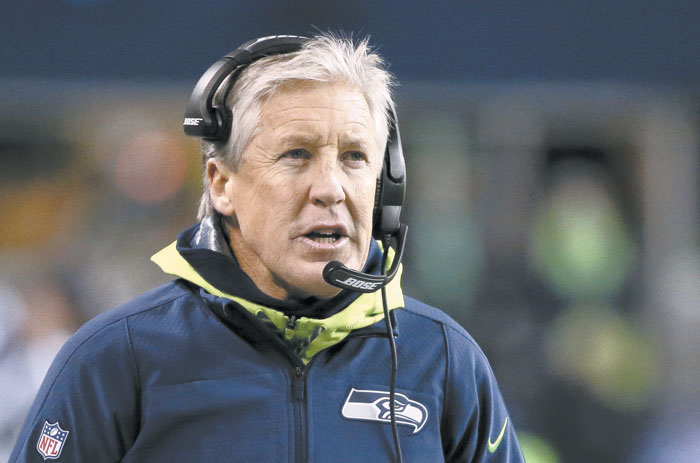 Seattle’s Pete Carroll says, ‘This game is enormous for us right now, so we have to go get it and do whatever it takes to get that done.’ (AP Photo/Elaine Thompson, File)

SEATTLE — Pete Carroll was really thrown for a loop when the NFL added a 17th game to the schedule last season.

“In my mind, I’m going to be in the fourth quarter when we get to next week. We are not there yet,” Seattle’s veteran head coach said.

But the Seahawks are clearly in the important quarter of the season with a potentially defining two-game span beginning Sunday when Seattle hosts Carolina.

That’s followed by a quick turnaround and a divisional showdown with San Francisco next Thursday. It’s a five-day span that will likely decide if Seattle (7-5) has a chance at winning the NFC West or if it will be fighting for one of the final playoff spots in the NFC.

Before worrying about their division foe, the Seahawks can’t overlook the Panthers. “This game is enormous for us right now, so we have to go get it and do whatever it takes to get that done,” Carroll said.

Two weeks ago, the Panthers did Seattle a favor with their victory over Denver, which only improved the Seahawks’ draft position as owners of the Broncos’ first-round pick in 2023, thanks to the Russell Wilson trade.

The Panthers (4-8) should be healthy and well rested coming off their bye week. It’ll be the second straight start for Sam Darnold at quarterback, but it’s the Panthers’ run game that has taken off in their past two wins. Carolina rushed for 232 yards in beating Atlanta and had 185 yards in the win over Denver. That’s where Seattle has struggled of late, allowing at least 160 yards rushing in each of its past three games.

And while the Panthers are tied for the fourth-worst record in the NFC, they’re only two games out of first place in the NFC South. But getting a win in Seattle means Carolina solving its road woes, going 0-5 away from home so far this season.

Burns has five sacks in the last four games, giving him a career-high 10 for the season. The team record is shared by Hall of Famer Kevin Greene and Greg Hardy, who each had 15.

“That’s my goal is to beat the record,” Burns said. “I need 5½ or six sacks, and that would be awesome.”

Burns said he didn’t know about the team record until someone told him about it this week.

Geno Smith’s season for Seattle has generated a significant amount of worthy recognition. He can put his name in the NFL record books with another solid outing against the Panthers. Smith has posted at least a 60% completion percentage and a passer rating of 80 or higher in the first 12 games of this season. It’s tied for the longest streak to begin a season along with Peyton Manning (2009) and Aaron Rodgers (2011).

Smith can take over the top spot this week with another solid game. Smith has posted a passer rating of 100 or higher in eight of the past nine games and his lowest completion percentage is 64%.

Darnold is sporting a red beard, one he started growing out before leading the Panthers to a 23-10 win over the Denver Broncos in his first start of the season before the bye week. “I’m obviously going to keep it as long as we keep winning games,” Darnold said.

Wilks named Darnold the starter immediately after the Denver win, and the team waived Baker Mayfield on Monday. P.J. Walker will serve as the team’s No. 2 quarterback.

“Baker was nothing but the best to me and all of the guys in the locker room and the coaching staff, a total class act,” Darnold said. “He was such a great teammate to have in the locker room. It’s a tough business.”

For a while, Seattle and Carolina were matching up as though they were division foes. The teams faced off in the regular season every year between 2012-16 and again in 2018-19. That stretch also included playoff meetings in the 2014 and 2015 playoffs.

The Seahawks have won the last three regular-season games played in the series, including a 40-7 romp in 2016, the last time the teams met in Seattle.

PANTHERS PLAYER TO WATCH: RB D’Onta Foreman. The journeyman running back has found a home in Carolina, rushing for 100 yards in four of his past six games since the team traded Christian McCaffrey to the San Francisco 49ers. Foreman has run for 526 yards and four touchdowns during that span, while averaging 4.6 yards per carry. At 6-foot-1 and 236 pounds, Foreman is a load to bring down especially late in the games when the opposing defense wears down.

SEAHAWKS PLAYER TO WATCH: QB Geno Smith has redefined many of the preconceived notions about his ability as a quarterback this season. He can add another mark to his remarkable season with a solid performance against the Panthers. This week, Smith can become the first QB in league history to start the season with 13 straight games with at least 60% completion rate and a passer rating of 80 or higher. Smith is currently tied with Aaron Rodgers (2011) and Peyton Manning (2009) at 12.

KEY MATCHUP: Can Seattle stop Carolina’s run game? The Seahawks were terrific at stopping the run during their four-game win streak at midseason. Since then, opponents have made adjustments and found ways to exploit Seattle’s defense. The Seahawks have given up 615 yards and a 5.3 yards per attempt average over the past three games. Carolina has rushed for at least 169 yards in four of the past six games.

KEY INJURIES: Panthers interim coach Steve Wilks said that Foreman and DE Brian Burns, who sustained injuries prior to the bye week, are expected to play. Foreman did miss practice on Wednesday. … Seattle has major questions at running back because of injuries to Kenneth Walker III (ankle) and Deejay Dallas (ankle). The Seahawks already lost Rashaad Penny for the regular season to a leg injury.

SERIES NOTES: Despite being in different divisions the Seahawks and Panthers have played fairly often since 2012. The teams met every year in the regular season from 2012-16 and again in 2018-19. They’ve also met three times in the playoffs, most famously the 2005 NFC championship game in Seattle won by the Seahawks to clinch their first Super Bowl berth.

STATS AND STUFF: The Panthers are 0-5 on the road this season. … The Seahawks are the only opponent remaining on the Panthers’ schedule with a winning record. … Interim head coach Steve Wilks is 3-4 since taking over for the fired Matt Rhule. … QB Sam Darnold will make his second start of the season after leading Carolina to a win over the Denver Broncos before the bye week. … P.J. Walker will be the team’s backup QB after Baker Mayfield was released earlier in the week. … The Panthers have allowed 26 sacks this season, 11th fewest in the league — a marked improvement over the previous two seasons. … DE Brian Burns already has a career-high 10 sacks, including five in the past four games. … LB Shaq Thompson needs 11 tackles for his fourth straight 100-tackle season. … The Seahawks play four of their final five games at home, the only road trip to Kansas City on Dec. 24. … Smith leads the NFL in completion rate at 72.7% and is the only QB in the league above 70%. … Smith’s 367 yards passing last week was a career high. … WR Tyler Lockett has touchdown catches in his previous five games and needs one to set the franchise record for consecutive games with a TD reception. Lockett needs 164 yards receiving to become the second player in franchise history with four straight 1,000-yard seasons joining Steve Largent. … OLB Uchenna Nwosu had two sacks last week adding to his career-high total of nine for the season. … CB Tariq Woolen tied for the league lead with six interceptions. He had set the franchise rookie record for interceptions in a season. … The Seahawks are tied for second in the league with 21 takeaways.

FANTASY TIP: WR D.J. Moore was never a factor this season when Baker Mayfield was under center. But with Darnold back at quarterback, Moore had 103 yards receiving and a touchdown prior to the bye week against the Broncos and could be in for a decent week against a Seattle team that is 20th in the league in pass defense.