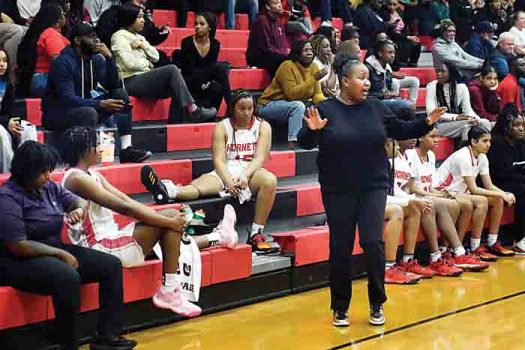 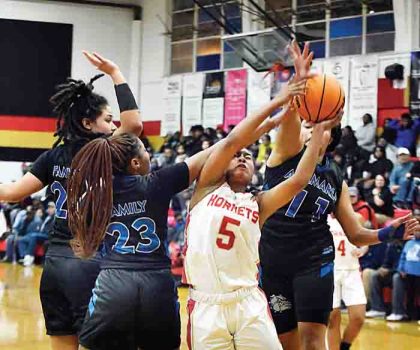 Salisbury’s Kyla Bryant tries to shoot under the basket. photo by Wayne Hinshaw, for the Salisbury Post 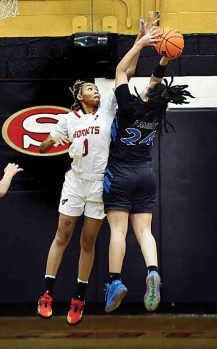 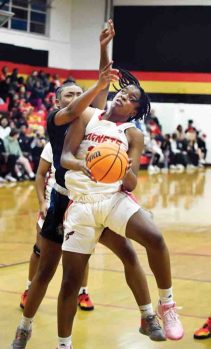 An Albemarle player tries to stop a shot. photo by Wayne Hinshaw, for the Salisbury Post 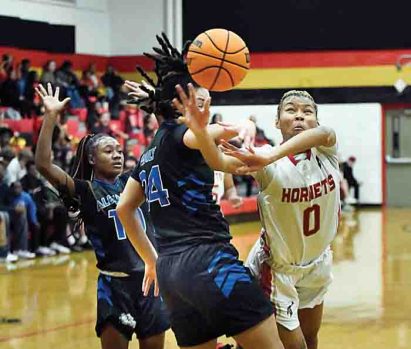 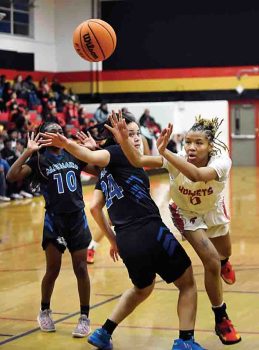 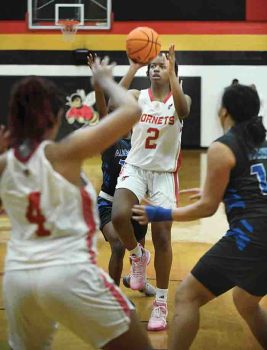 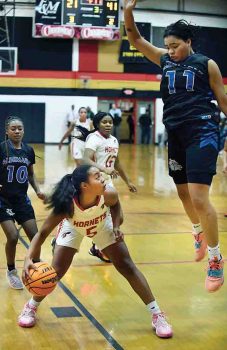 Salisbury’s Kyla Bryant 5 gets a defender off her feet. photo by Wayne Hinshaw, for the Salisbury Post

“Our team motto is if someone goes down, the next person has to fill in,” 10th-year coach Lakai Brice said after Salisbury earned a 60-34 victory. “I don’t ever want someone to go down, but these girls are always ready to step in and play. It’s not the bench we had last year but they can all play.”

The Hornets (4-0) — winners of 31 straight games dating to last season — launch their conference schedule Friday night at Thomasville, but may be without 5-foot-11 junior MaKayla Noble and 5-9 senior Mary Morgan. Noble suffered a left knee injury on a drive to the basket just 17 seconds into the second half and never returned. She is scheduled to have an MRI today.

“I tried to plant my foot and my knee hyperextended,” Noble said after contributing 10 points, a handful of important rebounds and some air-tight defense. “Then I heard a crack in there.”

That can’t be comforting to Brice, who was forced to use 11 players. “I’m praying that there’s nothing wrong with her and everything’s all right and it was just a minor thing,” she said. “It was a scary moment when it happened because MaKayla has been playing lights-out.”

Morgan suffered a sprained right ankle while battling for offensive position with 36.2 seconds remaining in the third quarter. Like her teammate, she wasn’t able to return.

“Mary took a wrong cut and went down,” Brice explained. “She twisted her ankle, so we iced it up and rested her. She’ll be fine but she may not play against Thomasville. Right now we just need for her to get healthy. She’s been an important part of our success.”

Without Noble and Morgan, Salisbury turned to understudies Torese Evans — a sophomore point guard — and Shamya Arnold, junior play-caller. Evans scored on a fastbreak layup that gave SHS a 54-28 lead with 3:06 to play. Arnold busted out with a 12-point effort, including eight in the second half.

“Hate that we lost MaKayla and Mary,” said senior guard Kyla Bryant, Salisbury’s high scorer with 25 points. “But we handled the pressure and limited our turnovers. I scored when I need to score and hit some key free throws. And the girls off the bench kept us energized.”

The outcome was all-but-secured by the second quarter. Albemarle (2-2), a 1A school from the YVC with an early season win against North Rowan, never led but only trailed 10-7 following a pretty right-side set shot by Amari Baldwin. Salisbury responded with a 16-0 scoring spree that featured three authoritative layups by senior guard Icesis Nwafor and a power drive for a basket by Noble. Bryant’s back-door layup and 14-footer from the right elbow helped Salisbury build a convincing 33-14 halftime advantage.

“We’ve just got to relax and execute better,” 10th-year Albemarle coach Eric Davis said. “We’ve got 10 freshmen and sophomores, so we’re young. We got rattled during that run — out of 16 points, what were there, six or seven off of turnovers? We just needed to settle down.”

So while the Hornets forced 24 Albemarle turnovers a prevailed easily, it’s a victory that leaves a residue of concern — enough that both Brice and Bryant uttered the word :underdog” as the league season dawns.

“I think we’ll be ready,” Bryant said. “We’re going to open people’s eyes. This team is as talented as last year’s. It’s just that people haven’t noticed yet.”

Confidence isn’t the problem, according to Brice.

“The reason they play with such confidence is because they feel like they’re underdogs,” she concluded. “It’s because they’ve lost a lot. They lost Rachel McCullough to graduation. They lost Jaleiah Gibson, a top defensive player. And they lost Jamecia Huntley to West Rowan. People are discounting them, saying they’re not as good as last year. What they have is the X factor — people forget about them. That’s a strong motive.”

NOTES: Albemarle made only 12 field goals. Baldwin had a team-best 10 points and added six rebounds, four steals and three assists. … Salisbury placed three scorers in double figures and led by as many as 28 points when six-foot senior Haley Dalton hit a layup with 1:15 remaining. … The Hornets haven’t lost a game since falling 62-44 to Apex Friendship on Nov. 27, 2021 — more than a year ago.