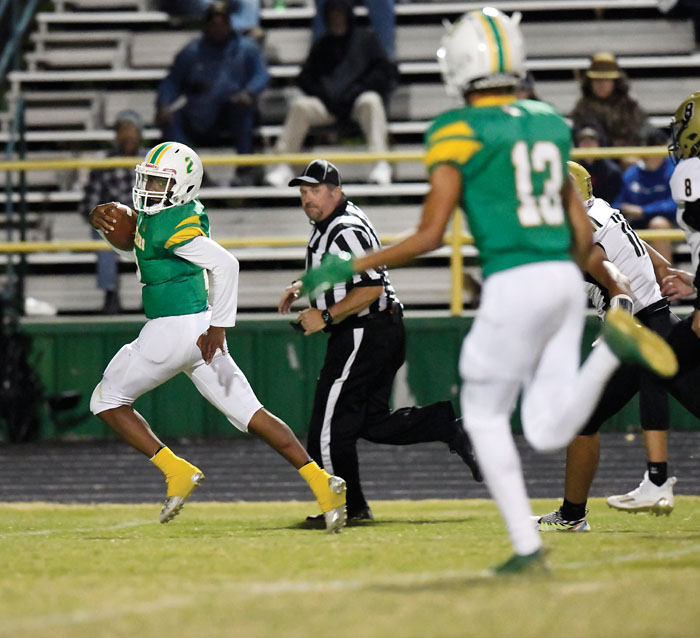 North's Jaemias Morrow heads for the end zone on a long touchdown run. File photo by Wayne Hinshaw, for the Salisbury Post

SPENCER — It was an above-average football season for Rowan County kickers and punters, but the Post’s choice for Rowan County Special Teams Player of the Year is kickoff returner Jaemias Morrow.

“Kickoff returns are something I didn’t do very well earlier in my career,” Morrow said. “But this year I took my time and worked hard at it. It was a way to make a play to help us out, and I had some returns that picked up the team.”

This is the fifth season a Special Teams Player of the Year has been recognized by the Post. Morrow is the first from North to be honored and is the second return man to be chosen. Salisbury returner Cameron Gill won the first award. Salisbury kicker Wade Robins was recognized the last two seasons. West Rowan kicker Federico Cruz won the year before Robins took over.

Morrow, is, as you probably know, North’s primary running back. His 141 carries for 1,375 yards (that’s almost 10 yards per carry) and 21 rushing TDs would have topped Rowan County some years, but this was a monster 2,000-yard season for Salisbury’s workhorse back JyMikaah Wells.

Morrow also was a starting outside linebacker on defense, contributing two sacks, two interceptions and 39 tackles.

“He’s a football player, a guy who could play anywhere on the field,” North head coach Nygel Pearson said. “At some point during the season, he played on every special teams unit for us.”

Morrow totaled 28 touchdowns for a 7-5 team, as he scored in a variety of ways — receptions, fumble returns, interceptions — in addition to the rushes and kickoffs. He added eight 2-point conversions.

“If they want me to throw a touchdown pass next year, I think I can,” Morrow said with a laugh.

Pearson didn’t promise any passing attempts for Morrow in 2023, but he will get a shot as a punt returner.

If you’re wondering why teams kept kicking off in Morrow’s direction, the short answer to that is Amari McArthur.

North usually had Morrow and McArthur back deep and most teams chose to kick it to the 5-foot-10, 180-pound Morrow rather than the 6-foot-2 McArthur, a receiver/safety who is one of the county’s fastest sprinters.

“Teams had to pick their poison, so Jaemias got his chances,” Pearson said. “It was a luxury for us to have two guys like that.”

Morrow looked at those KOR opportunities as a chance to change momentum in a hurry.

“I remember the one I got against West, they’d just scored and our guys had their heads down,” Morrow said. “That kick kind of rolled to me, and I picked it up and ran to my right. I broke three or four tackles, and then I had some blockers in front of me.”

Morrow, who is currently playing basketball for the Cavaliers, brings a combination of quickness and strength to all his football roles. He can break tackles — and he also can make people miss.

He’s fearless, and that’s a key ingredient for a kickoff returner. You have to have a willingness to head for the traffic at full speed, and then look for daylight.

“The one at East Davidson, they kicked it to me down around the 2 or 3 yard line, and I hit the middle really hard,” Morrow said. “Then it was just me and a blocker, and he took out the kicker.”

The return against Salisbury in the regular-season finale is probably the one Morrow will remember the longest.

Salisbury had a lot of speed, a lot of athletes on the field, but Morrow put it in the end zone.

“I broke some tackles on that one,” Morrow said. “But mostly I just kept running and running.”

He kept running all season. His only rest periods came when North enjoyed an insurmountable lead.