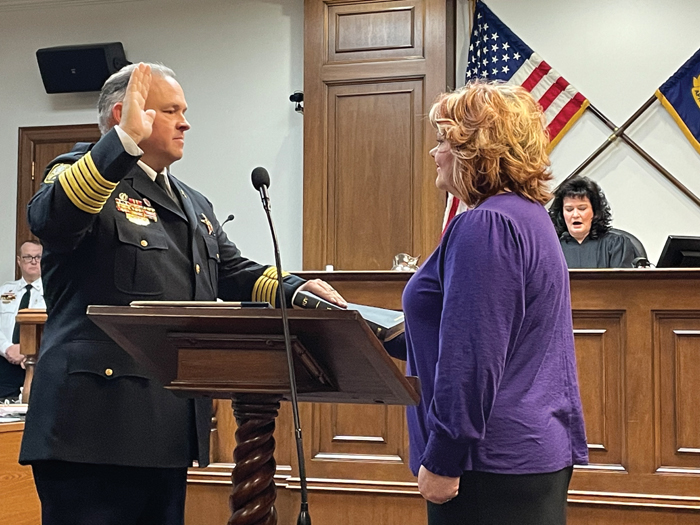 Sheriff Travis Allen is sworn in by Judge April Wood with the sheriff's wife, Michelle, holding the Bible for the ceremony.

SALISBURY — The newly-elected Rowan County Sheriff Travis Allen and his sworn deputies, including those who work in the Rowan County Detention Center, were sworn in Monday morning in the courthouse.

Allen took the oath of office from a Bible held by his wife, Michelle, and was sworn in by Judge April Wood.

“I have known both Travis and his wife since college,” said Wood. “When I was taking criminal justice classes with Travis, I knew his was going to do great things. He is absolutely the same man he was 30 years ago, and not many people can say that.”

The Rowan County Sheriff’s Office has more than 140 sworn positions, including full- and part-time officers, though retirements have temporarily reduced that number. All were sworn in Monday morning, as were the court clerks and assistant clerks, and RCSO Chaplain Michael Taylor.

Allen’s term will be for four years, and every election, not only must the sheriff be sworn again, but so must all deputies.

Allen was joined by his wife, sons Avery, Bradley and Wesley, daughter and son-in-law Katelyn and Hunter White, parents Kay and Joe Allen, in-laws Linda and Melvin Deal, and two aunts and uncles at the ceremony, and following all the swearing in, he had a few words for his new team.

He pointed out that there had not been time to order a new dress uniform for the ceremony, so he was wearing one that belongs to Sheriff George Wilhelm, who had hired him 25 years ago. Then he noted that his shirt was from the department supply room and his shoes had probably been worn by an Explorer.

“In fact, the only thing I’m wearing that is mine is my underclothes,” he said, to laughter. “But that’s the way I see what we do — we are placeholders for something much larger.”

He reached for the Biblical story Elijah and his disciple, Elisha, to explain how he sees the department going forward.

“We’ve had some long-term people retire, we’ve lost a lot of years of knowledge and experience,” he said. “But when they left, they left you all well-trained and prepared to carry on. And so, like when Elijah left and everyone worried about what would happen, and Elisha picked up the cloak and carried on, I am asking you today to pick up the cloak and carry on.

He said there are four expectations he has for deputies.

“Be compassionate when you can; have courage in conflict; have character at all times; be a conquerer of evil,” he said, citing the oft repeated quote (including by President John F. Kennedy) “The only thing necessary for the triumph of evil is for good men to do nothing.”

“You are what stands between anarchy and chaos, and our world,” he went on. “We are servants of the citizens of Rowan County. Treat everyone like your mother until they give you a reason not to.”