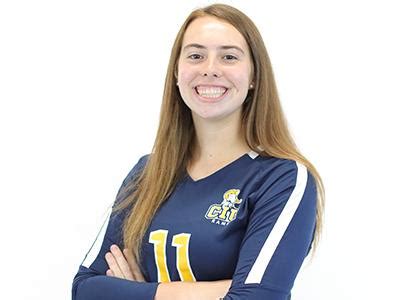 She was earlier named Appalachian Athletic Conference Player of the Year after breaking the school record for kills.

In addition to competing in NAIA, Columbia International competes in the National Christian College Athletic Association.

Rymer was named NCCAA South Region Player of the Year and has more honors on the way.

Javon Hargrave (North Rowan) had five tackles, including another sack, in  Philadelphia’s 35-10 win against Tennessee on Sunday.

Jalon Walker (Salisbury) has played in all 13 games  for the top-ranked Georgia Bulldogs.

Walker has been credited with eight tackles and four QB hurries and he’s blocked a punt.

Zeek Biggers (West Rowan) played in all 12 games for Georgia Tech and was credited with 32 tackles (19 solos). He blocked a kick and knocked down a pass.

Abigail Wilson had eight points and seven rebounds for UNC Asheville in a 64-51 win against Western Carolina.

Bryanna Troutman (Salisbury) had 10 points and nine rebounds in 16 minutes as Wingate romped 75-48 against King.

Hannah Isley (Carson) had five points, eight rebounds and three blocks for Pfeiffer in a 61-49 loss to Mary Baldwin.

• Jaleiah Gibson (Salisbury) had four points and seven rebounds for Pfeiffer in a 68-60 loss to Johnson & Wales.

Colbie Perry (Carson) has made five 3-pointers for Converse.

At the JDL Fast Track in Winston-Salem, Pfeiffer competed in the Early Bird Invitational.

Madison Lowery (South Rowan) broke the Pfeiffer record in the women’s indoor mile with a clocking of 5:08.15. She also broke the meet record.

Pfeiffer’s Elizabeth Jones (North Hills) broke the school record with an effort of 13.87 meters in the weight throw.

The 2023  Carolinas Classis All-Star Basketball Games will be plaed at Wilmington’s Hoggard High on March 25.

Rowan County teams are on the road, with Carson at Concord, West Rowan at Northwest Cabarrus, South Rowan at Central Cabarrus and East Rowan at Lake Norman Charter.

Carson placed third in the Bobby Lloyd Inviational at Thomasville.

Carson’s Christian Kluttz was champion at 138 pounds. Tristin Clawson won at 145, and Trey  Hill  was first at 195.

Carson Drye was runner-up at 152. Joseph Little placed third at 106.

In the Warrior Two-Man Scramble, the team of Logan Shuping-Eric Edwards shot 59-65 — 124 in the Championship Flight.

Shuping-Edwards won the scorecard playoff to take the title.

• Closest to the pin winners in the Two-Man Texas Scramble were Jon Waller and Tom Hurd (No. 3), Bubba Henderson and Russ Tanis (No. 6), Blake Wray and William Little (No. 8), Don Hartsoe and Logan Shuping (No. 12) and Scott Tucker and Derek Lipe (No. 16).

On a chilly Sunday, the McCanless Couples played a Captain’s Choice event.

JD had closest to the pin.