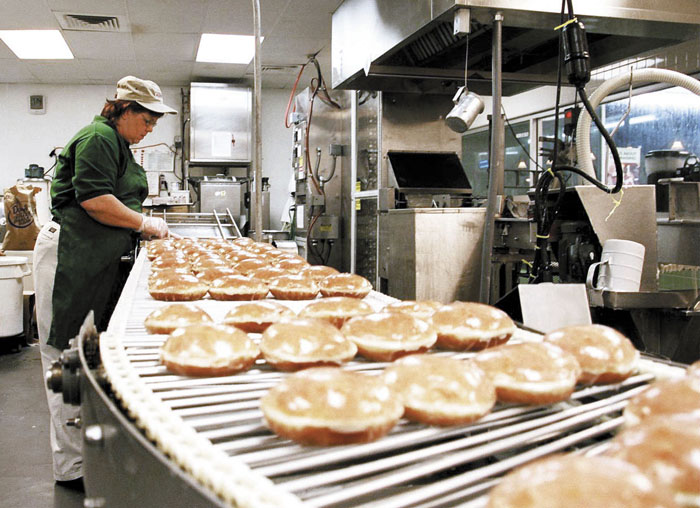 Krispy Kreme has been making doughnuts on West Innes Street since the store opened in 1973. File photo by Ben Clark

SALISBURY — One child of Krispy Kreme founder Vernon Rudolph offered this advice to a group this past week: talk to your parents while they’re living to find out things you won’t be able to after they’re gone.

Sandy and Carver Rudolph, sons of the doughnut chain founder, spoke the Rotary Club of Rowan County on Thursday morning at the Trinity Oaks retirement community.

The Rudolph brothers each detailed the history of Krispy Kreme and its origins in Winston-Salem. Vernon initially chose that location for his first official store because that was also the home of the brand of cigarettes he smoked: Camels.

“Krispy Kreme started out wholesale, it wasn’t retail in the beginning. So growing up working on Stratford Road in Winston, we ran 9, 10, 11 routes everyday to go out to the grocery stores. So, you almost had to be open 24/7,” Sandy Rudolph said about the early days of Krispy Kreme.

Carver Rudolph read aloud a letter that his father had written years before and shared his thoughts on what his loss has meant to him and his family.

“After he left us at the age of 58 in 1973, I’ve been asking a lot of questions. Sandy and I have dug up a lot of information that we never knew and it’s been really gratifying, but we didn’t take the opportunity to ask those questions when he was here and wanted to tell us. I would encourage everybody here if you got a living parent you need to go talk to them about stuff that you wanna know about when they’re gone,” Carver Rudolph said.

Rotary is designed for businesses and members of a community to collaborate to help others who are in need.

“It does so much of the legwork. Everything’s planned, they tell you where to be, what to do, what to bring, I love it. It makes things simpler to get involved without having to be quite so on point about it. The group does the work together,” Rotary Club member Erin Moody said.

Former Rotary Club President Nick Langdon added: “The theory of our club being that so many of us years ago were in employed and you had to be at work at 8 o’clock or shortly after and you couldn’t escape from work during the day, so we have a morning club. So that’s who we are.” 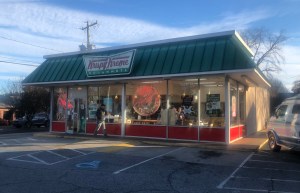 The Salisbury Krispy Kreme has been around since the early 1970s. 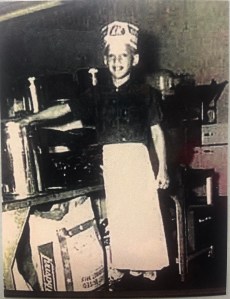 “Sandy Rudolph at 9-years-old, making cake doughnuts in the lab.” 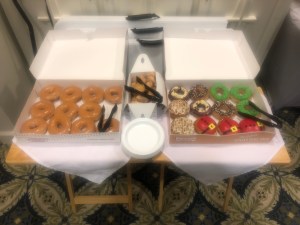 Of course, Krispy Kreme doughnuts were provided for the Rotary Club meeting.