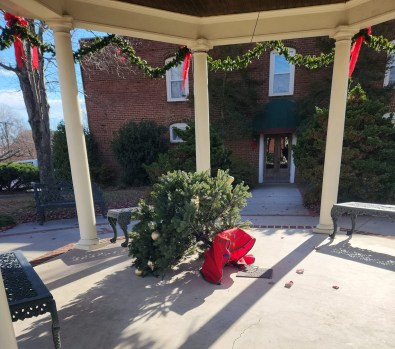 Someone took the Rockwell Christmas tree from its location at the town's gazebo. Rockwell officials are seeking information. 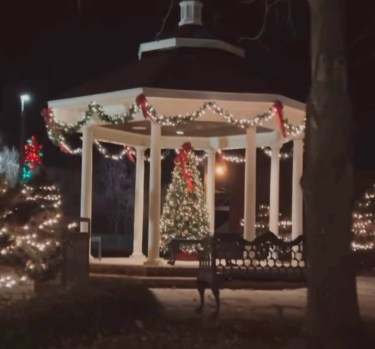 Rockwell Public Works Director Tim Linker indicated the town is reviewing video surveillance from Thursday night and Friday morning after the tree was taken from the gazebo. - Submitted

ROCKWELL — The Grinch visited Rockwell early this year. At some point Thursday night or Friday morning, someone took the town Christmas tree from its spot at the town’s gazebo.

“Somebody decided that they wanted a tree,” said Tim Linker, the Rockwell public works director.

According to Linker, the bottom part was left but about three-quarters of the tree was taken.

“We’re not sure when it happened,” Linker said. “We know it happened sometime (Thursday) night.”

After noticing the theft, the city put out an alert on its informational Facebook page to see if anyone had seen or knew anything.

“We don’t have any leads at this time,” Linker said. “We are currently looking at videos from businesses in the area.”

It’s the first time the tree has been damaged or taken from the gazebo location.

“We have never had an issue with that tree there,” Linker said.