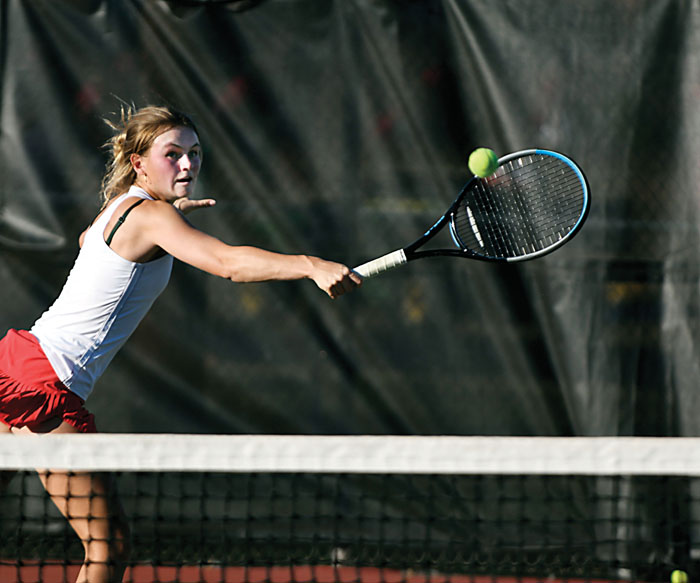 Salisbury junior Millie Wymbs has already won two Central Carolina Conference Player of the Year honors and will go for a three-peat next season. File photo by Wayne Hinshaw, for the Salisbury Post

SALISBURY— Salisbury tennis standout Millie Wymbs is an athlete with or without a racket in her hand.

Wymbs, who does good things running and swimming for the Hornets when she’s not on the court, is the Post’s Rowan County Tennis Player of the Year for the second time.

Wymbs — it rhymes with climbs, not limbs — shared the award last season with doubles partner Abby Campion after they led the Hornets to championships and made a run to the individual state semifinals.

Wymbs has been voted the Central Carolina Conference Player of the Year by the league’s coaches the last two seasons. Salisbury has produced several two-time CCC Players of the Year, but hasn’t had a three-peater since Hannah Lebowitz in 2007-09. Wymbs will likely accomplish the three-peat feat next fall.

“Millie is a special athlete, plays a lot of sports and has success in all of them because she puts her heart into whatever she does,” Salisbury tennis coach Milton Griffith said. “She doesn’t get down very often on the tennis court, but if she does get down, she’s going to fight you. She’s not going to give up. She’s a very competitive person.”

In the pool, Wymbs had a third and a sixth in individual events in last winter’s Central Carolina Conference Swimming Championships.

The junior is running indoor track now. The sport provides excellent cross training for tennis, and she’s also good at it.

Not a lot of tennis players can say they have stood on the podium at the state track and field meet for sprinting a leg on the 4×400 relay, but Wymbs helped the Hornets take third place last spring.

“I do enjoying running and it’s built my endurance up,” Wymbs said. “I like the track coaches at Salisbury. I enjoying being with my friends and I like to compete.”

Wymbs (18-1 in singles) led Salisbury to another terrific tennis season and its 20th straight CCC championship.

While the winning never changes for Salisbury tennis, the lineup does.  The wrinkle this year was that with Campion gone, Wymbs’ new doubles partner was her little sister, freshman Cora Wymbs.

It’s unusual to have the team’s No. 1 seed paired with the No.5 player for doubles, but the sisters have that sibling chemistry. They embraced the opportunity and formed one of the best doubles teams in 2A.

“It definitely was a little different this year, playing with my sister, but we made it work,” Wymbs said. “We had a lot of wins and got rewards for the work we put in.”

The sisters were CCC champions and runners-up in the 2A Midwest Regional. They reached the semifinals of the state individual tournament to earn All-State recognition.

After an unblemished regular season, Salisbury was the No. 1 seed for the 2A dual team state playoffs and came close to knocking off perennial state champ Hendersonville. Salisbury lost 5-4 to Hendersonville in the regional final.

“I knew we had a deeper team this year than we had in 2021,” Griffith said. “We had two really good seniors (Abbey Lawson and Kate Burton played No. 2 and No. 3) and I thought we had a chance to make a run. Then when I saw  the players at the individual state tournament, I knew we had a shot at a state championship. And we were right there. We had our chance.”

Wymbs got started in tennis early. Her father plays regularly and he started taking her out to the courts with him.

“I got pretty serious and competitive with tennis when I was playing for Salisbury Academy,” Wymbs said. “What I really liked about the sport was that even if you lose a point, you get to play the next one right away. You don’t have to sit around and wait and think about it, you move right on to the next one.”

Wymbs, whose favorite subject is math, said she’s frequently asked about her future. People want to know if she aspires to continue with a college tennis career or will she focus on academics.

She hasn’t decided yet. She’s got some time. That’s a bridge she won’t have to cross for another year.

As far as goals for her senior tennis season, she’s not looking to put any sort of pressure on herself or her team.

“I just enjoy sports,” she said. “All I want to do is keep having fun with it.”

The Cougars had a deep team and went 13-3. Two losses were in the South Piedmont Conference to 3A runner-up Lake Norman Charter, while the only other setback came in the second round of the 3A playoffs.

Twelve Rowan girls, including six Hornets and four Cougars, were regional qualifiers for singles or doubles.