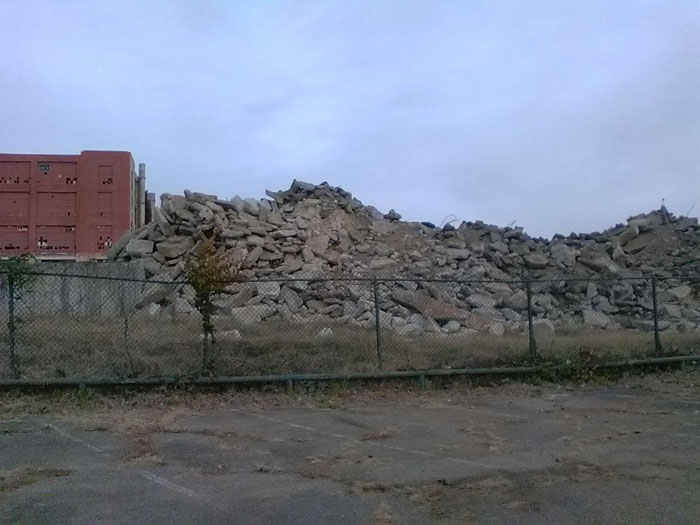 An old textile mill is being cleared to make way for the building of a casino. Submitted photo

There’s a site not far from me where an old textile mill is being cleared to make way for the building of a casino. Much of it is being accomplished with the “mace-like” action of a wrecking ball swung on a chain. You might say there’s been “A whole lotta’ crushin’ goin’ on”(my paraphrase, and my apologies to the late Jerry Lee Lewis). Since I heard that a full-fledged gravel operation was being carried out there from the remains of the old mill’s “corpse,” I had to go see for myself( I’ve always liked rocks, even when they’re the man-made ones ).
So, I set out toward the site in my old Alero. Anytime you get behind the wheel of a high-mileage, 2000 Alero, the phrase “setting out” is not overblown! It’s kind of like when Captain Bligh and his few faithful officers were set adrift in a row boat by Fletcher Christian and his fellow mutineers of the H.M.S. Bounty.
Approaching the area of destruction/construction, I saw three great “pyramidal” piles of gravel! They had been made from the crushing of walls and old concrete surfaces where the mill’s employees had once parked their cars, and where trucks had once been parked to be loaded with the mill’s wares. I also saw the great crushing machines by which this “machination” had been achieved. The gravel is to be used in part of the area’s re-purposing.
By chance (and only by chance, I’m sure) those three great pyramidal piles are oriented towards each other in the same fashion as the three pyramids of Egypt’s Giza Plateau and the three bright stars in the belt of the constellation Orion. But like I said, it’s just by chance (no additional “In Search of” pyramid conspiracy than there is already).
Then, driving just a little further, I saw a huge pile of large blocks in readiness for those machines which would later be “Making little ones out of big ones “(old 1940’s prison movie lingo).
Those larger pieces of stone in that great pile reminded me of tombstones!
Yes, some of the concrete had initially been broken into large, rectangular, grave monument-size stones; but of course, they were blank, nothing was inscribed upon them.
In my mind, I imagined a name upon each of these yet, un-pulverized “markers,” along with a beginning and ending date.