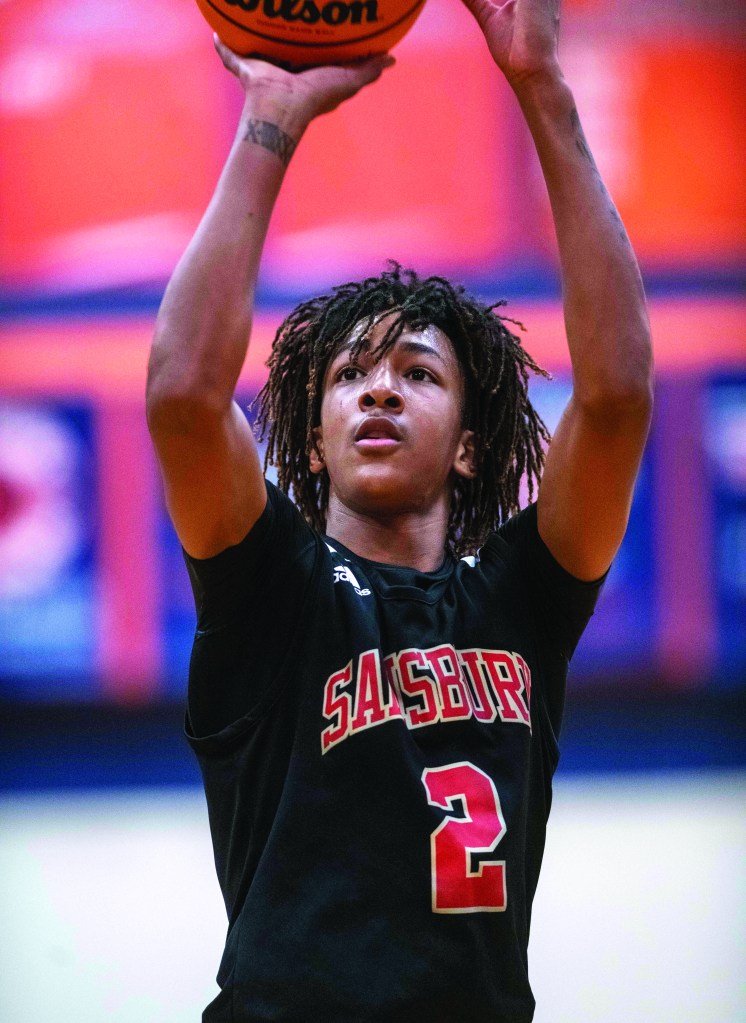 MARSHVILLE — Salisbury junior Jayden “Juke” Harris showed what all the hype was about on Friday.

The highly recruited, 6-foot-6 guard put up a jaw-dropping stat line in an 85-59 victory at Forest Hills. Harris careered with 40 points, 14 rebounds and five assists.

It was only the eighth time in program history that a player has reached or surpassed 40 points in a game. Shamari Spears, who accounted for five of those eight 40-plus games during the 2002-03 season, set the bar high for the SHS school record with a 55-point outing against East Davidson.

No one else scored in double figures for the Hornets (3-0), but no one else needed to. Deuce Walker scored eight in his season debut. Dashawn Brown also had eight, and Bryce Dalton had five points, five assists and four steals.

Salisbury will take on highly regarded Calvary Day this afternoon at about 4:30 p.m. at Forsyth County Day.

CRAMERTON — It was a forgettable Friday for the South Rowan boys basketball team.

“We couldn’t shoot tonight,” South coach Daniel Blevins said. “It was a standing on the beach and couldn’t hit the water night.”

South (1-3) had scored 77 and 64 in previous games this season, so the Raiders will hope this was an anomaly and move on.

Harris followed up his monumental 34-and-12 performance in a victory against North Rowan earlier this week with 30 points and 13 rebounds on Friday.

But this time the Mustangs didn’t prevail. They were outscored 82-68 by the Trinity Bulldogs.

East got 15 points from Dylan Valley and a season-high 11 from Garrett Lee.

Trinity (5-1, with three road wins) jumped out to a lead in the first quarter and held it, although the Mustangs (1-2) made some runs.

“Slow start, but we fought back and had Trinity’s lead down to six in the third quarter,” Porter said. “Never stopped fighting.”

It was a nine-point game with just under a minute left, but Trinity made free throws down the stretch.

DAVIDSON — Community School of Davidson didn’t make a field goal in the fourth quarter, but was able to h0ld off North Rowan on Friday.

Community School’s 2-3 zone defense, with 6-foot-7 freshman shot-blocker William Stevens in the middle, kept the Cavaliers out of the paint.

George Maxwell’s outside shooting from the wings gave the Cavaliers (2-2) a chance. Maxwell made seven 3-pointers, including five in a red-hot third quarter.

Maxwell scored a career-best 24, but his effort was off-set by Community School of Davidson star Seth Johnson, who had a huge first half and finished with 25 points.

Stevens had several dunks and scored 16 for the winners.

Community School of Davidson got huge second quarters from Johnson and Connell Lowery and led 48-27 at halftime.

North trailed by 14 heading to the fourth quarter, but made it interesting, cutting the Spartans’lead to 10 with five minutes left.

Jerricho Charleston made a couple of 3-pointers and scored 13 for the Cavaliers.

Community School of Davidson (3-2) didn’t do much scoring down the stretch, but made a few free throws and was able to effectively play keep-away and milk the clock.

OLIN — North Iredell’s size was too much for West Rowan on Friday.

After the teams battled to the wire in Mount Ulla, North Iredell (3-1) put the rematch away early. The Raiders’ 6-foot-8 Beckham Tharpe had 14 points, six rebounds and six blocks — by halftime — and West was in a 39-19 hole.

North Iredell showed some depth and was brutally efficient on offense, shooting either layups or open 3-pointers. The Raiders put five men in double figures.

The Falcons (0-4) didn’t do a bad job of attacking the rim, especially Kayvone Norman, but they didn’t get many whistles.

Givens did what he usually does. He made five 3-pointers and scored 19 points. Norman, a physical point guard, scored a career-best 16.

West played for the second straight game without Athan Gill, but the Falcons scored 28 in the fourth quarter, almost matching their production for the first three.

North Iredell led by as many as 26 points, but West closed the game with an 11-1 run to make the final score respectable.

MARION — Rockwell Christian won 90-68 on Friday at New Manna Christian, the defending state champs in the 1A division of NCCSA.

Caden “CP” Perry, an 8th-grader who is the son of Carson boys coach Brian Perry, poured in 50 points for the Chargers (9-2).

Drew Neve, another 8th-grader, had a huge game for Rockwell Christian with 20 points and 20 rebounds.

Chasen Hall, a junior, added 12 points for the Chargers.