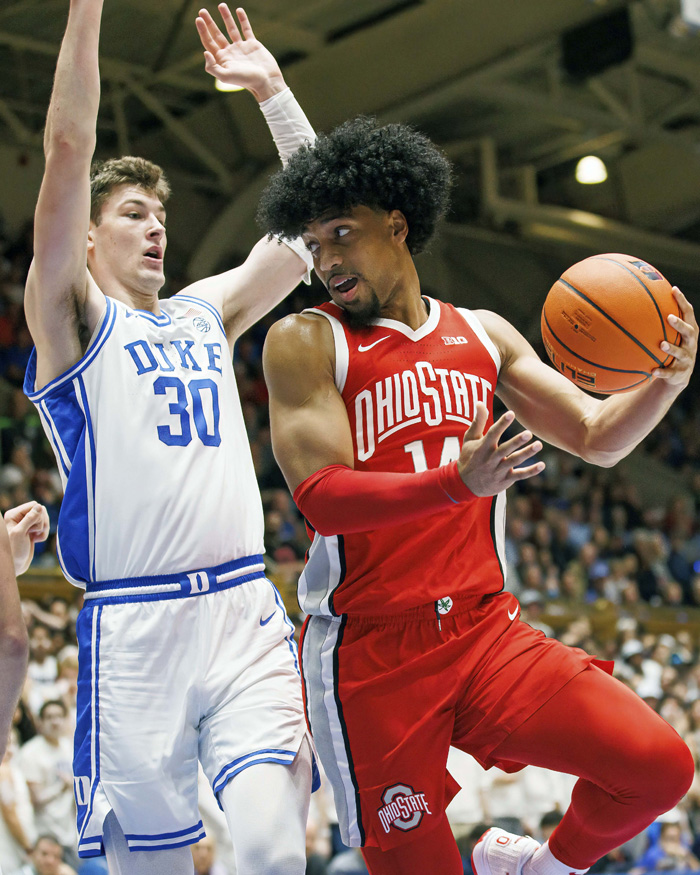 DURHAM —  Jon Scheyer knew it would take time for a Duke team with 11 new players to learn each other and how to close out games. Moments like Wednesday night — with the 17th-ranked Blue Devils tenaciously protecting a second-half lead against a ranked opponent— are vital for that process.

Freshman Kyle Filipowski had 16 points, including a key three-point play with 2:37 left, to help Duke beat No. 25 Ohio State 81-72 on Wednesday night in the final ACC/Big Ten Challenge, a solid bounceback performance after a loss to No. 5 Purdue.

Jeremy Roach added 13 points for the Blue Devils (7-2), who had a strong stretch late in the first half to take a 10-point lead into the break. Duke tenaciously held its lead even as the Buckeyes (5-2) repeatedly made multiple pushes to climb closer.

“I thought it was the best we managed the game,” Scheyer said. “We were playing games, and now we’re learning how to win games. … And in those moments they make a little bit of a run, we had to really execute and work it on the offensive end.”

Ohio State trailed by 13 early in the second half but cut it to six eight times and as close as five thrice, the last time coming when Sean McNeil buried a 3-pointer from the left wing with 3:06 left to cut the deficit to 72-67.

But the 7-foot Filipowski, part of the Blue Devils’ No. 1-ranked recruiting class for Scheyer’s debut season as coach, had an immediate answer. He went on the attack for a spinning basket through contact from Justice Sueing, and his ensuing free throw pushed that margin back to eight.

The Buckeyes got no closer than six again.

Ohio State’s Zed Key posted his second straight big game against Duke. After finishing with 20 points in last year’s home win against the then-No. 1 Blue Devils, he had 17 of his 21 points after halftime in this one to go with eight rebounds on a night when the Buckeyes battled foul trouble.

The Buckeyes had a rough final 9 minutes of the first half, managing just two baskets in the final 8:38 while committing seven turnovers. That helped Duke gradually stretch out a lead, including 18 points off turnovers to take the 39-29 halftime lead.

But Duke managed just two points off those miscues after halftime as Ohio State pushed back.

“I just did not think our decision-making was what it needed to be,” Ohio State coach Chris Holtmann said. “We had some turnovers really across the board: post-play turnovers, we had some turnovers from some of our young kids. Obviously it’s something we’ve got to clean up.”

Both of the Blue Devils’ losses this season have come against power-conference opponents, first against No. 9 Kansas in the Champions Classic and last weekend’s loss to the Boilermakers in the title game of the Phil Knight Legacy tournament.