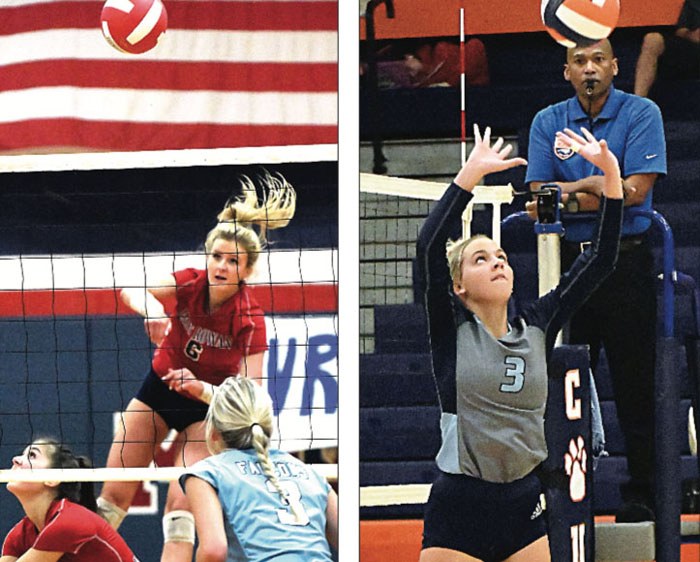 SALISBURY POST file photo — East’s Leah Hinceman’s 444 kills put her over the 1,000 career mark while Ashlee Ennis (3) was the best player on the best team, West.

GRANITE QUARRY — East Rowan volleyball coach Sandy Lytton left the South Piedmont Conference all-conference meeting with a lump in her throat, tears in her eyes and a smile the size of Texas.

Leah Hinceman, a talented 6-foot-1 senior who has signed with Lenoir-Rhyne, was responsible for the lump, the tears and the grin. She had been voted South Piedmont Conference Player of the Year by the league’s coaches after leading the Mustangs to a runner-up finish.

“I felt like jumping up and down when I left that room,” Lytton said. “For East Rowan to get conference player of the year is a huge thing for our program. It’s a dream and a goal I’ve had for Leah, something that I wanted for her because she has worked so hard. I had no doubt in my mind she was the best all-round player in the conference and in the county. Player of the year is not something that we talked about because Leah didn’t need to have the pressure of going out there and trying to be a player of the year. She had enough on her shoulders already. We asked a lot of her.”

Hinceman’s numbers were outstanding. They were headlined by a 444-kill season and a 1,000-kill career, despite COVID.

Raw kills total don’t always tell an accurate story of a player’s value because if you’re getting 13 kills while making 15 hitting errors, you’re not helping the team. But Hinceman had solid numbers, a 43.1 kill percentage, which meant she was putting it down almost half the time, and a .287 hitting percentage (that’s total kills minus total errors divided by total attacks), which meant she was not only getting serious kills, she was limiting the number of free points she was handing opponents by hitting low or long or wide.

Both of those percentages were significantly improved over her junior season.

“And there’s the digs (279), the service aces (45), the blocks and the great job she did for us in serve-receive,” Lytton said. “There’s no aspect of volleyball she doesn’t excel at. Great hitter, great competitor, great skills, great athletic ability. The kills for Leah this year came faster than they ever have and she was hitting the ball harder than she ever has.”

She’s got all the respect in the world for Hinceman, but West had just run the table in the South Piedmont Conference for the second straight season, and in Dowling’s view of the world, it’s about winning, and West had won and won and won.

When it comes to volleyball, the SPC is centered around Lake Norman Charter and the four Rowan schools and West hasn’t lost to any Rowan school since 2018.

SPC coaches had expected Dowling to nominate junior Emma Clarke for SPC Player of the Year because Emma Clarke is Emma Clarke, and there were some nights when she took over matches as a hitter and was devastating.

But Dowling had brought Clarke along slowly during the season, playing her only three rotations and giving her all the time she needed to make a decision on her softball college commitment. Once Clarke, rated as one of the best softball players nationally in the Class of 2024, settled on Tennessee as her future home, Dowling ramped up her volleyball duties, but the key to the Falcons’ success all season was senior Ashlee Ennis, who was setting for the first time.

“That wasn’t a hard decision,” Dowling said. “Ashlee didn’t really want to set,  but I asked her prior to the season if she wanted us to be as good as we could be. She said she did, so I told her, ‘OK, that’s settled. You’re the setter.’ Ashlee had some club experience setting, but it was the first time she’d set for West Rowan. She was phenomenal at it, great hands, great decision-making, great leadership, great intensity, but great calmness  talking to officials. I’ve coached volleyball 27 seasons, and she’s the first girl I’ve ever coached whose been a defensive specialist, a libero, an outside hitter and a setter. And she didn’t just play all those positions, she excelled at all of those positions. We had different girls step up for us on different nights this year, but Ashlee was the one girl who brought it every single match. She brought it every single point. She was the glue to everything we did. We don’t win then number of matches we won without her being really good.”

Lytton and Dowling are friends and colleagues. Both have poured heart and soul into volleyball over the years and have done more than their share to make it one of the county’s strongest sports. Both presented compelling arguments for their candidate.

Co-winners are fine with Hinceman and Ennis, who played club ball together long ago when they were getting started in the sport. They became competitors for rival programs in high school, but their friendship has survived.

They are “frenemies.” They battle during the matches, but they hug when it’s over.

Hinceman got started in volleyball thanks to East libero Riley Hill, a recent Catawba signee.

“It was  Riley  who got me into it,” Hinceman said. “Riley was playing volleyball, and she loved it, and she told me I needed to try it. Riley was tiny, and I was huge. I figured if she could to it, I could do it.”

Hinceman was a strong basketball player growing up and stood out as a freshman at East. But she made a decision between her freshman and sophomore years that volleyball was where her heart was. She decided to go all-in.

“I remember the specific night,” Hinceman said. “I was sitting watching a volleyball game and I realized I would give anything to be playing in it. I told my parents in the car that night that I wanted to start doing everything I could do to be a good volleyball player.  I knew the feeling that I got when I was playing volleyball, and it was better than anything else. I felt very lucky that I realized early on what I wanted to do as far as athletics, and my parents always supported my decision.”

She would make transitions, shifting club teams and changing positions on the court from the middle to the outside.

“Those switches were challenging,” Hinceman said. “To move from a club where you’re playing with your friends to a bigger club where you don’t know a soul is hard. And it seems like you always get perfect sets in the middle, but on the outside you get all kinds of balls. You still have the job of getting it down and getting it in.”

East began Hinceman’s senior season with nine straight wins. Then East lost to South Rowan, but that turned out to be an important night.

“Riley and I were determined that we weren’t going to take a step back, that we weren’t going to put our heads down after one loss,” Hinceman said. “We were determined to keep right on winning. We had a great season as a team, and I cherished every minute I got to play with Riley.  We finished second in a good league. We won 20 matches. We got to play a playoff game in front of our home fans and we won it. That was an incredible feeling.”

At Lenoir-Rhyne, which is coached by former South Rowan star Nicole Barringer, Hinceman found her next home.

“I bonded with Coach Barringer over a lot of similar experiences that we shared,” Hinceman said. “I loved the energy at L-R and loved the family atmosphere.”

Ennis is an exceptional student who may follow her older sister, Allison, a former West Rowan setter, to UNC, but she hasn’t closed the door on playing college volleyball at a smaller school.

“I hadn’t really expected to have the kind of senior season that I did,” Ennis said. “I love volleyball so much, I’d hate to give it up. I’m still playing club ball and keeping my options open.”

Because she had an older sister who played club volleyball, Ashlee got started early. As a 9-year-old, she was playing with and against 12-year-olds.

Softball and volleyball were neck-and-neck for Ennis for a while, but as was the case with Hinceman, volleyball won the race.

“I like softball, but I realized a few years ago that I loved volleyball more and knew that volleyball was my thing,” Ennis said.

She’s made the journey from being Allison’s kid sister to being one of the county’s best athletes. She’s also taken the ride from  freshman defensive specialist to sophomore libero (when Brooke Kennerly was injured) to junior outside hitter, a position where she was all-county despite being 5-foot-5.

Then as a senior, she accepted the all-important setting duties.

“We’d lost so much experience from last year and didn’t have a true setter,” Ennis said. “I was willing to do it for us to be a successful team, and I came to love it. As the setter, you feel like the quarterback and you’ve got a lot of control over what happens. We didn’t have that go-to hitter this year, but when Emma Clarke was on, I’d look for her, and when one of the other girls was on, I’d find them. Everyone worked together and we won. It was super-exciting to keep the winning going.”

Ennis was proud to make the all-region team and was proud to go undefeated in county games for her four-year varsity career. That was an accomplishment. South, East and Carson had excellent teams.

“The county was always so important to us,” Ennis said. “We stayed on top, and I think it’s even harder to stay on top than it is to get there.”