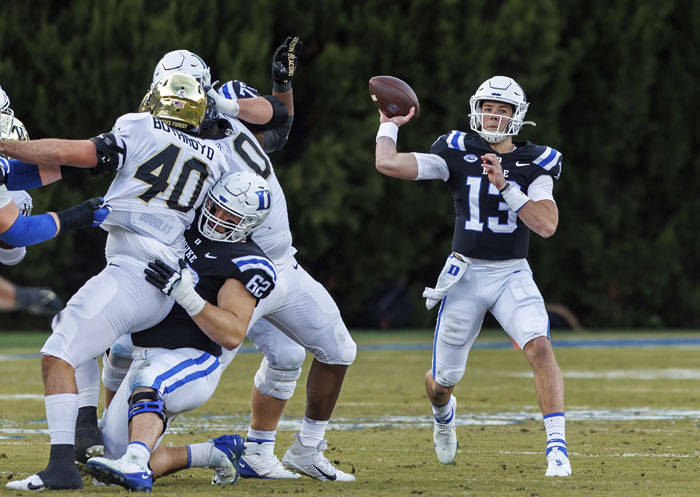 DURHAM  — Riley Leonard threw for a career-best 391 yards and four touchdowns and Duke used a late touchdown to close out the regular season with a 34-31 victory over Wake Forest on Saturday.

Leonard, who completed 29-of-41 passes, connected with Sahmir Hagans for the game-winning score, a 20-yard reception with just over two minutes remaining in the fourth quarter.

Hagans finished with two touchdowns and set career-highs in receptions and receiving yards, as did Duke’s Jalon Calhoun. As a duo, Hagans and Calhoun accounted for 19 receptions and 313 receiving yards. With the win, the Blue Devils (8-4, 5-3 ACC) snapped a three-game losing streak in their series with the Demon Deacons and recorded their first eight-win regular season since 2014.

“I think we put down a marker about how long it’s going to take for Duke football to get competitive,” said first-year Duke coach Mike Elko, who inherited a program that went 5-18 in 2020 and 2021.

Wake Forest (7-5, 3-5) quarterback Sam Hartman completed 26-of-42 passes for 347 yards and three touchdowns but was intercepted late in the fourth by Duke defensive back Darius Joiner. Demon Deacon wide receiver A.T. Perry had eight catches for 87 yards and a score in the loss.

Wake Forest: In late October, the Demon Deacons were 6-1 and ranked 10th nationally. Coach Dave Clawson’s team then lost four of its final five regular-season contests, and defense was once again a big issue for Wake Forest on Saturday. Wake Forest now has given up 30-plus points in four straight games, and Duke had multiple offensive playmakers with career days. The Demon Deacons surrendered five plays of at least 20 yards, including Duke’s game-winning score.

“We had a chance on defense to get a stop, and it’s been our Achilles’ heel all year — our inability to defend the deep ball,” Clawson said. “We’ve struggled all year defending the deep ball and a disappointing way to end the season.

Duke: The Blue Devils closed out first-year coach Elko’s first regular season in grand fashion. Punctuated by Leonard and Hagan’s big days, Duke once again illustrated their impressive turnaround after going 3-9 last year and showed that there’s a lot of young talent around for the years to come as well.

Few people expected Elko’s first regular season coaching the Blue Devils ending with him tying the program record for most wins by a first-year coach. Yet, Elko and his staff have found a way to take an offense and defense that ranked 102nd and 127th in scoring last year, respectively, and vastly improve both groups.

“The thing that stands out the most to me is we go into every game expecting to win,” Leonard said. “And trusting that if we do our job, we’re going to win. I know that in years past, some guys predetermined things in their heads, but this year, there was not one game that we went into thinking we were going to lose.”

Even in defeat, Duke has been competitive, with each of its four losses coming by a score or less.

Added Calhoun, a senior who had career-bests in catches (11) and receiving yards (174): “We always knew we could be special. It was just putting the right pieces together and getting the culture back where it needed to be.”

Both Wake Forest and Duke await bowl invitations. Wake Forest has played in a bowl every season since 2016, and Duke is bowl eligible for the first time since 2018.