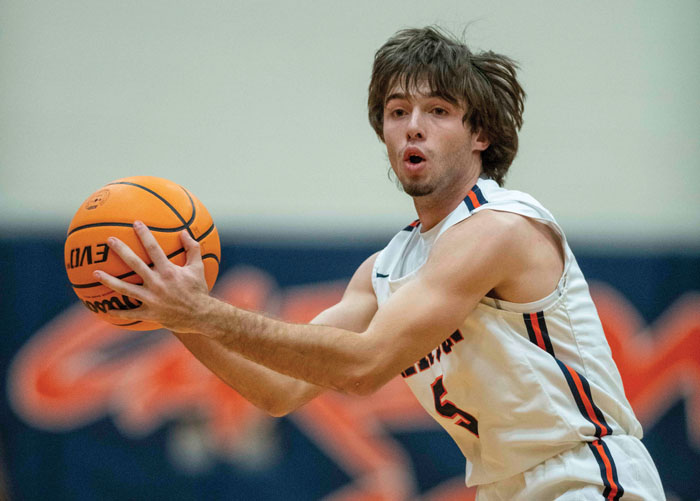 Emory Taylor is one of Carson's seniors this season. File photo by JON C LAKEY / FOR THE SALISBURY POST. 11/30/21, China Grove,NC.

Eighth in a series of reports on local basketball teams …

CHINA GROVE — Like Brooke Stouder on the girls side of things at the school, Brian Perry has coached Carson’s boys basketball team since the program’s first day.

His 400th game at the helm was the final game of the 2021-22 season, and it’s been a pretty solid run. Carson has won 47 percent of the time, and if you throw out those first two seasons when Carson didn’t have a realistic chance to field a winning team, the Cougars have won 51 percent. They’ve been respectable — and then some.

The Cougars peaked with a 26-3 season in 2017-18. They may never get back to that level — that special team started three future college basketball players and a second-round MLB draft pick — but they do have a chance for a winning season in 2022-23.

Carson won’t be as quick or as tall as many opponents and they won’t rule the South Piedmont Conference, but a winning record, finishing in the top half of the SPC and making the state playoffs are realistic goals.

“We’ve got some seniors, some good players who have been in the program for four years,” Perry said. “We’ve had a couple of tough seasons, but we’re hoping to flip that switch and get back to getting more wins. We finished last season on a very positive note with three county wins (including one against West Rowan) down the stretch. Hopefully, that carries over.”

Carson’s basketball program is built around multi-sport athletes. Perry is counting on three seniors who will be next-level baseball players — Cameron Burleyson, Emory Taylor and Mikey Beasley. Carson also will rely on BJ (formerly Jay) Howard and Jay McGruder, who, along with Taylor, were key members of the football team.

Carson added Colin Ball to the hoops crew last season. After a slow start, Ball adjusted to the speed of varsity basketball and turned in an impressive freshman season. He’s a rarity for the Cougars, a year-round basketball guy.

While none of the balanced Cougars is likely to put up eye-popping individual numbers, Burleyson, Taylor and Howard all have been honored as all-county or all-conference, and that’s a significant achievement. Ball should have plenty of all-county and all-conference honors in his future.

Carson will miss the toughness, rebounds and paint defense that Hunter Burris and Garrison Collins contributed last season, but the scoring punch for the Cougars returns intact.

The trick, as Perry has talked about many times, is getting three of the five hot on a given night. Carson would like to score in the high 60s or 70s, but sometimes it’s been tough to get out of the 50s.

Taylor is quick, fast and a strong jumper. He’s been playing out of position at point guard because Carson needed him to handle the ball, but the plan is for sophomore Jonah Drye to take over most of the ball-handling responsibilities this season.

Drye’s emergence should free up Taylor to shoot more and score more. He has started this season in an offensive slump, as he works to get his basketball legs back after an outstanding football season, but he’ll heat up.

Beasley is a smooth lefty shooter. He can stroke it, especially from the corners.

Howard is a fast, bouncy athlete, who can score on stick-backs or shoot with range.

Ball has the most pure basketball skills of anyone on the roster and can mix jumpers with drives.

“He was playing as well as anyone we had at the end of last season,” Perry said. “And he’s gotten stronger.”

Burleyson, a baseball catcher headed to Catawba, brings leadership qualities, shoots well and may be the team’s best defender. After missing a full year of athletics with elbow surgery, he made quite an impact last season.

McGruder is going to be an important addition and will play a lot. The football running back will be asked to do what Burris did, to bang and rebound against taller players.

McBride is a wide, strong all-conference lineman who had quite a football season. He’s not expected to score a lot, but he gives the Cougars inside presence, bulk and muscle.

Hales is a guard who can handle the ball and make 3-pointers.

Guida didn’t play a lot a year ago, but he could make a surge. A football receiver, he’s one of the team’s better athletes.

“He’s matured a lot and he’s been playing headier than he did last season,” Perry said.

DJ Williams is a newcomer to the varsity. He’ll be an energy guy for the Cougars.

Carson began this season with a loss at Mount Pleasant and a low-scoring victory at A.L. Brown.