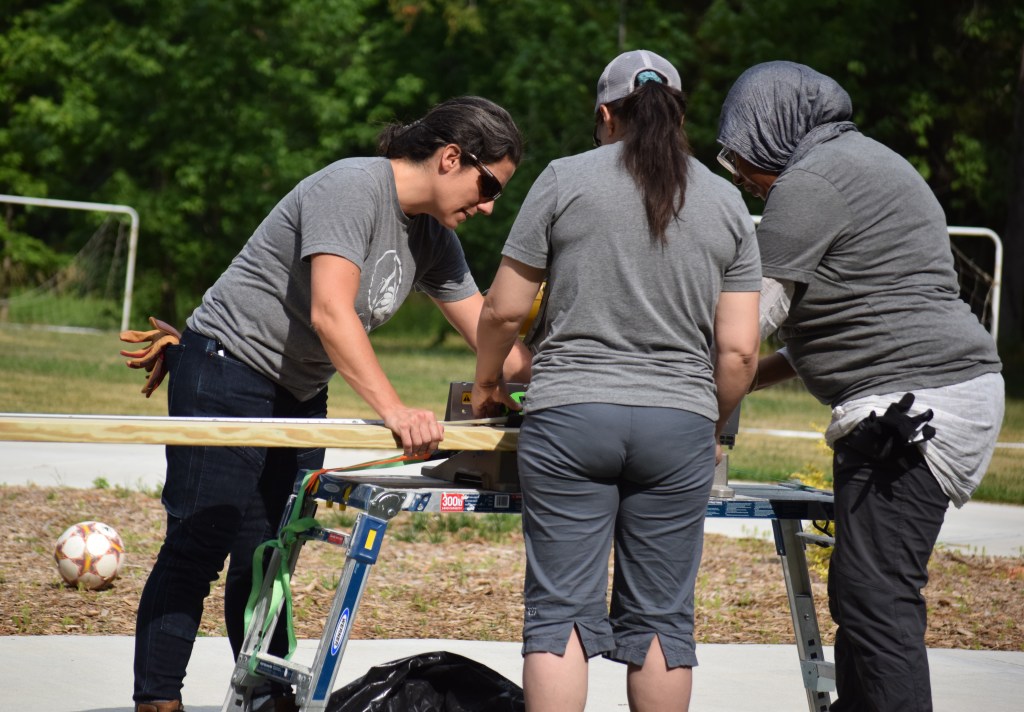 Spencer and her team work on a construction project.

Nora El-Khouri Spencer is on a mission.

Since 2020, the Salisbury native has been traveling around North Carolina and speaking on national television to help those in need, while also guiding women toward a new life and career. Spencer is the founder of Hope Renovations, a non-profit based in Carrboro that trains and employs only women to work in the construction industry.

Spencer began her career in corporate human resources and recruiting where she ended up working at Lowe’s corporate headquarters in Mooresville. She and her husband had just bought their first home and they realized it still needed some work. They took on a bathroom renovation that was more of a headache than they imagined and, once it was complete, she had a realization.

“For the money that we spent I wasn’t happy with how it turned out and I just kind of thought, I think if I figured out how to do this I could do as good or a better job and for less money,” Spencer said. “I started taking advantage of that Lowe’s employee discount, buying tools, and over time I learned how to do stuff.”

Construction became a cathartic skill for Spencer as she developed her expertise in the field.

“Being able to create something or being able to fix something and know that you accomplished it yourself, that you did it independently, that you didn’t need to rely on anybody else to do it. It’s a great feeling. I always say there’s not much that’s more confidence boosting than running power tools,” Spencer confessed.

Over time, she learned all different kinds of skills, like how to patch drywall, how to frame walls, pull wire and install plumbing. It soon became a passion of hers. A couple of years after getting into construction, Spencer realized she never came across any other women who did the same kind of work, and she constantly heard from women that were interested in that line of work, they just didn’t feel like they had any opportunities to break into the male-dominated profession.

With an idea beginning to form, she left her job at IBM and returned to her undergraduate alma mater, UNC Chapel Hill, to get a master’s degree in social work.

“I had this idea for a training program for women to get them into these opportunities. It was sort of half baked I guess. Then my experiences in the school of social work and some of my internships kind of drilled home the need for women, particularly underserved women and women from disadvantaged communities, to be able to access these jobs because they pay great money and they can really help you lift yourself out of poverty and support your family,” Spencer said.

After doing some research, Spencer couldn’t find an organization that did this in the entire state of North Carolina. She was taking a business class where they discussed aging in place, where senior citizens can still live in their own home as they age and not have to be moved to a retirement facility.

“It literally was a lightbulb moment. It hit me that if I am training women for these opportunities, they’re going to need some hands-on experience. This is a whole sector of the population that needs this help, there’s not enough contractors doing it, why don’t we bring those two things together. That’s how Hope Renovations came about,” Spencer explained.

Spencer started working on the organization after graduate school in 2017 and it officially launched in 2020. By the end of 2022, they will have completed 175 projects that range from installing grab bars to bathroom and kitchen renovations. By end of the year, 60 people will have graduated from the program.

All of this success was not something her father, George El-Khouri, expected. He thought Spencer would go into acting after seeing her perform in “The Miracle Worker” when she was younger.

“To be honest with you, yes I am surprised, but I knew whatever she got in to she would do well,” El-Khouri said.

Growing up, she would help George with fixing things around the house like a broken fence. Now, the roles have been reversed.

“She helps me all the time. Whenever there’s something I do not understand or don’t know about and she visits Salisbury, she will take the time, whether it’s a dishwasher or the hamper or the screen door, whatever it is. Not just inside the house, but also outside the house,” El-Khouri said.

Starting a new business venture in 2020 as COVID was beginning Hope Renovations had hurdles to jump. Still, it wasn’t anything the organization couldn’t handle. They bought masks, hand sanitizer, practiced social distancing and “ripped the band aid off” by starting both training and construction programs in the summer of 2020.

“In a weird way, the pandemic was actually beneficial to us as a start-up organization because so many women were becoming unemployed, then later ‘The Great Resignation’ starting happening. So, a lot of women were looking at their careers and deciding ‘I want to do something different,'” Spencer said. The term ‘great resignation’ is a reference to a perceived higher-than-normal number of employees voluntarily resigning in 2020 and 2021, though data has shown the trend started more than 10 years ago.

One top of that, during the pandemic, the construction industry was an essential industry, so the demand for workers were at an all-time high. “It feels a little weird to say it, but COVID was a bit of a silver lining for us getting started because the needs became so great and we could fill those needs,” Spencer added.

Over the next few months, Hope Renovations will be changing their business model slightly. Many women can’t access their program because it’s during the day on weekdays, when many are working to support their families. Next year, women in the program will receive a living stipend of $300 a week to make the transition easier. Spencer says she plans to hire trainees as interns on her construction crew, where they will receive six weeks of valuable experience.

“We’re actually already looking at expansion. So we expect to have our first expansion opportunity by end of 2023 or early 2024. I would love to see Hope Renovations all over the country, that’s my long-term goal that in 10 years we’re in a lot of different places. These are needs that are all over the country,” Spencer said.

Spencer says about half of the women that join come from referrals from other community organizations and the other half find out by social media, word of mouth, or a simple Google search. She elaborated that Hope Renovations’ focus is helping people age 55 and up who want to age in place or adults with disabilities, but they also have done a commercial renovation for a chamber of commerce for their bathrooms, a multifamily housing project at a retirement community and have done work on a tiny house.

Hope Renovations acts as a non-profit, however, Spencer clarified that “Non-profit doesn’t mean no profit, it just means you can’t have shareholders.” Spencer goes on to clarify just how Hope Renovation generates and disburses revenue.

“Everything is on a sliding scale. So what that means is that folks who are on the top end of the income scale pay market prices for our work, and then the revenue that we generate from that work we put back into the work that we do for folks who are on the lower end of the scale to subsidize their costs so that they either pay very little for their renovations or sometimes it’s free, depending on other funds they were able to access.”

Besides relying on a sliding scale, there is funding that comes from the government that can sometimes come with many logistical issues.

“There’s government funding that we can access for some stuff. Town funding or county funding or sometimes state funding. The problem with all of the government funding is that there’s a lot of red tape wrapped around it, and sometimes you have to wait a long time for it to come through. If you have a floor that has caved in, waiting for six months is not an option,” Spencer said. “That’s why we really rely on that sliding scale model to generate revenue so we can quickly take care of those truly urgent jobs.”

Recently, Spencer has been named one of CNN’s Top 10 CNN Heroes of 2022 and has been on “The Drew Barrymore Show” to get Hope Renovation’s message out to the rest of the country. Rest assured that Drew Barrymore is a fan of Spencer and vice versa.

“She’s exactly how she seems. She’s bubbly, as sweet as can be, a big hugger and she’s the nicest person. I thought she was great, she’s so excited about what we’re doing at Hope Renovations, it was such a cool experience,” Spencer said.

Spencer doesn’t get to do much hands-on work anymore because of her busy schedule, and she does miss it.

“I like swinging the hammer and I like running the tools. I rarely get to go on the job site anymore with my team because we’re growing and my job is to run the organization and fundraise, but when I do, I love it when they put me to work.”

Spencer continues to work for women who need an opportunity at a fresh start and just need to know where to begin.

“For women, we have a different lens when it comes to the build environment. Home means something very different to us. Being a part of an industry where you get to build that for people is very fulfilling and very rewarding. That’s what we’re missing out on as women because we really never had a seat at the table,” Spencer said.

With people like Spencer in the world, that table is getting a whole lot bigger. 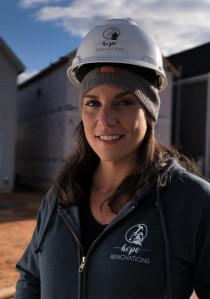 Spencer says her favorite construction activity is electrical because it’s like a “puzzle” to solve. 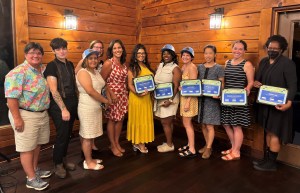 Spencer and a group of women who joined Hope Renovations to learn a new trade and career. 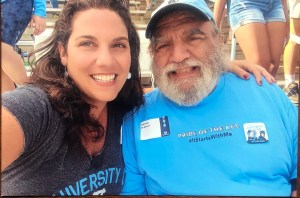 Spencer and her father are both big Tar Heel fans.