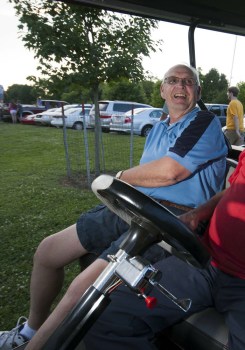 JON C. LAKEY / SALISBURY POST Jim Solomon (right) and his long time friend Ronnie Overcash sit in Solomon's souped up golf cart and make sure that no problems arise during games. Solomon has been involved with youth baseball in China Grove for 40 years. During baseball season Solomon and his waif, Tamara come to the youth baseball fields on the North side of town four days a week. Tamara runs the scoreboard and is the scorekeeper for the senior division teams.

Ronnie Overcash is seen standing at back row and his son Micah is at left on front row. Submitted photo

CHINA GROVE — If you’ve ever played baseball or softball at the China Grove Little League fields, you’ll see a familiar face at the start of this year’s Southern Rowan Christmas Parade.

He was nominated because of all of his hard work with China Grove youth sports by former events coordinator Patti Price.

Overcash became vice president of the league in 1992, when it expanded to ages 4-6 coach pitch teams and ages 7-8 machine pitch teams. Girls’ softball was added in 2003.

“We expanded according to need,” Overcash notes.

He became league president in 2016.

“We had three good years, and then COVID came along,” he says. “That was the worst year I’ve ever lived through. There was no sports and no church. It was awful.”

Overcash is a lifelong member of St. Mark’s Lutheran Church, where he’s held a variety of roles over the years.

This year, the league offered spring ball from April to June, with 350 players, then fall ball from September to the end of October, with 295 players.

The commissioners serve over each age group and serve on the board. They’re all volunteers.

Deal played ball as a kid, and his team played against the team Overcash coached.

“It’s like working with my dad,” Deal says. “Ronnie is organized, and he thinks ahead on everything. He communicates well. He’s brought good life skills to a lot of kids. We’ve been around a long time and we’re still going strong, and it’s because of people like Ronnie.”

“Someone took time and effort when my children were growing up,” Overcash says. “I feel like it’s a calling from God. It’s something I can do to give back to China Grove.”

Overcash gives credit to the town for success in youth sports. Additionally, the China Grove Civitan Club donates half of its concession sales to the league.

“It helps us keep costs lower so families can afford to play,” he says. “We don’t turn anybody away.”

Families who come to the China Grove ball fields can count on a family environment.

“We have a policy that parents and coaches can be banned for a season if there’s any bad behavior,” Overcash says. “In this day and time, you have to be a little strict.”

Deal, who’s police chief, says that he encourages officers to come during games and interact with children, so there’s always a positive police presence there.

“The biggest part of my summers were spent with my grandparents in Landis working in the garden,” he says.

His father, Richard, served as China Grove police chief from 1962 to 1984. His mother, Margaret, worked at Cannon Mills in Kannapolis. Overcash served two four-year terms on the China Grove Town Board. He’s retired from Food Lion after 43 years in the distribution center.

His sisters, Linda Hampton and Rita Akers, will likely be sitting at St. Mark’s when their brother passes by on the parade route.

“Linda said she’d be there with bells on,” Overcash says. “She’s more excited than I am.”

It will be a family affair for Overcash. His daughter, Rhonda Martin, will drive him, and granddaughter Taylor will ride with him and help throw out candy.

When he’s not at the ball fields, he’s usually playing golf. His favorite course is Pudding Ridge in Mocksville.

The 2022 Southern Rowan Christmas Parade (44th annual) on Nov. 22 in China Grove and Landis. Here is the lineup:

37. Rowan County Board of Commissioners

66. Boogerwoods for the cure of Cystic Fibrosis

117. The Forum of Salisbury