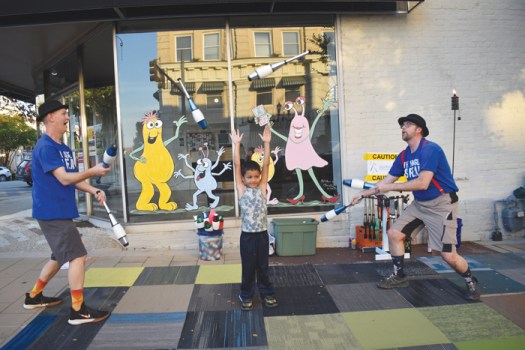 Six-year-old Benjamin Carter Brown willingly agreed to allow two jugglers at Friday's Busker's Bash to toss their pins around him, trusting they would miss him - and they did. Photo by Elisabeth Strillacci 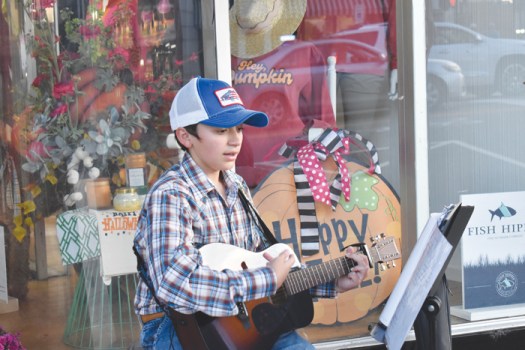 Adam Swanson, 12, has skills on multiple instruments, the acoustic guitar the most recent. He enjoyed sharing his musical talents Friday, despite having to compete with a microphone next door. Photo by Elisabeth Strillacci 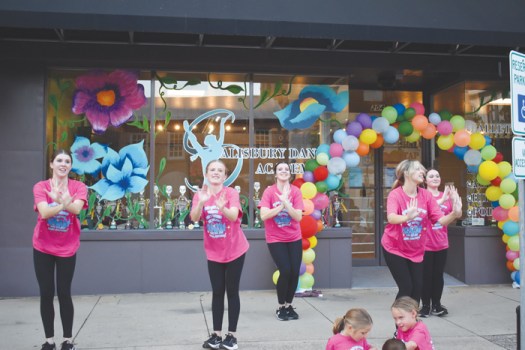 Both those performing and those watching noted the weather was perfect — cool but not cold, with clear skies and a slight breeze — for keeping dancers, singers, magicians and even jugglers from getting uncomfortable during the evening’s gig.

Performers were spaced along North and South Main Street, East and West Innes Street and the corner of Council Street from 5-8:30 p.m.

Attendees were given maps of all performers and small sacks with five special Busker’s Bash guitar picks. They could then put picks in the designated buckets of their favorite performers, and at the end of the night, winners of the event would be determined by the most picks or votes. (As of press time, the Post had not received notification of winners, which will be posted in a follow-up.)

Busker essentially means anyone who performs in a public place, and for 12-year-old Adam Swanson, it was a chance to show off his plentiful musical talents. On Friday night, he played acoustic guitar and sang, but that was his most recent instrument. He also plays numerous others, including the ukulele and the saxophone.

For audience member Benjamin Carter Brown, 6, it meant overcoming some natural shyness to engage with a pair of jugglers, something his mother, Amanda Brown, said she was delighted to see.

“I have two other children here that are in a dance competition at the end of the night, but right now it’s just the tw0 of us,” she said, praising Carter for braving his own audience and getting involved. She said her family moved to Lexington from Utah because she was looking for a small town with a mixture of races where her children could feel at home.

“I like Lexington, but I’m more and more impressed with Salisbury,” she said.

The offerings included dance groups, at least one magician, thee jugglers, multiple singing acts from solo performers to trios and one quartet. There were at least six solo performers under the age of 15, and all were supported by adoring family and friends.

Stores stayed open late for the event and many offered discounts for the evening. Restaurants open for the night had lines out their doors.

Check back for the winners.