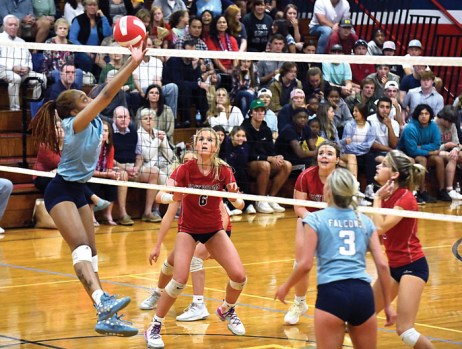 West's D'Ajua Cuthbertson (10) goes for the ball as East's Leah Hinceman (6) prepares to defend. photo by Wayne Hinshaw, for the Salisbury Post 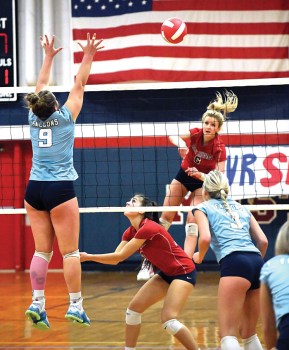 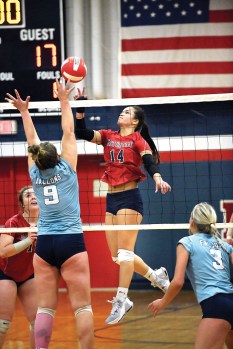 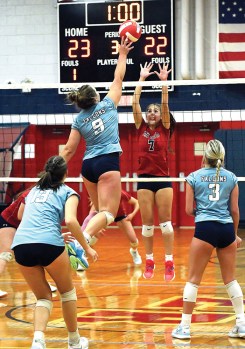 The Mustangs took their best shot and became the first Rowan school to take a set from West Rowan this season, but the Falcons, the South Piedmont Conference championships, were still standing at the end of a long night.

It was the 22nd county win in a row for the Falcons, who will take on Carson on Senior Night in Mount Ulla on Monday.

Mostly West won because of Emma Clarke, the softball star who is committed to Tennessee. She had 22 kills, four aces, three blocks and eight digs. 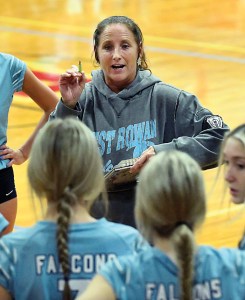 “This was kind of the match we’ve been waiting on from Emma,” West coach Jan Dowling said. “Tonight she became a volleyball player. She was confident, she was comfortable, and she just played amazing. Tonight, she didn’t over-think, she just played her game at a high level.”

A huge kill by Clarke sent East into a timeout down 8-3. The Mustangs were using their second one at 13-4.

East fought back as close as 16-12, but West setter Ashlee Ennis started going to Clarke over and over, and the Falcons won going away.

East won a tight second set, but the Falcons took the momentum back in the third one.

The Mustangs had a 10-8 lead in the fourth set, but West got a series of good plays from Sophia Blackledge to take over.

With West leading 24-15 after a powerful kill by Clarke, Hinceman ripped back-to-back-points for the Mustangs.

After a West timeout, Clarke recorded set and match point with an emphatic block.

Anna Grace Blackwell had 11 kills, three blocks and two aces for the Falcons. Madelyn VonCanon had 10 kills and nine digs. Ennis had 15 digs, four kills, a block and 30 assists.

An energetic Brooke Kennerly bounced around for 17 digs.

“East played very hard, and I thought we played pretty well,” Dowling said. “Sophia Blackledge gave us a big lift. She had some great swings, made some big blocks. It was a good team effort with a lot of girls contributing.”

NOTES: East won 2-1 in the jayvee matchup. … West will host the SPC tournament.