SALISBURY — The Rowan County Board of Commissioners approved a $165,000 lump sum request from Project Finishing, a manufacturing company looking at the city as a relocation site for the business.

Initially the county had approved $125,000 in a Level 1 Incentive Grant. Due to a mix up, the grant money was not included in the state budget, forcing the company and the county to try to find another way to provide those funds.

“It was our understanding from the company that getting the funds in a lump sum was a key component of their decision whether to relocate to North Carolina versus other states,” Scott Shelton, vice president of Rowan Partnership for Economic Development said. The money will now come from the county’s Economic Development Fund, which will be treated as a loan that will be forgiven if projected job creation goals are met.

“Instead of getting the incentive which would effect the general fund, this will actually come out of state funds and so actually I think it will be better for the county because we’re not going to give that incentive for the 10 years, it’ll just be over with with the lump sum for the money we get from the state, Commissioner Mike Caskey said.

“My understanding is a company executive has bought the company and is looking for a relocation site in the south,” said Shelton in discussing the project with Salisbury City Council, which also considered the matter at Monday’s meeting. The site for Project Finishing’s possible new facility will be located where HBD/Thermoid Inc. once operated. They would create 29 new blue and white collar jobs over three years, with 15 jobs the first year, six the second and eight the third year. The grants all have requirements of some kind that will hold the company accountable if it fails to fulfill the hiring promises. In addition, the company has promised to invest just shy of $7 million in the project and they must make a good faith effort to meet that investment, Shelton said.

The city approved economic development incentive requests for Project Finishing consisting of: permitting an applications to the State of North Carolina for a Building Reuse Grant in the amount of $150,000 (which will require $6,000 of “matching funds” from the city), a One NC Fund grant in the amount of $50,000 (which requires a matching amount from the city of $1 for every $2 in the grant or $25,000), a local Level 1 Incentive Grant estimated to total $136,814 over a five year period (which will come from the taxes paid by the company), and hiring a grant administrator in an amount not to exceed $6,000.

The board of commissioners also passed the motion to designate the week of Nov. 7-13 as an observance of Operation Green Light, where the county will commemorate veterans of the military. Businesses and citizens are encouraged to display a green light outside their window to show their support.

Operation Green Light was founded in order for veterans to gain access to their federal benefits with the help from local county veteran service officers.

“This is the first year we did it, so I look for it to go forward in the future,” Caskey said. Operation Green Light will also be acknowledged during Veterans Day on Nov. 11. 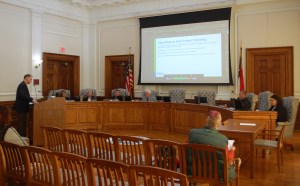