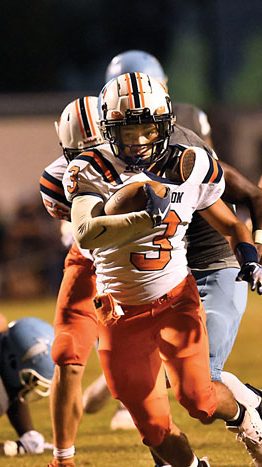 Jordan Galarza had a huge running night for Carson. File photo by Wayne Hinshaw, for the Salisbury Post 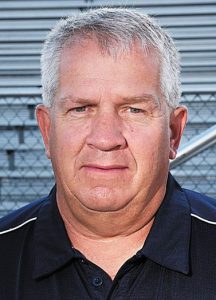 Joe Pinyan, who coached Carson through some good times and some tough ones.

Joe Pinyan, who coached Salisbury to a state championship a dozen years ago.

If Carson was going to win at Concord, it would need heroes. Lots of them.

Carson found heroes in a remarkable 20-13 victory on Thursday on E.Z. Smith Field at Bailey Stadium. There’s turf on that field now, but fantastic Concord teams played on the grass in that stadium. The Spiders’ football battles with A.L. Brown, the Bell Games, were celebrated for generations before Carson ever opened its doors for students.

Before Thursday, Carson had never beaten Concord in football. Even Carson’s 2010 team, the best one, the one that had taken it to a state-champion Salisbury team on an unforgettable night in China Grove, had lost to Concord.

This is Carson’s 17th season of football. Carson entered the Concord game with an all-time record of 66 wins and 118 defeats. That’s roughly four wins per season. Despite some legitimate legends — Shaun Warren, Brandon Sloop, MyQuon Stout, just to name a few — this is not a sport the Cougars have been great at. They’ve never been conference champions. They’ve only won two playoff games. In a county where West Rowan, Salisbury and North Rowan almost always win playoff games, the Cougars have gotten used to not getting much attention.

“We’re going into the Concord game with a 1-4 record, but then you look at the teams we’ve lost to,” Lowe said. “Statesville is good. Robinson is really good. We went toe-to-toe with West Rowan and they’ve won five games. We had our chances to beat Mount Pleasant and they’ve won five games. We talked all week that we’re a good team and that we’re just now hitting our stride. Our goals for this season are still within our reach.”

Thursday’s victory by the Cougars started well before the kickoff.

Maybe it started with offensive line coach Zack Overcash, who came up with an innovative way to get in the play calls.

Or maybe it started with running back Jordan Galarza, who asked Lowe for a private conversation two hours prior to kickoff.

“I thought maybe it was going to be something bad,” Lowe said. “But he just wanted to let me know that as a senior he could see the end of his football days at Carson coming and he wanted me to know that he loved this team and that he wanted to give it everything he had in the time he had left. He said, ‘Let’s go get it.'”

Fullback Dalton Gay was injured and wouldn’t be playing. That was a worry. He only carries the ball once or twice a game, but he blocks. The Cougars were worried about how his absence would affect their running game. The Cougars aren’t deep. Carter Breitzman, a starting linebacker, would have to step in for Gay, which meant he’d be playing virtually every snap.

“We knew Carter would do a good job,” Lowe said. “But the best thing was Dalton Gay became Coach Gay for us. He was on the sideline coaching Carter. He even suggested a blocking adjustment that we used in the second half. It was a factor in us winning the game.”

Things did not start out well at Bailey Stadium. Concord looked too fast for the Cougars to contain, especially quarterback Keyon Phillips.

Concord rolled for a touchdown. Then Carson was fortunate to hold the Spiders to a field goal. Concord led 10-0 after the first quarter.

“We’ve played against some great athletes, but I think Phillips is the best we’ve faced,” Lowe said. “No. 3, he’s a real star. I was impressed with everything Coach (Darren) Shepherd and Concord are doing.”

But then it was suddenly 10-6. Carson QB Michael Guiton found long hoops star Jay Howard on a slant for a 36-yard touchdown.

“Jay missed a practice, so he didn’t start,” Lowe said. “But then he comes in and makes a big play for us.”

Luis Avilez, Carson’s reliable kicker, hit the bar on the PAT. That was a bad break. The Spiders still led 10-6.

The teams  exchanged hard-nosed possessions, stops and punts. Carson’s defense, anchored by active linebacker Jake Ross, was bending and stretching, but was starting to dig in.

It was still 10-6 at the break. Both teams knew it was going to the wire.

Carson would receive the second-half kickoff, and coaches in both locker rooms preached that the possession would be pivotal.

Galarza, all 5-foot-6 and 156 pounds of him, was ready for the best minutes of his life. He would run as if he weighed 206. As he’d promised Lowe before the game, he was ready to give everything — and then some.

Carson’s offensive line was ready. Breitzman was ready. It would be on their backs. Nothing fancy. They weren’t going to try to out-sprint Concord to the edge. It would be downhill. They were coming straight at the Spiders between the tackles.

Jay McGruder came in to give Galarza a break. McGruder put his head down, kept his feet moving, kept the drive going.

Then Galarza was back in the huddle. On fourth-and-6 at the Concord 13, the Cougars weren’t thinking field goals or passes. Guiton gave the ball to Galarza, and he shot through a massive gap for 11 yards. From the 2, Galarza hammered in the touchdown that put Carson ahead 13-10. It was 16 plays. It was 16 runs. Carson led 13-10.

Concord has a proud tradition. The Spiders responded with a 40-yard field goal. It was 13-all heading to the fourth quarter.

Concord stubbornly went for it on fourth and less than 2 from the Concord 44. The Spiders only got a yard before Ross and two of his teammates got there. Officials measured, but Carson clearly had the stop and had the ball in Concord territory.

Tough yards lay ahead. Galarza and McGruder got some of them. Then CJ Guida got 20 on a third-and-10 when he caught a fade from Guiton for 20 yards.

Then on second-and-6 from the Concord 8, slot receiver Emory Taylor took two steps and was wide open. Guiton calmly delivered the ball to him and with 3:42 left in the game, Carson led 20-13.

The ensuing kickoff was a wild thing. It went bouncing crazily down the sideline, but it stayed in bounds, and the first one to get there was Carson’s Trevor Vaughn. He dived on the ball.

“That turned out to be a 35-yard onside kick for us,” Lowe said with a smile. “All because of Vaughn’s hustle. He looked like he’d been shot out of a cannon.”

Carson was able to run some clock, got one last stop and finished a memorable game in the best possible way.

“First time we’ve gotten to use our victory formation,” Lowe said. “We realize there’s a lot more to football than wins and losses, but this is a game, winning at Concord, that our guys will  remember for the rest of their lives.”

Lowe had praise for everyone in a Carson uniform but his highest praise went to the offensive line.

“We needed heroes, and they were our heroes,” Lowe said. “Drue Gillis, Bryson Bare, Garrett Christy, Jervey Hill, Tristan Ruhnow, Tristen McBride. McBride played on both lines and was so exhausted at the end he could barely walk. But he’s one of our best players, and that’s the kind of effort that we ask of him.”

There’s no rest for the Cougars.

The Cougars respect the Trojans. Any team that beat West Rowan has their respect. But they’ll embrace the challenge.

“I think we are capable of being as good as anyone in our league,” Lowe said. “We’ve played two good SPC teams, went toe-to-toe with one and beat the other. We believe in each other and we believe in the cause. The destiny of the 2022 Cougars is still in on our hands.”