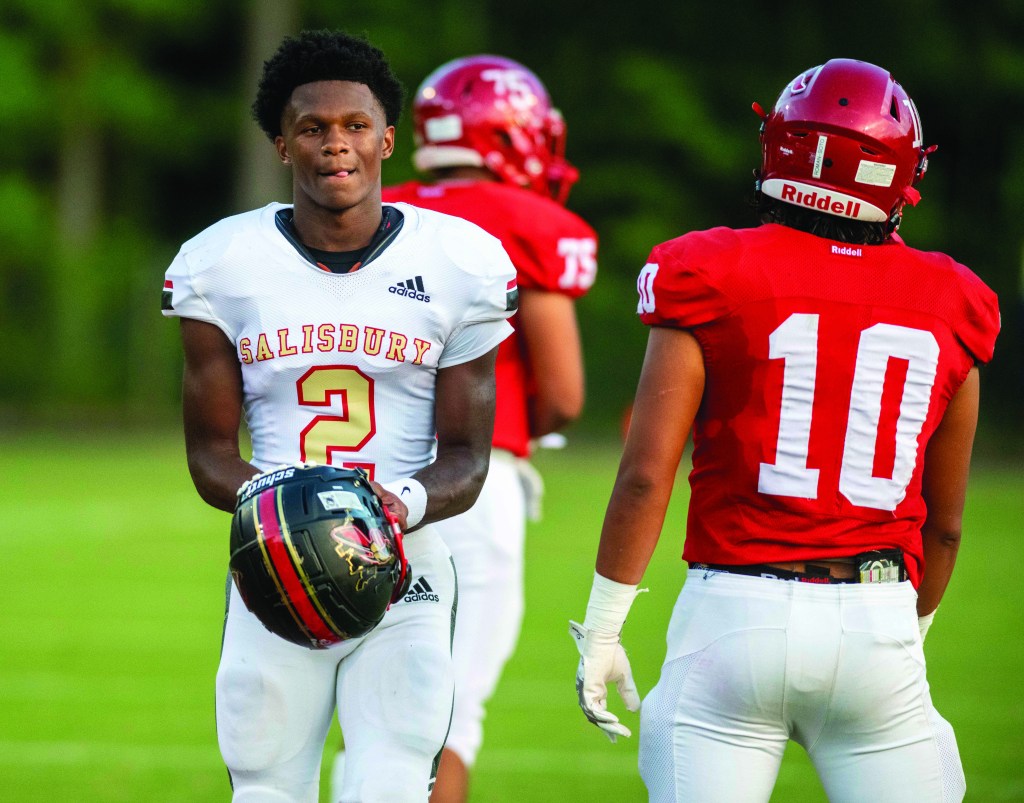 Salisbury high quarterback Mike Geter (2) tweaked an ankle two weeks ago but should be ready to go against North. File photo by JON C LAKEY / FOR THE SALISBURY POST. 9/2/22, Salisbury,NC.

DENTON — Nine carries isn’t a lot of  work, but JyMikaah Wells made the most of his touches in Thursday’s 59-0 running-clock romp at South Davidson.

The senior put four carries in the end zone from long distance and he amassed 233 rushing yards, more than 25 yards per carry.

“He had another great game,” Salisbury coach Clayton Trivett said. “And I think we’re still getting better every week as a team.”

Wells has scored 10 touchdowns for the Hornets (6-1, 3-0 Central Carolina Conference) the past two weeks.

Wells went over 1,000 rushing yards for the season, despite missing an entire game with a sprained ankle and most of another. It’s his third 1,000-yard season, and only a handful of backs have accomplished that feat in Rowan County history. Wells had 761 yards as Salisbury’s No. 2 back when he was a varsity freshman on a state runner-up team.

Wells was the primary running back as a sophomore for the SHS team that won a state title in the spring of 2021 and was the workhorse again last fall as a junior on a CCC championship team that broke a lot of records.

He’s up to 4,516 rushing yards for his career. He’s No. 7 on the all-time list for the county and has a chance to finish his career No. 3 behind West Rowan’s K.P. Parks and Carson’s Shaun Warren.

With Wells, quarterback Mike Geter and a smothering defense, the Hornets aren’t the ideal homecoming opponent, but South Davidson still put on a good show at Briggs Stadium, especially at halftime.

Geter ran for a touchdown, threw a touchdown pass and picked off two passes as a defensive back.

South Davidson had the ball first, went three-and-out, and the Hornets promptly blocked the punt. The ball caromed high in the air and the Hornets’ Dashawn Brown looked like an infielder waiting for a popup to come down. He caught the ball and had an easy six.

Wells banged out some decent gains before Geter flipped a 10-yard touchdown pass to H-back Damian Brandon on a fourth-down play. Brandon doesn’t get many passes thrown his way, and he scored joyously. Hank Webb’s kick made it 14-0.

After a Jamal Rule interception, Wells got his first touchdown of the night, breaking loose from the South Davidson 41 for a 21-0 lead.

That touchdown gave Wells the school record at Salisbury. It was the 59th of his career to surpass Romar Morris, one of the heroes of the 2010 state championship team. Wells would finish the night with 62 touchdowns.

Geter zig-zagged 15 yards for a score after South Davidson failed on a faked punt and handed the ball over to the Hornets on the Wildcats’ 32.

Wells got the next two scores. One of them was on a one-play “drive” after a South Davidson punt. He took that one 53 yards.

Amare Johnson blocked a punt and made the scoop to push the Hornets’ edge to 46-0 shortly before halftime festivities.

Wells and Rule added rushing TDs in a fast-moving second half.

The only thing to complain about from a Salisbury perspective was extra points (5 for 9, with some blocks) and penalties. Geter lost several big pass plays due to flags and he also had a pick-six negated by an illegal block.

“We got a little sloppy at times with the big lead, but we got a lot of guys quality reps,” Trivett said. “We’ll keep working.”

The Hornets have a big one next week. East Davidson (4-2, 2-0) put up 52 points against North Rowan on Thursday and will come to Ludwig Stadium next Friday still undefeated in the CCC.