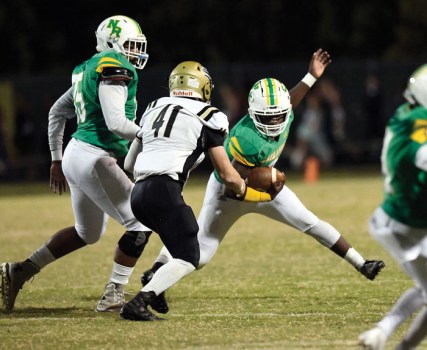 North's Jeremiah Alford looks for an opening as East Davidson's Ethan Cabe (41) closes in. photo by Wayne Hinshaw, for the Salisbury Post 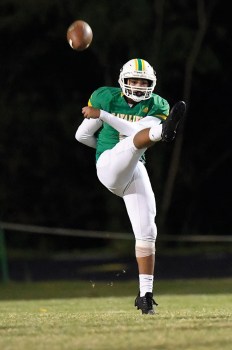 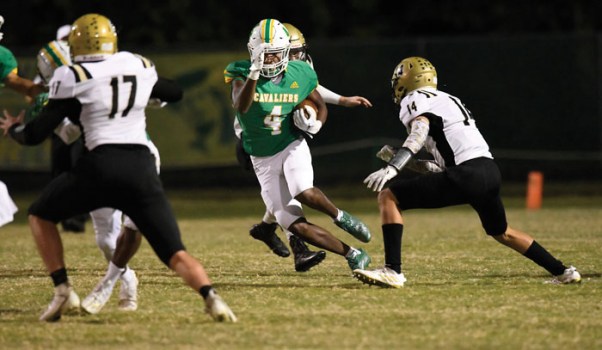 SPENCER — It’s now seven games into the season and North Rowan’s football team is struggling to transmit a clear picture of what it really is.

Are the Cavaliers that lively, early-season group than manhandled three straight opponents, sending an all-points-bulletin forewarning the rest of the Central Carolina Conference to take notice? Or are they the squad that’s grown soft on defense, yielded 97 points in its last two league outings and fallen into fifth place following Thursday’s 52-27 homecoming night loss to visiting East Davidson?

“I don’t know the answer,” frustrated third-year coach Nygel Pearson said after North (4-3, 1-2 CCC) allowed 516 total yards and never gained any traction against the Golden Eagles. “You got some ideas for me? I don’t know, but we’ve got a bye week to try to figure it out. We’ve got things to clean up.”

North finds itself reeling after second-place East (4-2, 2-0) imposed its will on the Cavs, rushing for 477 yards and scoring on eight of its 10 possessions.

“We just need to execute better on defense,” said NR linebacker Khalil Davis. “We need to lock in more and stay focused. There’s definitely more we could have done. If we could have stopped the run, we would have had a chance.”

Instead, North’s porous, peak-through-your-fingers defense allowed seven East touchdowns and a 25-yard field goal by junior Eris Romero. “Bad tackling, not coming off the football — you name it, we did it,” Pearson lamented outside the quiet North locker room.

The Cavs had no answer for East quarterback Brogan Hill or fullback Josiah Allred. Hill —  a durable, 6-foot-2 junior — exceeded 100 yards rushing in each half, finishing with 228 on 27 carries. He rumbled for four touchdowns, including a 41-yarder on a QB draw play that gave East a 34-13 advantage just 84 seconds into the third period. Allred used his brawn and strength to power for 223 yards on 23 attempts. He scored a pair of first-half touchdowns.

“They were some tough runners,” said Davis. “It took a lot of power to put them on the ground. What we needed was all hats to the ball, all the time.”

Winning coach Vance Hanner says East has been tough on everybody.

“It doesn’t matter who we play. We’ve moved the football all year, even against some 3A schools,” he offered. “Those guys are pretty special but, in this offense, they have to be. We can’t be throwing it around. We don’t have the skill kids for that. But we’re going to try to establish the run every week.”

East did that on its first possession, navigating behind an inspired offensive line and marching 60 yards on 10 plays for the game’s first score. North tied it 7-7 when quarterback Jeremiah Alford called his own number and raced 51 yards for a TD late in the opening quarter. It was 21-7 East early in the second when North’s Jaemias Morrow returned a kickoff 90 yards for a touchdown, sending a buzz through the mid-sized weeknight crowd. But the Eagles responded with another efficient touchdown drive and opened a 28-13 halftime lead.

“That’s a pretty strong team, running-wise,” said Alford. “The guys up front did a lot for them.”

Alford did his part to keep North within striking distance. His 44-yard touchdown pass to Amari McArthur trimmed NR’s deficit to 37-27 with 6:08 remaining. East put this one in the safe by scoring TDs on its last two possessions — Hill’s 40-yard scoot around a sealed-off left edge and later, his 35-yard touchdown pass to a wide-open Romero with 1:11 to go.

“It feels like we weren’t engaged in the game,” McArthur said after making seven receptions for 130 yards and scoring his fifth and sixth touchdowns. “It was homecoming and there were a lot of distractions.”

Alford completed 11 of 21 passes for 247 yards — including 176 in the final quarter. But without a stable running game, the Cavs were severely limited.

Not only that, East has now made North somewhat of a long-shot to make the state playoffs. Two weeks ago, followers were all but fitting the Cavs for post-season jerseys.

“If we win out, we’ll still be in the playoffs,” said Pearson. “And I’ll be fine with that.”

“What’s important,” Davis concluded, “is that we stay united and not give up on each other.”

NOTES: Alford was North’s leading rusher with 83 yards. Morrow endured his second sub-par game in a row, netting only three yards on six carries. He caught a 28-yard pass early in the fourth quarter. … Pearson couldn’t confirm whether or not North linebacker Khor’on Miller suffered a concussion in the first half. The junior never returned. … Softball and basketball star Chloee Stoner was named Homecoming Queen and Malakie Harris the Homecoming King. … North is idle until Oct. 14 when it visits West Davidson. East plays at Salisbury in a battle of CCC unbeatens next Friday.

Varsity high school games were played on Thursday due to Hurricane Ian.

The win on the road against the defending South Piedmont Conference champs put the Cougars in the league race.

Taylor caught the game-winner from the 9, and Trevor Vaughn’s recovery on the ensuing kickoff helped Carson kill the clock and seal the win.

Much more on this game will be in Sunday’s edition.

JyMikaah Wells rolled to another big night for the Hornets and broke the school record for career touchdowns. He entered the game tied with Romar Morris with 58.

West Rowan lost for the first time in two decades to Northwest Cabarrus.

The key was Northwest’s defense. West (5-2, 2-1) struggled to run the ball in the South Piedmont Conference showdown and the Trojans were able to bring pressure and picked off three passes.

West’s only TD came early in the fourth quarter on a Lucas Graham to Evan Kennedy pass. Adrian Stockton topped 100 yards in receptions.

East Rowan was off this week. A.L. Brown is playing at home on Monday against Cox Mill.

More on the high school football games will be online and in Sunday’s print edition.