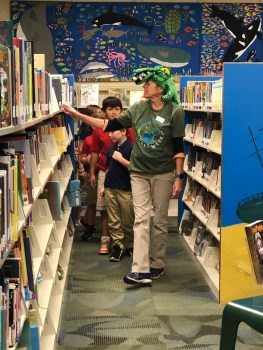 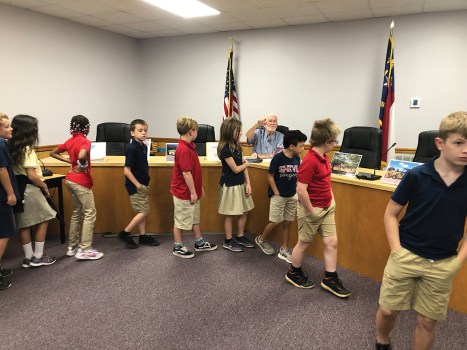 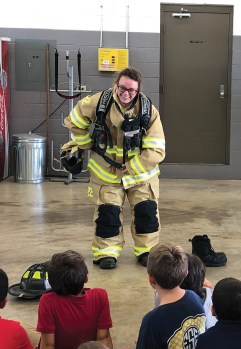 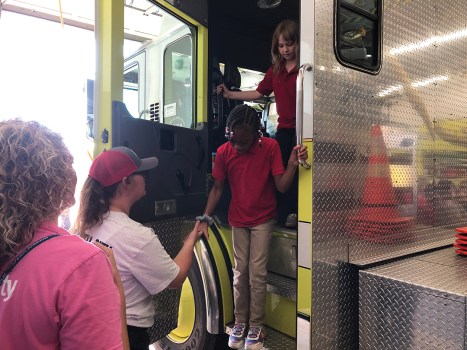 Madeline Wagoner/Salisbury Post — Shive Elementary School students get a look inside the driver's seat of a fire truck. 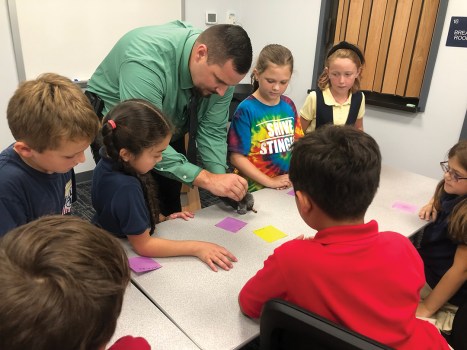 ROCKWELL — To learn about what taxes are used for, the third grade class of Shive Elementary School in Rockwell had the opportunity to tour the local public services of their community to understand its importance to provide safety, education and dependability.

Paula Lambert, a teacher apart of the field trip, said the purpose was to teach students how taxes fund the important facilities that are part of their everyday lives.

“When we get back to the classroom, we’ll discuss which one they would cut if there were not to be enough funding for them all,” she explained. “It gives them a conversation to have about why each is important.”

Students even got to meet Mayor Beauford “Beau” Taylor, who has been serving as executive director of the town for 19 years and is the grandfather to one of the students at Shive Elementary. He opened his presentation with the gavel that signals the start of meetings

Taylor explained how he oversees all the departments, almost like how their teacher takes charge of them when they go to school.

“Most importantly, I’m the one who signs our staff’s paychecks every two weeks,” he said.

The presentation went on to share his story working at Food Town, now renamed Food Lion, for 30 years before being a part of a municipality. Students learned that there are 2,340 citizens currently living in Rockwell and that the town was established in 1911, but stories have it that the history dates back even further.

In the 1800s, what would be known as Rockwell was an area of land that was a stop for trains and horses used for transportation. There was a well in the area that people would bring their horses to for a drink, then calling the land “rock well” because of its use to their travels which caused the name to stick when it came to naming the town.

The town hall used to be the home of many local services for the community including being a bank, fire hall and library at some point thought out its 111 years. The safe is still part of the building which now keeps documents secure behind its heavy, lockable door.

Taylor went on to explain the purpose of each department in the town, from administration handling paper work and citizen concerns to public works keeping parks and the town clean and taken care of. He did not go into the police and fire department, as those two were stops along the field trip that Shive Elementary’s third grade class would learn later on in the morning.

“It’s very likely that without learning science, math and computers that I would not have become mayor,” said Taylor. “So listen to your teachers.”

To learn more about the departments, the local fire team showed students the intensive duties when firefighters get alerted by an emergency. Children showed curiosity about the yellow colors of the town’s fire trucks, which they found out was for visible purposes to signal it was an emergency vehicle. The newest addition to fire team, full-time firefighter Kenzie Overcash, demonstrated to students the process of equipping gear to fight a fire, including the covering of all areas of the skin and having a mask to provide clean oxygen.

Just in front of the station was the next stop for students which would show them the inside of a police car and how officers use fingerprints as evidence for criminal identification or leads.

Police Chief Cody Trexler explained how the dust used for finding fingerprints is made of volcanic ash and that a small jar can cost up to $14, but a little goes a long way.

Students were instructed to press on a sticky note with their thumbs before staff came around to do a light dusting over every sheet in the department’s training room.

When one student asked how the dust finds these prints, Trexler explained “We’re made up of 80% water. When you touch something its leaves water and protein. The dust adheres to that.”

Andres, one of the third graders, said this was his favorite activity of the day because it was one he had never done before.

A more imaginative spot on the tour was the library where students were brought downstairs at the East Branch of the Rowan County Library to explore the “Reader Reef”, an aquatic-themed collection of books catered to elementary grade readers and younger. Librarian Charlene Horne presented an assortment of different ways to read including easy reader books, graphic novels, easy fiction, biographies and autobiographies. Among these, students at Shive raised their hands and expressed their likes to books such as Dr. Seuss classics and the comic “Dog Man”.

“My favorite (tour stop) is the library,” said Silver, a student in Lambert’s class. “But I would say it would be the one to get rid of. Police and firefighters keep us safe.”

Many students favored the library as it hosts a variety of activities that do not always include reading, but do encourage the exploration of learning and visiting their local library.

According to Lambert, the tour of public services had been something Shive Elementary went to Salisbury for before the COVID-19 pandemic. This was the first time bringing it back in two years while keeping the children within their local municipality of Rockwell.