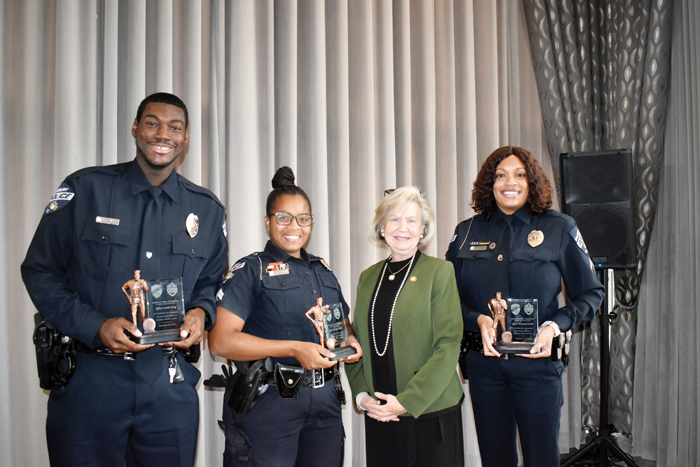 SALISBURY — At its first fundraiser since its inception, the Salisbury Police Foundation got a bit of a happy surprise Wednesday.

Salisbury Police Chief Jerry Stokes opened the luncheon by pointing out that the “hard work by these officers is not always recognized or seen.”

“When I ask candidates for a job with us why they want to be police officers, they say things like they have a desire to help others, to give back to their community, and to stand up for those who can’t stand up for themselves, and those are all things a chief wants to hear,” he said. “But this job comes with a price. Every time you go out the door to work, you wonder if this is the last time you will kiss your spouse goodbye. Every time to answer a call, you wonder if this is the last call you will answer. You wonder if you will have to do something no officer wants to do, and take another life in order to protect your own or someone else’s.”

The SPF exists, he said, to help police officers deal with that stress and have long, successful careers, because no city’s budget is large enough to encompass all the mental and emotional health needs brought on by that level of constant stress.

Which is one reason Stokes, who was already looking for a way to help his officers, said the light went on when his department and the Gerry Wood Auto Group got together for an annual event and donated more than 100 bicycles throughout the community.

“I began to wonder if we couldn’t put together a support organization here like I’d seen in other communities,” he said.

Over time, and through the pandemic, he and a number of committed citizens, began to work on it. A grant from the Robertson Family Foundation allowed the organization to get its 501(c)(3) designation. A board was formed, and Struzick was chosen president, though he insists they work as a team.

They got together and planned an inaugural luncheon fundraiser that they hope is the beginning of ongoing fundraising efforts.

Wagoner described how far the police profession has come, reminding people of the old television show Dragnet, and the main character, Joe Friday.

“Today’s officers are far mored heavily equipped, and they have to understand how to use all that equipment,” she said. She said many of the laws that officers have to be aware of, including the Miranda requirement, had not been passed when Joe Friday was on the beat.

“These days officers are expected to be compassionate like pastors…fearless like soldiers…stealthy like a cat…have the memory of an elephant…the diplomacy of a congressman…the legal knowledge of a lawyer…the intelligence of a professor…and the impartiality of a judge,” she said. “Police officers are society’s problem solvers when no other solution is available or apparent.”

She said that while she works with them on a daily basis, she does not understand them and their willingness to put their lives on the line every day for strangers. “I just thank God for continuing to turn them out.”

And then Gerry Wood had a moment to speak. He said he and his wife, Brenda, have personal reasons for supporting police. Their son is a senior officer in Canada, closing in on retirement, and as parents, they have been on the inside of having someone on the force and both the pride and the worry that goes with it. In addition, Gerry Wood said his grandfather was a “Bobby” or police officer in Liverpool, England.

“We have a great affiliation with and affection for the police department,” he said. “In my world, I have a ‘get it done’ approach, so today, I remind you all that we need to raise funds to help these officers who help so many others. To encourage that, I am putting up $25,000 in matching funds. Anyone who donates to the SPF in the month of October, I will match it, up to that amount. So go tell your friends and family and co-workers to make a donation.”

Struzick was brought to tears by Woods’ generosity and support.

“Thank you all for coming out today to support these officers, who stand at the ready every day to put their lives on the line for us,” he said. “And thank you to Mr. Wood for that level of commitment and that motivation.”