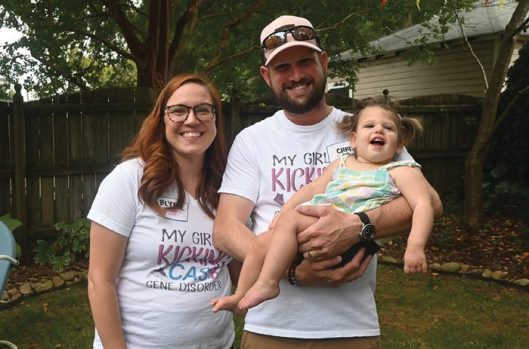 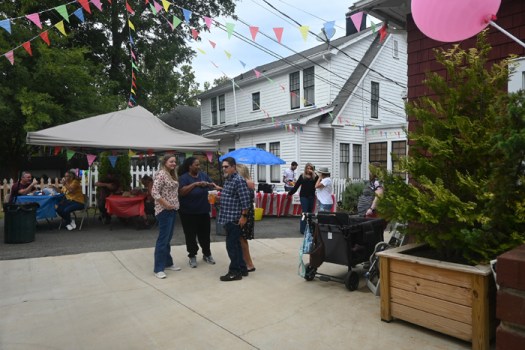 Madeline Wagoner/Salisbury Post — Maggie Derby's family says they are most grateful to the community for the overwhelming support of the child and the fundraiser they held Saturday.

SALISBURY — A little girl with a big smile and big goals lives with her family on West Thomas Street and they have made it their mission to be supportive of her and to advocate for other disabled children.

Maddie Derby was diagnosed with the CASK gene disorder at 8 months old after genetic testing for the calcium/calmodulin-dependent serine protein kinase (CASK) protein. The earliest signs, according to her mother Blythe Derby, included failing her newborn hearing screen, which is administered to babies just a day or two after they are born. At 4 months old, an MRI showed that Maggie’s brain was not fully developed.

“They were able to find out early,” Blythe said. “Most aren’t diagnosed until they’re much older.”

Because of the genetic neurological mutation, Maggie’s cerebellum is underdeveloped in addition to having epilepsy. Cerebellar hypoplasia causes a lack of coordination and balance, which is something she is already is seeing the effects from in addition to low muscle tone and hearing and vision impairment. Currently, only 231 individuals are registered worldwide to have CASK.

In January, she will head to Virginia with her family to receive intensive therapy at Fralin Biomedical Research Institute for four weeks, working one on one with a therapist four hours a day, five days a week. Blythe said that while the hospital will target what they see as specific needs, it is a good idea to have some goals in mind.

At the moment, Maggie is learning to pull using surfaces, but she cannot keep her balance to hold herself up. She also relies on a feeding tube to eat, so her mother would like to see her begin to eat more normally.

On Saturday, the family held a fundraising barbecue for the expenses required for Maggie’s therapy. Those who stopped by the home were given the option to purchase a meal and make donations for optional raffle prizes. Every dollar raised will go for the intensive therapy that costs around $19,000 for every four-week session.

Blythe gave up her job when her daughter was 9 months old so she could provide care 24 hours a day. Although only 18 months old, she has already taught her family a world of lessons about the lack of accessibility for those who are disabled.

Some examples of challenges Maggie’s mother has faced include shopping carts unfit for children who can not sit up and restroom changing tables that are too small for children who continue to grow, needing diaper changes and other needs that require a private stall.

Maggie is involved with occupational and physical therapy sessions twice a week before beginning her intensive visit to Fralin Biomedical Research Institute in January.

Monique Owens, Maggie’s grandmother, worked with her daughter to plan Saturday’s fundraiser. The event took around two months to plan and about 150 people called to say they would offer support, Owens said.

“Being Maggie’s grandmother has been very humbling,” she said. “You’re not aware of things for people with disabilities. It opens your eyes to inclusivity and to people who are different than yourself.”

Owens said she believes awareness begins with educating mothers on how to talk about disabilities with children, and also as a topic for discussion in school classrooms. She said that even when raising her children, they were told to not stare when seeing someone different in public, but this opportunity allows them to ask questions to learn and accept what may not be normal to them.

“We’re more than open to answering questions,” said Blythe. “That’s the only way people are going to learn.”

It is not only community support that the Derby Family has received. Nickole Hart, board member of the CASK Gene Foundation, drove two hours with her daughter Taryn to be at the Maggie Kicking CASK fundraiser barbecue to show her support. Her child was also diagnosed with the genetic mutation when she was 3.

She also advocates for families with loved ones who have the disorder. She said it is the only way for her child to be accepted and for other similar children to be accepted also.

Taryn was first diagnosed with autism before genetic testing revealed she had a genetic mutation. Nickole Hart’s oldest daughter also has autism, but the mother knew there was more to her daughter’s condition as she began to lack coordination and balance along with her autistic tendencies.

“This is why so many children and individuals are diagnosed later in life,” she said. “But mommy gut is real.”

She continued to say that the community is a “wealth of knowledge” and it is up to that community of those who are aware of CASK to educate the public on how the world can be better to accept and accommodate to those with disabilities.

The fundraiser brought in $7,441. To follow Maggie’s story in addition to other donation opportunities, visit the Maggie Kicking CASK Facebook page.