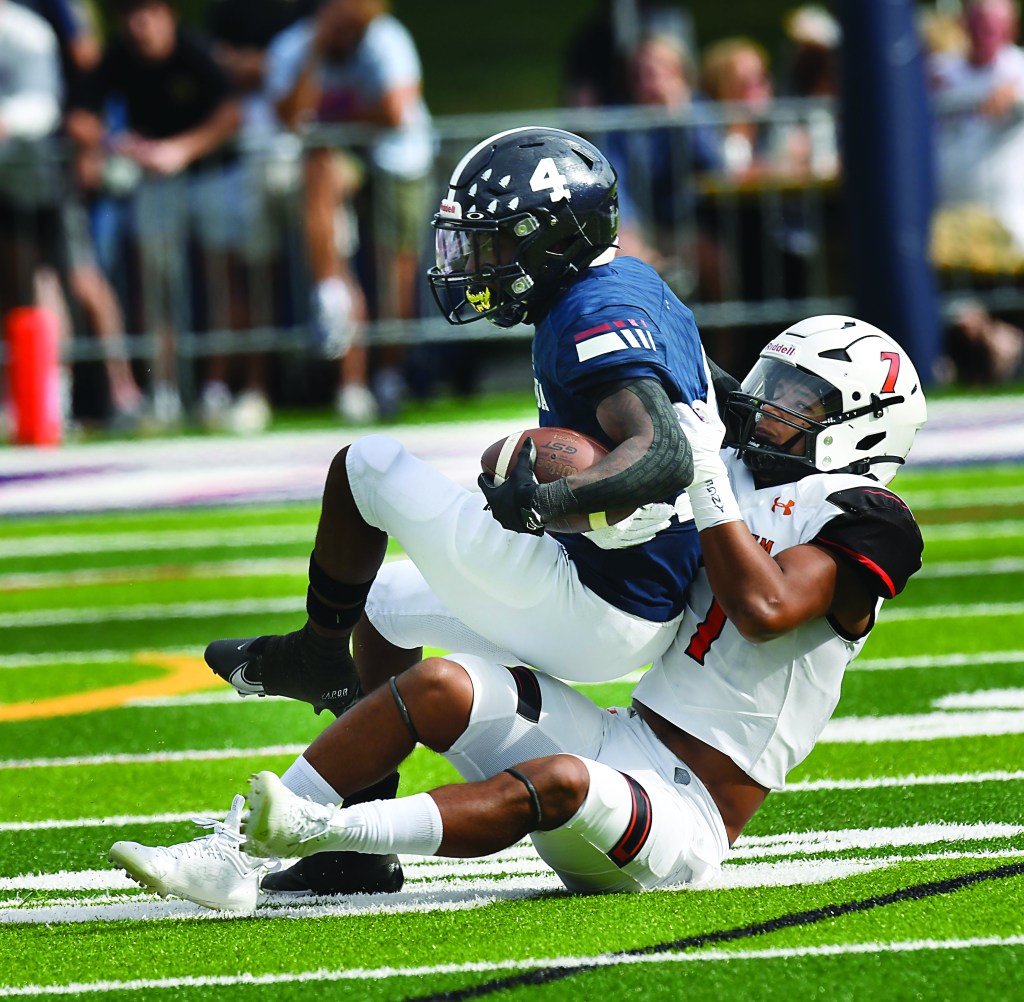 *Due to the expected impact of Hurricane Ian, Catawba’s game at Emory & Henry has been moved from Saturday to Friday at 3 p.m.

SALISBURY — The Catawba Indians and Livingstone Blue Bears have more in common this week than the fact that they’re coming off lopsided home losses.

Both are designated homecoming opponents as they head north.

Catawba (1-3, 0-2 South Atlantic Conference) will play the Emory & Henry Wasps in the Virginia highlands in a game that now has been moved up to 3 p.m. on Friday, while Livingstone (1-3, 0-2 CIAA) will take on the Bowie State Bulldogs, roughly 16 miles west of Washington, D.C.. That one is still scheduled for  2 p.m. on Saturday.

Everyone wants to win their homecoming game in front of what is normally one of the biggest crowds of the season, so you schedule someone as a homecoming guest that you’re confident you can beat. Catawba and Livingstone are currently programs that are inspiring confidence in opponents.

There’s a certain measure of disrespect in being a designated homecoming opponent and coaches have used that disrespect as motivation for as long as there have been homecoming games.

Temperatures are expected to be in the 50s in Emory, Va., and in Bowie, Md.  That’s not cold, but when you throw in potential rain from Hurricane Ian and stronger than usual wind, it’s going to be uncomfortable.

Whether it will get uncomfortable on homecoming for the home teams remains to be seen.

A friend was listening to the Catawba-Shorter game a few weeks ago on WSAT and realized he didn’t know the Catawba names any better than he did the Shorter names.

He’d hear something like “Hill hands off to Parker for a gain of 2 yards” and still have no idea which team had the ball.

Even after four games, it’s still a mostly unfamiliar Catawba roster, although everyone — including opposing coaches — has figured out who Kujuan Pryor is by now.

The Catawba roster is overwhelmingly a roster populated by freshmen and sophomores, and it’s hard to win in the South Atlantic Conference with freshmen and sophomores. In football math, youth equals mistakes and turnovers and miscommunications. That  mean losses and growing pains, which have been cheerfully administered in heavy doses by old adversaries Mars Hill and Tusculum — 38-7 and 50-17 — in Catawba’s two SAC games.

Most of the fun Catawba has had so far has come on special teams, with Pryor returning two kickoffs for touchdowns and Clayton Crile crushing punts and kicking a 53-yard field goal that tied the school record.

Catawba drew an encouraging crowd of 2,150 for last Saturday’s home opener. That’s a positive. There will be more positives.

Catawba won’t be home next week, either. The Indians will play at Wingate on Oct. 8. That will be make it five out of the first six games on the road. Surprisingly, the Indians will not be homecoming guests for the Bulldogs.

It’s not like Catawba can’t win at Emory & Henry, but to do so the Indians will have to play much better than they have so far.

Emory & Henry is an interesting story. The Wasps played football at the Division III level — that means no athletic scholarships — for 48 years.

The Wasps went 6-4 playing against familiar D-III opponents in 2021 before moving up to the SAC for this school year. They are not yet eligible to win the conference championship, but they will be in the fall of 2023.

Emory & Henry (2-2, 1-1) has been shockingly good so far this season, losing in overtime to highly regarded Newberry and winning at Wingate last week in two overtimes.

Looking at the stat sheet, it’s not obvious how Emory & Henry managed to beat Wingate. The Wasps had modest offensive numbers and they lost the turnover battle.

Where the Wasps were good was on defense. Those guys got off the field. They halted Wingate short of the sticks 15 times on 18 third-down plays.

The biggest thing the Wasps have going for them is experience. Their roster is the opposite of Catawba’s roster. There are lots of program guys at Emory & Henry — juniors and seniors and plenty of fifth-year students.

The Wasps are recruiting well in southwest Virginia, eastern Tennessee and western North Carolina, so they’ve built some depth.

They’ve gotten help through the transfer portal. Quarterback Kyle Short, who threw the key TD pass against Wingate, is a transfer from University of Charleston.

Tmahdae Penn, who made the key catch against the Bulldogs, used to be a top receiver for Ferrum.

Emory & Henry also has an experienced big back in 235-pound Grayson Overstreet, who transferred from Richmond.

Catawba has played Emory & Henry 20 times and won 16, but that won’t have much relevance on Friday. The programs haven’t played since 1977.

This has been a difficult stretch for the Blue Bears. They played at Virginia Union, the CIAA’s most prolific offensive team. Then they played Virginia State, the CIAA’s toughest team to score against. Now they get Bowie State, three-time defending champs in the league. It’s never easy going to the Dawg Pound.

It was pretty much a given when the schedule was announced that Livingstone would go 0-3 in this stretch. The Blue Bears just have to survive it without losing players and losing confidence. When they get into Southern Division play, they’ll have opportunities to win their share.

Bowie State did not play very well last week, by any means. The Bulldogs led St. Augustine’s 22-20 in the fourth quarter before they turned it up a notch to win 36-20.

Bowie State’s running game hasn’t been overwhelming, but the Bulldogs are one of the CIAA’s best passing teams. QB Dion Golatt Jr. has completed 60 percent of his passes for 945 yards.

The CIAA stat sheet isn’t very kind to the Blue Bears. The strength of their opponents the last two weeks has something to do with that, but they are last in the CIAA in rushing yards and last in the league in total offense.

Bowie State smashed Livingstone 49-0 in the most recent meeting of the programs in 2021.

Livingstone’s most recent victory in the series came in 2014 when the Blue Bears pulled out a 36-33 triumph.