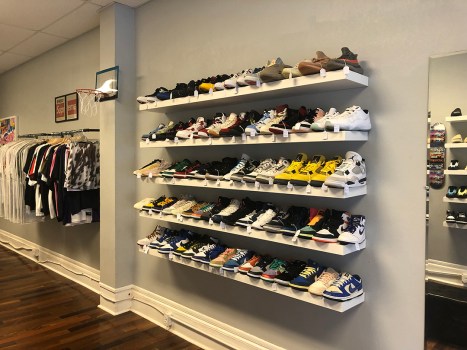 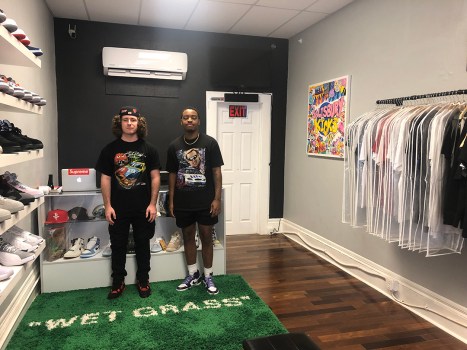 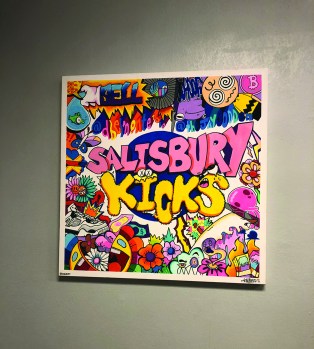 SALISBURY  —   After seeing a need for a footwear store catered to designer wear and athletic shoes, two men took their freelance business developed just out of high school to a storefront downtown.

Jonathan Gooden and Dalton Belmonte are the owners of Salisbury Kicks at 207 S. Main St.

They graduated from West Rowan High School in 2018 and reminisced about the booming economic life that used to be where the West End Plaza is now on Statesville Boulevard, with a cinema, skating rink and busy mall loaded with vendors.

“We want to bring neat things back to Salisbury,” said Belmonte.

Gooden agreed, saying that the two saw a need for a store such as theirs in the area.

Their long term goal is to open a store in a mall, but upon researching, renting a store in a mall can be thousands of dollars  a month. So Gooden and Belmonte opened Salisbury Kicks on July 6 with the focus on development of their first brick and mortar store.

“It was something we never looked into or thought was possible,” Belmonte said.

The two were set up to work an unpaid position at the store for six months to gain experience in the industry. However, when the previous owner’s plans fell through, the two took it upon themselves to begin making money as owners of the store.

Jason Wallace set them up with a lease for a spot on South Main Street, which took two and a half weeks to prepare before opening. Installation of shelves, cases and artwork were some of the basics to display their collection, but over the last two months, they doubled the pairs of shoes they have available.

The store’s inventory has expanded to 350 after they purchased more and some people came in to sell shoes.

“The opening inventory was taken care of, we just had shoes chilling at the house because we’ve been selling for a while,” Belmonte said.

An extra shelf had to be added for the pre-owned shoes, a “problem” that Belmonte said is good to have.

“I’ve been selling for about four or five years,” said Gooden. “I had an Instagram page that I sold through.”

Now shoes can be found on their Instagram page @salisburykicks. The variety of merchandise does not just end at shoes, as the store also sells designer street apparel from brands such as Supreme, Babe and Chrome Hearts, a brand usually only found in Miami and Los Angeles. Through networking, the two have connections with purchasing exclusive brands from individuals who travel to acquire the shirts for retail. Additionally, the store sells pre-owned vintage apparel.

The two soon plan on having a collection of socks and hats for purchase as well.

The store features street-inspired art by Noah Merr, a Salisbury High School student whose work can also be found on Instagram @noahmerr. Faux grass also will be added to the wall at the front desk much like the rug on the floor.

Their next goal includes a storefront in Mooresville before expanding to more stores and their dream of buying, selling and trading in a mall atmosphere.

“We have a lot of big plans,” Belmonte said. “You just got to work for it. I didn’t think we would be this far this fast. I didn’t expect to have 350 pairs (of shoes) in two months. We put everything we had into this.”