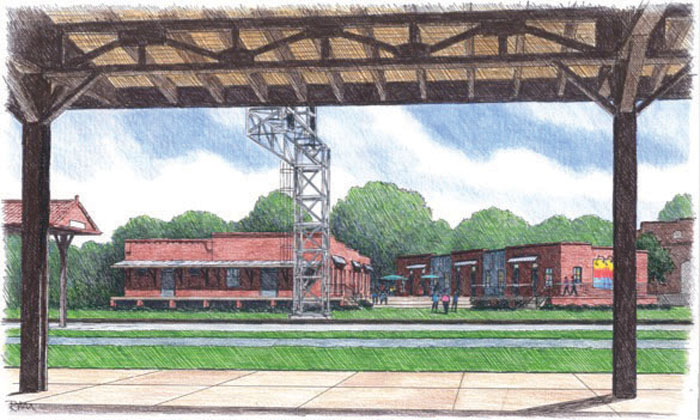 SALISBURY — A landlocked lot, an old produce warehouse and historic preservation have come together to provide a site for housing to help the homeless in Salisbury.

The memory of beloved volunteer Tippie Miller and generosity of her family figure in, too.

During a groundbreaking ceremony Wednesday for Rowan Helping Ministries’ $6 million expansion, Steve Cobb likened a tract that was donated to Historic Salisbury Foundation years ago to the items he’s collected in his attic.

“We kept it, just in case,” said Cobb, chair of the foundation’s board.

The landlocked property sits beside the railroad tracks, across from the Salisbury Station and near the back of Rowan Helping Ministries. Arnold and Kate Mills Snider gave the quarter-acre, pie-shaped lot to the foundation in 1987.

Beside it sit two buildings that look like one, both donated recently to Rowan Helping Ministries by descendants of R.B. Miller. The left side was built around 1910 as the manufacturing site for Mint Cola, Cobb said. The short-lived soft drink was a precursor to Cheerwine.

The right side, built about 20 years later, bears the faded lettering for R.B. Miller & Co. Wholesale Vegetables. Cooled with what was a state-of-the-art system, for decades it stored produce, Cobb said, “including, interestingly, bananas, which were hung by ropes in a special room in the basement.”

Unused since the 1980s, the buildings had fallen into disrepair.

“The easy route would have been to demolish the buildings and start from scratch,” Cobb said.

Instead, Historic Salisbury offered that, if Rowan Helping Ministries would preserve the buildings, the foundation would donate the adjacent lot.

It was a deal.

Chris Bradshaw, a board member for Shelter Ministries, explained the plan.

“The project includes saving the façade of both buildings,” he said. “There will be offices on the left side. The building on the right is already in the process of being demolished.”

Apartments, a laundry and offices will occupy a new first floor built in the structure’s footprint.

A new building will go up beside it, on the former Snider property, for more transitional housing apartments.

Together, the buildings are called Eagle’s Nest III, the first phase of a six-year construction plan to offering more housing options and support services to reduce homelessness.

For the Miller family, the project stirs memories and pays tribute to those who came before them.

“I had a lot of fun in there as a little girl,” said Linda Miller Price. Now it will become a beautiful building to help members of the community, she said.

Mary Catherine Miller recalled when her father took her down to his building to watch the president of the United States — probably Roosevelt, she said — come through town on the train.

And then there’s the connection to R.B. Miller’s late daughter-in-law, Tippie Miller.

A supporter of many local causes, Tippie was one of Rowan Helping Ministries’ strongest advocates and effective fundraisers.

“She would be so happy that this has happened. This is what she has wanted,” said daughter Sharon Miller.

As executive director of Rowan Helping Ministries, Grubb faces her share of challenges. A recurring thought helps spur her on, she said: “I’ve gotta channel my Tippie Miller.”