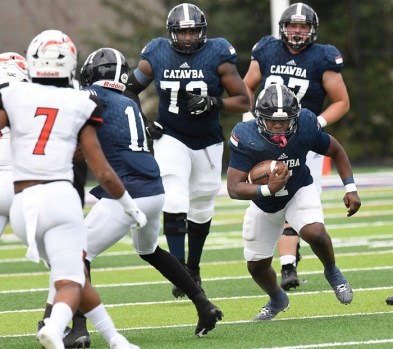 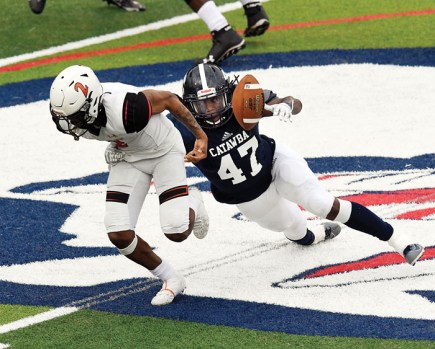 The Indians turned the ball over four times, allowed a pair of pick-6 interception returns and had a punt blocked in 50-17 South Atlantic Conference loss to visiting Tusculum. It extended their losing streak to three straight games and left them mired in the league’s Piedmont Division crawlspace.

“I have to see where the breakdowns were,” 10th-year coach Curtis Walker said at Shuford Stadium, where Catawba (1-3, 0-2) turned its home opener into a Stephen King novel. “I know we made mistakes, plenty of them. But we have kids who tried to make plays and sometimes that happens.”

For Tusculum (3-1, 1-1) — still smarting from the 12 quarterback sacks it allowed in a loss to Wingate last weekend — it was a curative victory. The Pioneers racked up 509 yards total offense, reached the end zone six times and got three field goals from kicker Juan Villasenor, a sophomore who accounted for 14 points. They cashed in on five of seven red zone advances.

“Nothing they did threw us off our game,” said winning QB Tre Simmons. “They did exactly what they showed on film. We adjusted to them and it turned out well.”

Catawba gave its Family Weekend crowd a short-lived thrill when freshman Kujuan Pryor returned a first-quarter kickoff 95 yards for a touchdown and a 7-6 advantage. It was his fourth TD of the season and second on a long kick return.

“What astonished me,” said Tusculum coach Jerry Odom, “is that we discussed not kicking it to No. 6 (Pryor) because 6 can go. That guy can fly — and we go and kick it to him. If you’re gonna do that, you better make the play.”

TU made more than enough of them to silence Catawba. Simmons passed for 156 yards and a second-period touchdown to Kemani Brown that pushed the guests ahead, 20-7. He also ran for 122 yards and another score. Teammates Ryan Dolce (72 yards) and Andrae Robinson (97) returned second-half interceptions for TD’s and Robinson, a speedy sophomore defensive back, blocked a Clayton Crile punt attempt just before halftime.

“We’ve got to go back to the drawing board,” said Catawba safety Quincy Jefferson. “We killed ourselves with mistakes. A defense can’t give up 351 yards on the ground and expect to win. From the top down, everyone needs to be better.”

That includes Indians’ quarterback Ridge Jacobs, the redshirt freshman who passed for 160 yards and a too-late-to-matter touchdown to Coastal Carolina transfer Connor McCarthy. But he also threw three costly interceptions while facing a steady diet of six-man rushes in his first collegiate start.

“The entire game they were bringing blitzes that I wasn’t ready for,” Jacobs explained after connecting on 15 of 29 pass attempts. “I had a lot of pressure in my face. The offensive line did the best they could. But here’s the thing: You can’t run the ball without passing it. And you can’t pass if you can’t run. It’s tough when you can’t do one thing or the other.”

Walker offered more insight. “We tried to settle (Jacobs) down on the sideline, to let him know he’s got to pull the ball down,” the coach said. “We can’t throw the ball in the middle of the field. We’ll continue to work with him and get him to a place where he’s doing well.”

Perhaps the game’s watershed moment came when Tusculum took the second-half kickoff and mounted a 16-play, 73-yard scoring drive that melted more than seven minutes off the clock. It stalled at the 1-yard line before Villasenor’s 19-yard field goal made it 29-10. Catawba responded with a march to the TU 31 — it included Crile’s 27-yard gain on a faked punt — only to be thwarted when Jacobs misread the defense and threw a pick-6 to Dolce.

“There’s no game in this league where you say, ‘Oh, we’ve got that one,’ ” Odom said. “We’ve gotten our behinds beat the last two times we played here. So it was important that we played a physical game, played our game. At the end of the day, it was a good win.”

And a concerning loss for Catawba.

“It’s like a scent hovering in the air,” Jacobs said afterward. “We all need to have a short memory. Changes have to be made so we’re gonna find out who really wants to play.”

NOTES: Simmons’ touchdown pass was his eighth of the season. … Pryor entered the game ranked first in the SAC and third in the country in kickoff returns, averaging 40.2 yards per runback. He averaged 29.7 yesterday. … Crile tied the Catawba school record with a 53-yard field goal in the second quarter. It matched the mark held by Tom Sexton since 1977. … Linebacker Mekayle Burris had eight tackles and a sack before suffering a last-minute injury. East Rowan graduate Christian Bennett had six tackles. … The Indians travel to southwest Virginia for a conference game at Emory & Henry next Saturday afternoon.