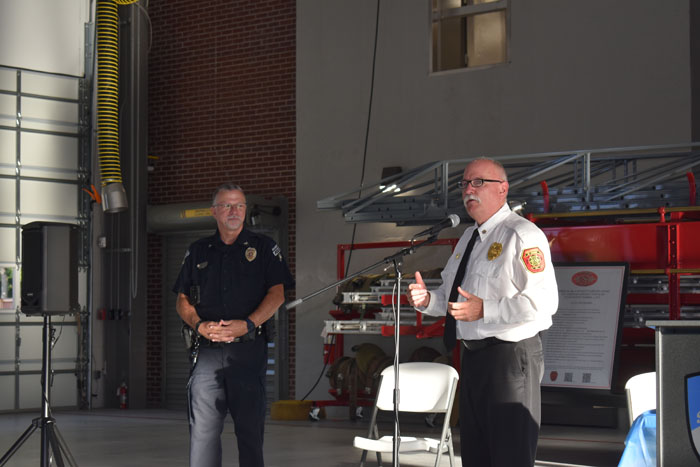 SALISBURY — In the third of four “Cultivating Community Conversations” between police and residents, one attendee helped make the evening more than worthwhile.

The event was held at Fire Station No. 6 on Cedar Springs Road, the newest of the fire houses, and Fire Chief Bob Parnell welcomed guests and offered a tour of the facility to anyone interested after the meeting.

Dennis said the event was “for and about” the residents of the community, noting “the only way to bring the temperature down is to communicate, to respect each other’s opinions.”

Alexander asked those in attendance to “give us the good, the bad and the ugly so we can better serve you.”

About a dozen residents attended, and the location was chosen to try to work on building the relationship with the Hispanic community, said Stokes.

“There has been tremendous growth in the Hispanic community in Salisbury in recent years, and it’s important that we recognize that and work to build a better relationship,” he said. “Not just that, but we need to recruit from your community. We have a limited number of Spanish speaking officers and we need to grow that number.”

Assistant Chief Brian Stallings offered the microphone to anyone who wanted to speak.

“We moved to Salisbury in 1999,” said Gerardo Villanueva, who responded to the call to speak. “We have seen a lot of changes. This fire department was not here, it was deers and squirrels,” he laughed.

“I am not here with questions tonight, I am here to get information for my community,” he added. “We are not afraid of the police, we know they are our friends.”

He said the biggest problem for the Hispanic community is the language barrier.

“They are not attending a meeting like this because they are afraid of being laughed at for not understanding,” he said.

When Post asked what the largest concern is for the Hispanic community, Villanueva reiterated that it is the language.

“We have people who have an emergency who are so worried that the people at 911 will not be able to understand them that instead of calling, in an emergency, they just live with it,” he said.

“Then this is a good thing to have come up,” said Stokes. “Because even though 911 is a county thing, I can tell you that they are able, if they realize the caller is not speaking English, to get a translator connected on the line, and it’s not limited to Spanish. So please, let your community know that is not a problem any more.”

Little added that the city is aware that limited proficiency in English is “a huge barrier for many people, but the city is committed to work to make sure you have access to all city services whatever your language.”

Others in attendance commended police on increased activity in and attention to the West End.

“Seeing the ‘steady blue’ out and about in high crime areas has made a difference,” said advisory board member Gemale Black. “I believe in giving credit where credit is due, and they are showing up.”

Black said he believes the adage “if you see something, say something,” and hopes it is something the community is learning to practice.

Stokes said he would take that one step further.

“Getting a tip is good, it does help,” he said. “But it won’t get us an arrest. When you are willing to put your name on it, to stand behind your statement and be a witness, then it can lead to an arrest, the courts will let us act on that. A tip is good, don’t get me wrong, it can lead to information and help get us in the right direction, but we can’t make an arrest on a tip. So I would ask that you be willing to put your name on it, stand behind what you know is right and help us hold people accountable.”