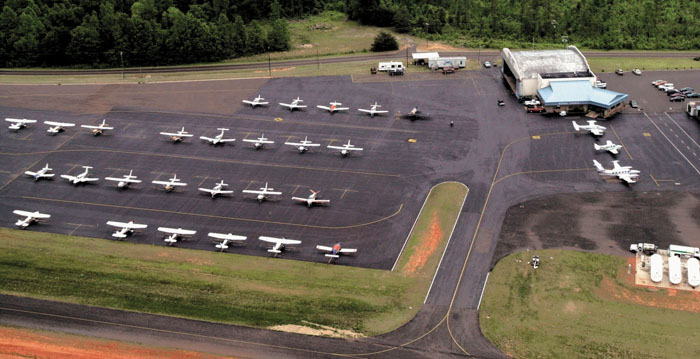 Rowan County will now have jurisdiction over the airport. Salisbury Post file photo

SALISBURY — County commissioners Monday night planned ahead for cooperation that came Tuesday night from the Salisbury City Council in taking possession of parcels that house the Mid-Carolina Airport and the National Guard facility.

Both have been inside the city’s Extraterritorial Jurisdiction (ETJ), and in years past, who would claim the property was a bone of contention. In 2013, the N.C. state legislature approved the de-annexation of the parcels from the city limits, but it did not remove it from the city’s ETJ.

Through the years, both the board and the council have come to an agreement that it makes the most sense for the city to allow the county to carry forward.

At Monday’s meeting, the commissioners discussed rezoning of part of the parcels once the city relinquished it, noting that any and all city ordinances and regulations would remain in place until the county took over or for 60 days, whichever came first.

The goal is to support the growth and expansion of airport-related industry and to increase runways and approaches, according to FAA regulations. The industrial district would be to encourage businesses that specifically support the airport or are already connected to the air industry, including possible increase in housing for NC highway patrol helicopters. Included in the list of possible additions or places for growth were corporate hangars, National Guard facility, proposed terminal, apron expansions, T hangars, and a taxi runway.