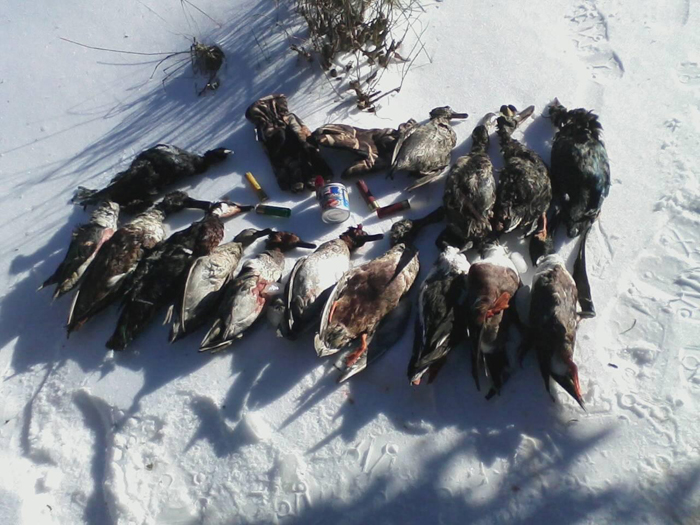 My second January trip to Mattamuskeet (I am pleased to say that a visit to the North Carolina coast has now become an annual tradition for my crew) was nearly life-changing, if involuntary transgender surgery qualifies as such…

The first morning of the two-day hunt on a private impoundment went very well as we had steady flights of ducks incoming most of the morning. Before dawn, we had filed into the sturdy but narrow blind, myself entering first since I am left-handed (not naturally; baseball accident) and would more safely occupy the far right corner of the structure. The brush was just a little high for me, but I managed to part the branches to afford a reasonable swing. With us was our guide Landa’s very energetic year-old black Lab bitch, Bear. She showed great promise in difficult retrieves, but she was just a little behind in blind-sharing etiquette, first gulping down half a sausage biscuit I left on the bench and shortly thereafter peeing on my wader boots. My buddy the DC, who always stocks several in both blind and golf bags, offered me a can of Vienna sausage, which I gladly accepted.

Now after a couple of hours and several cups of coffee, the time came to relieve myself during a lull in the action. I really didn’t want everyone to have to exit the blind to let me out, but the walls of the blind were way too high for me to attempt to arc the stream over them, even standing on the bench. I spied the empty sausage can and figured out that, with patience, I could fill it up a few times and dump it overboard. It certainly seemed a reasonable expedient. However, I failed to consider the possibility that Vienna sausage might be Bear’s favorite food group! I turned into the corner in the interest of modesty and fired. Suddenly, she spied the open can and bulled her way to my end of the blind, running right down the bench and scattering blind bags. I suppose that, to a young dog, human wedding tackle may actually appear a reasonable facsimile for that particular delicacy. She was in an instant right on top of me, gleefully snapping at the little fireman. Only a quick collar grab by my buddy spared me from what would have been—at least– an annoyingly truncated morning hunt to get stitches and at worst an eventual trip to the DMV to change the gender on my driver’s license to “NA.” Could I even have bled out and perished if the shooting had suddenly picked up? I don’t think either of my buddies would have wanted to pull out when covered with greenheads!

After a break, we went out for the afternoon and collected a few more ducks and then rode back to the guide’s house at dusk in driving rain in the back of an open pickup. Every bit of gear we had was still soaking wet the following morning, when it turned out that the shooting wasn’t quite as good as the previous day. We decided to forgo the afternoon shoot and head back home. I kept that Vienna sausage can—well rinsed, of course—just to remind me that I’m not always unlucky! When I got home to a snow-covered lawn, I decided to arrange the ducks we had collected (I seem to be the only one who really likes to eat them) in a shot I call “Still Life with Spent Hulls, Wet Gloves, and Vienna Sausage Can.” I never really told my wife why I kept the can, simply responding when prodded something like “for sentimental reasons.”

My wife Sonia, who came back to hunting after a 28-year hiatus, was eager to try a guided duck hunt after hearing many anecdotes, so we drove over to Engelhard recently on yet another rapid deployment of some 34 hours to the coast and back to try a Wednesday during the last week of the season. Things had been fairly slow, but the late afternoons had been somewhat productive, we were told.

We quietly skirted the impoundment 30 minutes before dawn and took our place in the same blind I had used several years before. Landa’s son had recruited Bear—now presumably older and wiser—to come along. At first light a small flock of woodies flew too close, and my wife knocked down a nice hen, which Bear pursued with great vigor and proudly deposited at our feet. As the morning wore on, we enjoyed watching the tundra swans passing over, but there were very few ducks in the air, so we decided to spend the midday visiting the Mattamuskeet National Wildlife Refuge and getting some lunch at the Feed House. As we loaded up to return to the house, Sonia asked where to put the lone duck. She eyed the dog distrustfully and wondered if she should bring it along in the cab, but I told her with great confidence to put it in the truck bed with our other gear.

When we got to the house and I went around to the back of the truck to get our guns and our woodie, I saw that the entire bed and Bear’s face were covered with down and that the duck was now a bloody, feathered shell with only a head, feet, wings, and a gizzard. Apparently, Bear is picky about wolfing down grit. She spent the afternoon in time out…