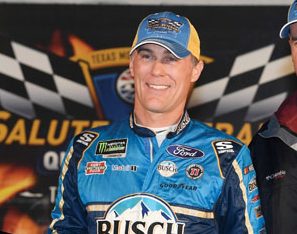 Kevin Harvick is on the verge of elimination just one round into the playoffs heading into the race at Bristol. (AP File Photo/Larry Papke)

Kevin Harvick snapped a long losing streak with back-to-back wins that threw him into the thick of NASCAR’s championship hunt.

Harvick is now on the verge of elimination just one round into the playoffs. The 16-driver playoff field will be cut by four Saturday night at Bristol Motor Speedway and Harvick goes into the race ranked last among the contenders.

He’s had a terrible stretch the last three races, starting with a crash in the regular-season finale at Daytona. Harvick’s car then caught fire in the playoff opener at Darlington and he crashed at Kansas for the first three consecutive DNF’s in Harvick’s two-plus decade career.

Harvick pretty much needs a win Saturday night to avoid elimination. Also below the cutline headed into Bristol are Kyle Busch, Austin Dillon and Chase Briscoe. Harvick and Briscoe both drive Fords for Stewart-Haas Racing.

Harvick said the No. 4 team can race hard because “we don’t have anything to lose.”

NASCAR’s new Next Gen car raced at Bristol in the spring but it was when the concrete surface was covered in dirt. Busch grabbed his only Cup Series victory of the year, a win he inherited from third place when leaders Tyler Reddick and Briscoe crashed racing for the checkered flag.

Now the Tennessee track will be its usual concrete-covered 0.533-mile bullring and a completely different experience than it was as a dirt track.

“We’ve realized there are a number of unknowns that come with the car and things that you don’t think about unless you race,” Harvick said of the season-long adjustment teams are making with the Next Gen. “There’s just really no rhyme or reason to things that have happened this year. You just have to be really open-minded to adjust and adapt quickly to whatever happens.”

Briscoe said he’s done two sessions on the simulator to try to prepare for the conditions.

The first two playoff races this year have been won by Erik Jones and Bubba Wallace, neither of whom is part of the playoff field. A victory by a playoff driver earns an automatic berth into the next round, so Christopher Bell, based on points, is the only driver who has already advanced.

Austin Dillon heads to Bristol looking to continue a hot summer streak that has elevated his status in the industry.

Dillon won the regular-season finale to steal the final playoff berth and put both of Richard Childress Racing’s cars into the 16-driver field. Behind the scenes, he was pushing his grandfather to bring Kyle Busch to the organization.

Tyler Reddick stunned RCR in July when he said he was moving to 23XI Racing in 2024. His early notice gave team owner Childress a full year to find a replacement, and his 32-year-old grandson suggested he try to get Busch.

RCR this week announced that it had signed the two-time champion away from Joe Gibbs Racing for 2023 and Busch will drive Reddick’s No. 8 Chevrolet with Reddick’s crew chief. The signing has electrified RCR, a storied organization that last won a Cup title in 1994 with the late Dale Earnhardt.

Before he could put Busch in front of Childress, Dillon had to address the 2011 fight between car owner and driver in the Truck Series garage at Kansas Speedway. Childress infamously said “hold my watch” as he removed his timepiece before a physical altercation with Busch that earned Childress a $150,000 fine from NASCAR.

“I talked to him about it, and he was open to it. I think he was more like, ‘Do you think he’d want to come?’ because of the past,” Dillon recalled. “I was like, ‘Kyle’s a man, just like you are. Forgive and forget and move on.’”

The conversation was the similar the first time Dillon approached Busch.

“He was kind of in the same boat of, ‘RC wants me?’” said Dillon. “I was like, ‘Yeah, man, why wouldn’t he? Two-time champion. Great winner in this sport.’ I just told him we wanted him and that’s where it started.”

Bringing the two sides together is a huge business move for Dillon, who has always had to overcome the “silver spoon” reputation that comes with driving for his grandfather. He said he’s always appreciated Busch for once offering him a job — the only person besides his grandfather to do so.

There were plenty of rumors surrounding Kyle Busch’s future and the longer he went without a contract for 2023, the louder some of the scenarios.

Alex Bowman was often part of the conversation and mentioned as a driver who could lose his job at Hendrick Motorsports if the team decided to keep Busch. Hendrick developed Busch before releasing him at the end of 2007 to sign Dale Earnhardt Jr.

“That’s just part of the rumor mill and it’s Kyle Busch and he’s arguably one of the greats, a super talented race car driver, who wouldn’t want him?” Bowman said.

Bowman, who is also looking for a new crew chief for next season because Grev Ives is getting off the road, said he never worried about the Busch rumors because he’s comfortable with where he stands at Hendrick. He’s in his second full season as sponsor Ally’s hand-picked replacement for Jimmie Johnson in the No. 48.

Even though Bowman has just one win this season, he heads into Bristol ranked sixth in the standings and in strong position to advance into the second round.

Denny Hamlin is the favorite to win Bristol, per FanDuel Sportsbook…. Kyle Larson is the defending race winner. He beat Kevin Harvick by 0.227 seconds last season. … Kyle Busch leads all NASCAR Cup Series active drivers in wins at Bristol with nine, which includes his spring victory on the dirt. NASCAR Hall of Famer Darrell Waltrip holds the record with 12 victories, including eight straight.

CHARLOTTE — Denny Hamlin said Kurt Busch is under no pressure to hurry up his recovery from a concussion and that 23XI Racing is not pushing at this time to get Tyler Reddick in its cars a year early.

Richard Childress Racing had a full-throttle response to Reddick’s planned move to 23XI, the Toyota team owned by Hamlin and Michael Jordan. Childress, blindsided by Reddick and furious, steadied his organization this week by snatching Kyle Busch, the crown jewel of Toyota’s fleet.

Not only did Childress sign the free agent of the decade, but he signed him to drive the No. 8 Chevrolet — Reddick’s car.

Reddick, it seems, can drive some other Chevrolet that doesn’t yet exist as he rides out the final year of his RCR contract. Reddick told Childress in July he was moving to 23XI Racing in 2024.

Hamlin on Thursday applauded Childress’ recovery in landing Busch, the Cup Series’ only active multiple champion and winningest Toyota driver in all three NASCAR national series. Busch and Hamlin have been teammates at Joe Gibbs Racing since Busch moved there in 2008.

“Our announcement with Reddick, if you want me to take this from a fan perspective, it would be that RCR was caught off guard by it, understandably so, and this was their answer to that,” Hamlin said.

“More than likely they got together and said, ‘Well how are we going to respond?’ Well, the way they responded was to get a 60-time winner and two-time champion to fill that seat. They probably got with their manufacturers and said, ‘How can we make this happen?’ and they responded, and I think they responded well.”

The problem is that Childress seems determined to hold Reddick through the end of his 2023 deal, only now he’s moving him to a third car. Childress said he’d get a charter for the third Chevrolet but didn’t say who was selling, and the buying price is north of $20 million right now.

23XI wasn’t in a rush to get Reddick in the organization because Kurt Busch is under contract through 2023, and Hamlin said there’s even an option on Busch for 2024. But Busch has been sidelined since July with a concussion and there’s been speculation the 44-year-old champion will retire.

Hamlin said 23XI still plans for Reddick to join the organization in 2024, and there is no pressure on Busch to get back in his car. Bubba Wallace is currently driving Busch’s No. 45 Toyota and won last week at Kansas; Ty Gibbs is in Wallace’s No. 23 Toyota.

“We still feel like Kurt is going to run next year, if he doesn’t, we’ve already got contingency plans for the 45 car,” he said. “If (Reddick) was pushed to the side, I think we would take him. But I don’t know that we need to get into pushing to get him early.

“Tyler has really said, and I believe it, that he wants to live out his contract at RCR. Mostly he wanted to do it for his team and his guys. With him being taken out of the (No.) 8 car, I don’t know if that changes, but I know Tyler wanted to end what he started there.”

The Series next races Saturday night at Bristol Motor Speedway in Tennessee in the first elimination race of the playoffs. Hamlin is the FanDuel favorite to win the race, while Kyle Busch picked up his only Cup win of the year at Bristol in the spring when the concrete surface was covered in dirt.

Four drivers will be cut from the 16-driver field after Bristol, and Kyle Busch is below the cutline at 13th in the standings. Also in danger of elimination are Austin Dillon, Chase Briscoe and Kevin Harvick.