Submitted: Option one (left) and two (right) for a mural that was proposed to be put on the shelter in Granite Lake Park. 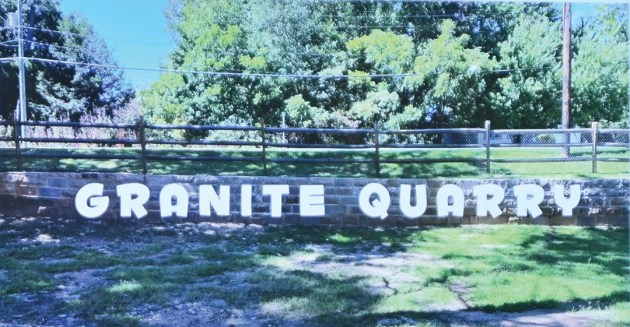 Submitted: Option three for a mural in Granite Quarry.

GRANITE QUARRY — This year, original works of art displaying the pride of a municipality have been popular additions to local towns across the county, and Granite Quarry is next in line, with the plans to add an art design to Granite Lake Park.

Mayor Brittany Barnhardt presented three design choices to the board of aldermen Monday night that are intended to capture the spirit of Granite Quarry. Option one would put the G.Q. initials in white outline on the side of the shelter at Granite Lake Park. The G was a rich blue while the Q was the color of green that matched the grass on the town seal that depicts the Old Stone House.

The second option was similar to the first and would also be put on the side wall, but instead the design had both letters in blue with a patch of dirt over the G.Q. and a tree sprouting above it. Due to the rough and uneven texture of the bricks, the designs would need to be painted on separate canvases and mounted to the wall for an even display of the design.

The third option, which Barnhardt acknowledged was her original vision, consists of the name Granite Quarry, spelled out in white letters, on the retaining wall next to U.S. 52, facing the lake in Granite Lake Park. The letters can be mounted by either U-brackets at the top of each, or mounted directly to the facing of the granite wall.

“These are both sort of highlighting our stone, solid as a rock in both because they’re both being mounted up against stone fixtures,” Barnhardt said.

The letters would be 36 inches tall and made of aluminum that is sandblasted white.

Alderman Jim Costantino favored the second design on the side of the shelter, saying it will be more visible, and he liked the addition of the tree. He said he would like to see a mural of that design in every park and to have the town find a wall that was big enough to put a large mural.

“I like this concept also, but we need to do a big one,” Costantino said.

Alderman Doug Shelton also favored the second design, but hoped it might be a kick-off for a mural program by the town.

“If we can’t find a big enough wall for a good-sized mural, we can start finding walls that we can maybe put a number of smaller murals on and have them in various parts of town, maybe to recognize parts of the town,” he said.

The third design could possibly turn into a community-made art piece by having individuals paint each of the letters. For this, Barnhardt suggested having the letters painted elsewhere before they are mounted, so paint does not get on the wall.

The idea overall is still in planning stages, and other locations are still being considered.

Shelton liked the idea of the third option becoming a community art project, but said he would prefer it in a more visible area than just the park.

“I would like to see this be the start of an ongoing process,” he said. He likened the potential project to the pig statues found all across Lexington in a project initiated years ago called “Pigs in the City.” In that project, businesses or individuals purchased one of the pig statues and was responsible for having it decorated to reflect their businesses or message. Uptown Lexington came up with the project after seeing the same project happen in New York with cows. Lexington, long known for its barbecue and the Barbecue Festival, knew pigs were the perfect animal for the city. The statues remain scattered around the uptown area. If Granite Quarry could start a themed-project, it could provide a similar distinct branding to the town.

More options will be presented at the board’s Oct, 10 meeting.

In other business discussed:

• The board unanimously approved replacing Clyde L. Adams’ name on the side of the police department. The building is the Clyde Adams Law Enforcement Center, named after the late police chief of Granite Quarry. The lettering was originally taken down during the remodeling of the building, but it has yet to be put back up.

Linker proposed putting the name above the police department lettering since Clyde Adams’ wife, Carolyn Adams, has documentation of a proclamation stating that the department would be named Clyde Adams Law Enforcement Center. A plaque in the lobby also has the full name of the department.

• Granite Quarry has hired a new town planner, Jay Dale, who is also from Enfocus as was the previous planner, Bill Bailey.

• The town is currently looking to fill a vacant spot on the board of aldermen. Applications can be found at granitequarrync.gov or at the town hall and must be submitted by Sept. 30.