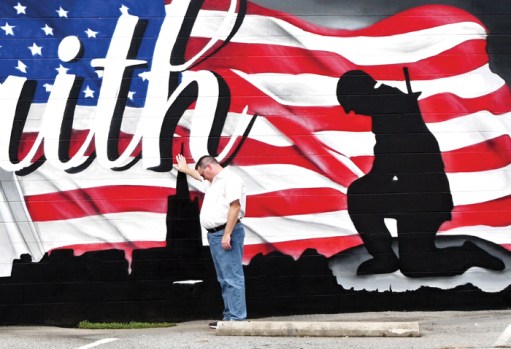 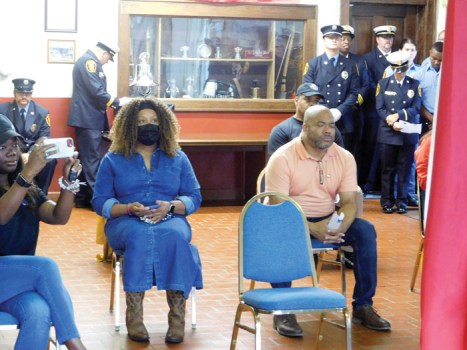 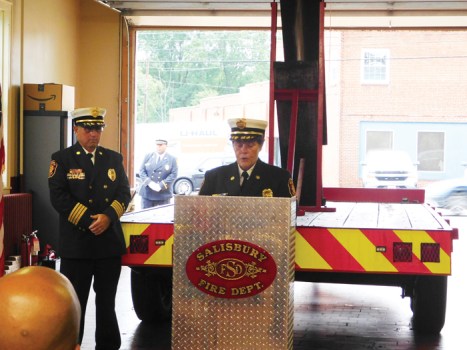 By Elisabeth Strillacci and Madeline Wagoner

Sunday dawned rainy, gray and overcast, an ideal reflection of the day that even 21 years later, haunts the collective memory of America.

Members of Salisbury Fire Department, several city council members, representatives from across the community gathered, though in smaller numbers than in years past, at the firefighters memorial outside Fire Station No. 5 on South Main Street in Sunday morning’s light rain.

Those in attendance were welcomed by Chief David Morris before the department’s honor guard came forward to lower the flag in the center of the memorial to half staff. Chaplain Dan Peters offered the invocation, asking for protection for “those who have answered the call” to protect others.

At 8:50 a.m., one bell strike was sounded for when the first plane hit Tower One (the north tower) of the World Trade Center in New York on Sept. 11, 2001. The sound of the bell echoed through the high-ceilinged, open room. At 9:04 a.m., three more individual bell rings sounded out for the planes striking Tower Two (the south tower) of World Trade Center, the Pentagon, and a field in Shanksville, Pennsylvania.

An explanation of the bell ceremony was read by Chief Chris Kepley, now retired, at Sunday’s service reads:

“The fire service of today is ever-changing, but it is steeped in traditions 200 years old. One such tradition is the sound of a bell.

In the past, as firefighters began their tour of duty it was the bell that signaled the beginning of that day’s shift. Throughout the day and night, each alarm was sounded by the bell, which summoned these brave souls to fight fires and to place their lives in jeopardy for the good of their fellow citizens.

And when the fire was out, and the alarm had come to an end, it was the bell that signaled to all the completion of that call.

When a firefighter had died in the line of duty, paying the supreme sacrifice, it was the mournful toll of the bell that solemnly announced a comrade’s passing.

We utilize these traditions as symbols, which reflect honor and respect on those who have given so much and who have served so well. To symbolize the devotion that these brave souls had for their duty, a special signal of three sets of dice bell rings represents the end of our comrade’s duties and that they will be returning to quarters. And so, to those who have selflessly given their lives for the good of their fellow man, their tasks completed, their duties well done, to our comrades, their last alarm.

They are going home.”

The sound of taps followed, then there were two last rings of the bell — one at 10 a.m. when the North Tower fell, and a last one at 10:30 for the falling of the South Tower.

“I was in a classroom that morning,” said Tangela Morgan, who attended the memorial event. “I remember when the second plane hit, it changed everything.”

“Days like this just make me very grateful for what all of you do to protect all of us,” Morgan said to Kepley. “Thank you, for what you do.”

In addition to the ceremony in Salisbury, the town of Faith held a dedication ceremony Sunday afternoon for the new mural by Abstract Dissent’s Shane Pierce. In the service, homage was paid to the founders and rock cutters who built the town and to those who have in the past or who currently serve in the United States military.

“Although today we’re going to dedicate this mural, it is also a patriotic day to remember 9/11,” said Jayne Lingle of the board of aldermen. “It is a time that our nation under God came together showing the world that we are resilient and will continue to fight for our democracy.”

A moment of silence followed for those who died on Sept. 11, 2001, in addition to the first responders who were in danger that day and to those who continue to live with the aftermath.

“We’ve been asked if we could fill the trenches and creeks in Faith,” said Mayor Randall Barger. “But those were made when veterans from Germany came back to our country and described the landscape of what they saw. These are a memorial.”

He also recognized Faith local James Bill, a veteran who will be turning 100 on Nov. 19.

The ceremony concluded with a blessing of the mural by Pastors Allen Hess, Rob Crawford and Stephen DeWalt.