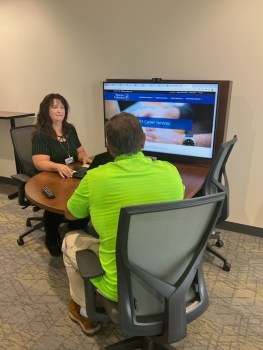 Photo submitted — A student being helped in the R3 Career Center.

SALISBURY —When Hitachi Metals, a manufacturer with a long-running facility in Rowan County, announced the plant would close and lay off more than 80 people in July the community college stepped in to help.

Rowan-Cabarrus Community College’s R3 Career Center is no stranger to helping people who have just been hit with layoffs or are expecting them soon.

She credited Hitachi for building a good relationship with the college and working with RCCC in advance.

She said the company opened its doors to the college so the center team could go there and work directly with workers.

She said the center’s goal is “building relationships with employees, learning a little bit about what they need and navigating them toward success.”

Craig Lamb, vice president of corporate and continuing education, said in the current local economy the college mostly sees new employers, facilities and jobs, but there is always turnover in a healthy economy as well.

He said these kind of changes are a natural part of the economy, but they impact people’s lives and the college takes it upon itself to help people land on their feet.

That can take a few forms. Folks may want to find a similar job or make a change to their careers that may involve further education. The college will help guide them to getting where they want.

R3 has been around since 2003, when the Cannon Mills closure saw a wave of mass layoffs. The center also works with individuals.

The college has already made contact with almost all of the employees at Hitachi Metals and most of them have been registered with the college’s career lab. Almost half have asked the center to help them with their next career move.

The career lab helps with services like resume building and career counseling. Many of the employees at Hitachi have worked there for so long they do not have current resumes.

Allman said sometimes the center has to help people realize they have more skills than they know. She said many people claim to be uncomfortable working with computers, but because the pandemic has forced more people to use electronics they may have closed that gap without noticing.

“They just haven’t tapped into it,” Allman said, adding the college can make it easier for the worker to move into the classroom and earn new certifications to give them more options.

“There’s a lot of opportunity out there for them,” Allman said. “There are a lot of eager employees out there looking for great employees.”