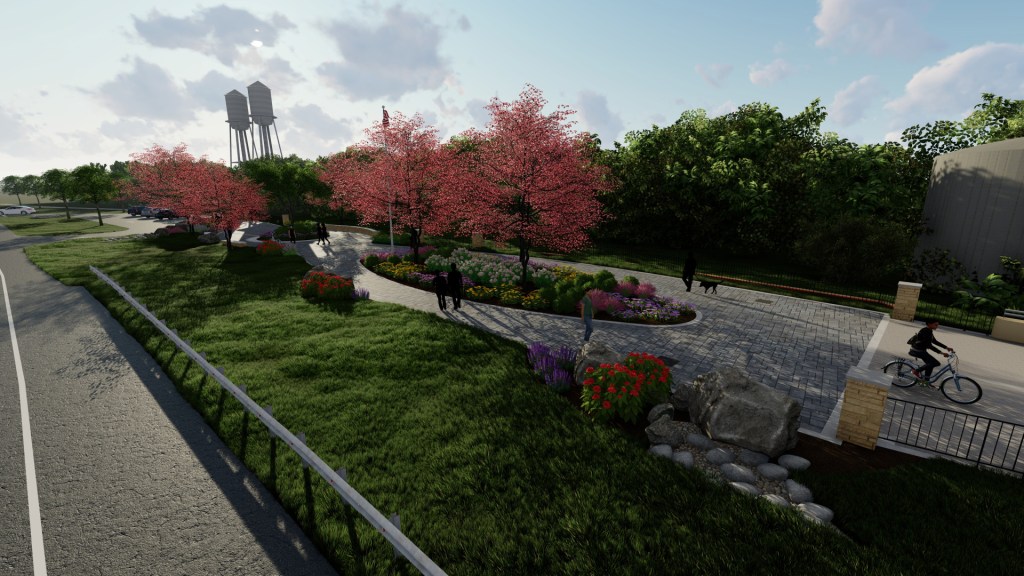 Submtited rendering - A view of what Spencer's Yadkin River Trailhead should look like. The project is expected to take about 150 days to complete.

SPENCER — A rendering of Spencer’s trail project shows a connection directly to the historic Wil-Cox bridge.

The Yadkin River effectively divides Rowan and Davidson counties, and the trailhead will connect Davidson’s park developments to Spencer’s own trails.

The Davidson side has water access, trails, picnic tables, a historic site and the fresh path across the bridge with more expected to come, but the Rowan County side of the bridge has remained empty for years. Now the Town of Spencer is getting ready to change that with its own project.

Spencer Town Manager Peter Franzese said, as of Thursday morning, the town has an easement for the bridge that will allow it to make the connection directly to the bridge, and the town is expecting additional funding to be available at the next board meeting.

Benesch, the firm that designed the trailhead, finished a new rendering Thursday afternoon that shows the trailhead-to-be in greater detail than previously released technical drawings.

The town gave the go ahead on the project and awarded a contract in August. Franzese said a construction start date has not been decided yet, but he is anticipating the board amending the project budget during its September meeting with the expectation of receiving more funding.

So far the town has funded the project primarily through donation. The town is about $200,000 short of the $754,000 price tag that would allow the town to build with no compromises on the plans.

Franzese said then the town will be able to execute the contract and plan a pre-construction meeting with the Hall Contracting. The project is expected to take about 150 days to build.

The park was originally planned in two phases, but as funding began rolling in from organizations like Friends of Rowan and Carolina Thread Trail, Special Projects Planner Joe Morris advised working to complete the entire project at once.

Board members have described the project as complementary to the park development on the other side of the river and the project will play into the town’s vision of trails that connect through to Salisbury.

The town is also planning a downtown park on the corner of Park Plaza and has advised the North Carolina Department of Transportation to rework the striping on a long section of Salisbury Avenue to make the town’s main thoroughfare more bicycle and pedestrian friendly.