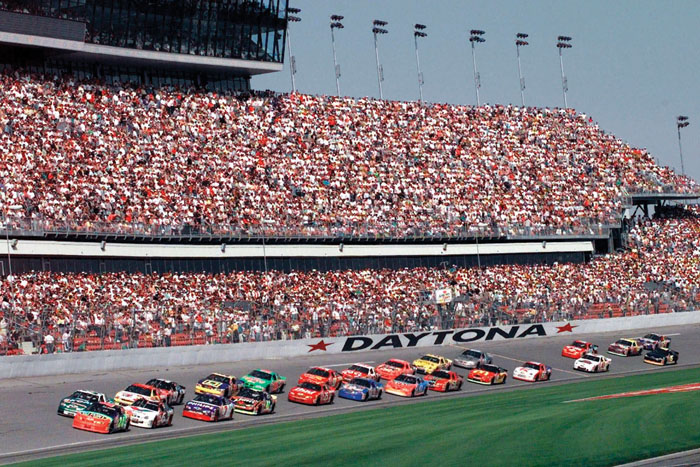 “I’m speechless, man,” Clements said near the start-finish line. “I don’t even know what to say.”

His win came after two multicar melees in overtime and gave Clements an automatic — and unexpected — berth in the postseason.

“We have nothing to lose, man,” he said. “We’re going to give these big teams all they can stand.”

Clements passed sluggish Austin Hill on the final restart thanks to a big push from Sage Karam and cruised to the checkered flag. Hill looked poised to sweep both Xfinity races at Daytona, but his car seemed to have fuel and electrical issues during the final caution.

When the green flag dropped, Hill did, too. Clements and Karam flew by on the outside.

Clements’ first win in 164 races was about being in the right place at the right time. He avoided four big ones in the closing laps. The first involved seven cars with nine laps to go in regulation. The second included eight cars with three to go. The third and biggest of the night came in overtime, with Hill and Noah Gragson just ahead of a 13-car cluster.

Gragson started the fourth one when Clements and Allmendinger pushed him at nearly 190 mph. Gragson slammed into the outside wall and then got spun helicopter style when broadsided by Landon Cassill. When the dust settled, eight more cars were involved.

The grand total: 36 cars involved, some of them several times.

Allmendinger looked like he would challenge Hill and Clements during the final two-lap shootout, but he ran out of fuel just before the final restart and had to pit.

“We survived that big wreck somehow,” Clements said. “I thought if we can just keep up with these guys, it will be a good day. Top five and bring this car home in one piece and that’s a good day.”

It ended up being much better, a playoff-clinching performance.

“Wow, this is incredible,” he said before thanking the fans who stuck around following a three-hour rain delay. “Now let’s go drink a beer.”

Riley Herbst was running fourth early in the final stage when he lost control because of a flat right rear tire. Herbst’s No. 98 Ford slid through the backstretch grass, bringing out a caution and going a lap down.

It was a bad break for the driver who started the day eighth in points and was looking to make up ground with four races to go before the playoffs.

Herbst rallied to finish 15th and found company in the unlucky club.

Sheldon Creed, vying to make the postseason, was involved in a multicar accident on lap 83 and knocked out of the race. John Hunter Nemechek got sideways in the middle of a three-wide pack and turned into Creed, who ended up sliding back across the track and got T-boned by Joe Graf Jr.

The series moves to Darlington Raceway next Saturday. Justin Allgaier won there in May in the No. 7 Chevrolet for JR Motorsports.

NASCAR Cup race at Daytona rained out, moved to Sunday

The NASCAR Cup Series race at Daytona International Speedway was rained out Saturday night and rescheduled for Sunday.

The 400-mile race, the regular-season finale that will decide the last two playoff spots, will now begin at 10 a.m. EDT. It will air on CNBC. Weather forecasts call for 40% chance in the morning, increasing to 70% in the afternoon.

Fifteen drivers remain in the hunt for the postseason. Two spots are still open, although one of them will go to Ryan Blaney or Martin Truex Jr.

This will be the third summer race at Daytona in recent years delayed a day. Events in 2014 and 2019 were postponed because of weather.

NASCAR officials moved the Daytona summer race from July to August in 2020 partly in hopes of avoid summer thunderstorms. The Xfinity race that started Friday night was delayed three hours before Jeremy Clements managed to avoid four late multicar crashed and reach victory lane for the first time since 2017 and second time in 421 races.