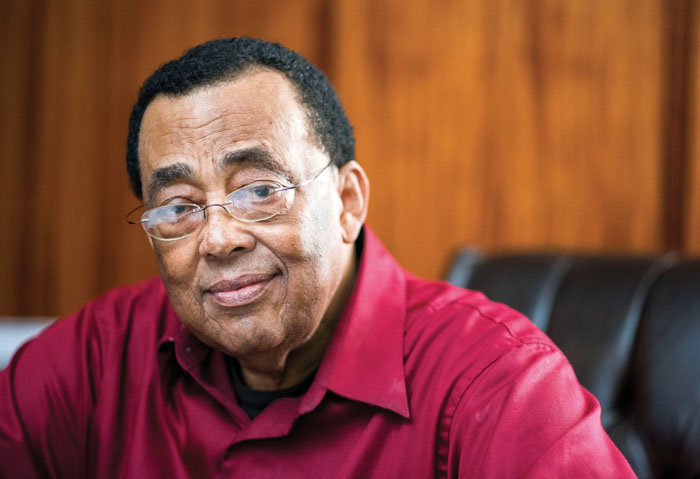 EAST SPENCER — Alderman John Noble seems to have a permanent hint of a smile no matter what he is doing, meaning everyone who approaches him feels welcome from the start.

That may be a part of the secret that has kept getting him elected time and again as an alderman in his home town. It may also be the years of experience, both as a board member and former mayor pro tem and from his work in the public safety sector. Or perhaps it is because he knows, he says, “just about everybody in town by now.”

Whatever the reason, Noble is in his 41st year of service as an alderman, and is now the longest serving board member in town, and in fact, is either the longest serving or one of two longest serving members of town councils/aldermen in the county. At press time, the Post was waiting for confirmation from the Rowan County Board of Elections on whether Noble holds the single honor or has to share the throne.

Noble has had a storied and historic career, both professionally and politically, and has wound his way forward from being the “new guy” who learned from others to the one everyone looks to for information and guidance.

Michael Douglas, who this summer went from being town administrator to town manager as East Spencer adopted the new form of government, is still fairly new to the job and the town, and noted he does lean on Noble’s years of knowledge.

“He is one of the most knowledgeable persons in town,” said Douglas. “With over 40 years of institutional knowledge, I know I can count on him to give me the historical background on any issue that arises.”

“A lot of things have changed in the years I’ve served,” said Noble at a recent Community Day event where he was celebrated for his long service. “We used to be able to talk about things and find some way to agree. These days, it’s harder to get that. But I still say what I think about something, put my two cents in, and then we see where it goes.”

Noble started out as a firefighter, but it was not long before he went from turnout gear to a uniform and badge, becoming one of the first Black deputies hired by Rowan County Sheriff’s Office. He spent 46 years with the department, retiring as a lieutenant in the court division. During his tenure, he earned a degree in criminal justice from Shaw University.

He first ran for office in 1981 and to his surprise, he won. And kept right on winning, even serving as mayor pro tem for three terms.

Noble has been a lifelong member of Shady Grove Baptist Church. He’s attended the church since was 8 and was baptized there. Noble attended what was formerly Dunbar High School.

Noble grew up in East Spencer in a time when “you couldn’t get away with things, because even if your parents didn’t see you do something, somebody else’s mama did, and she’d be on the phone with your mom before you even got home,” he said. People were not shy about getting involved with other people’s kids, he said. Adults in the neighborhood watched out for “all of us, and that meant if we did something, they did not hesitate to, well, you know, correct us,” he said, laughing.

Some things still frustrate him, he said. He wishes more in the community would attend board meetings, hear about things going on and voice their opinions. But he also acknowledges the community remains close knit for the most part. And he is happy to still be contributing, still giving back.