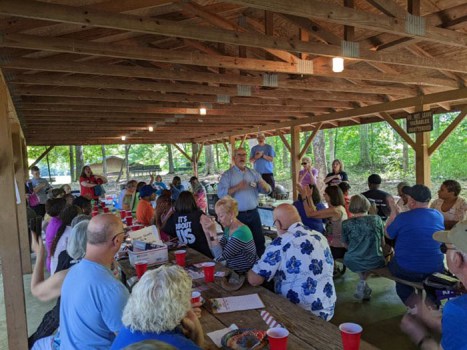 Chairman of the Rowan County Democrats Geoff Hoy speaks to those gathered for some games, food and even a few campaign speeches at Sloan Park in Mt. Ulla last weekend. Submitted photo 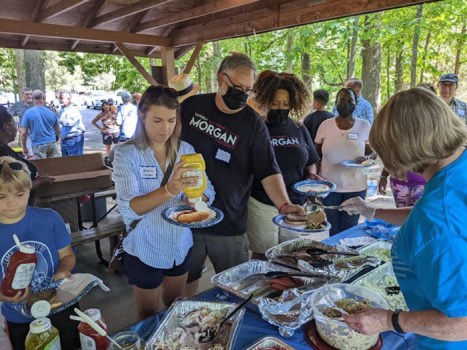 Tangela Morgan, one of the candidates for state Senate, enjoyed partaking of the picnic lunch at the annual Fun Fest put on by Rowan County Democrats. Submitted photo

Amidst the sounds of happy kids at the playground and the plunk of bean bags on cornhole, the rounds of applause for candidates for local, state and national offices rose above it all.

Candidates included U.S. Congress candidate for District 8, Scott Huffman. First speaker among the candidates present, Huffman, a veteran, was most incensed that anyone in Congress, regardless of party, would actually vote against veterans. He assured voters that he will support veterans and continued with examples of other recent legislation, ending with his support for reproductive health for women and a woman’s right to not be  considered a second class citizen.
Tangela (Lucy Horne) Morgan, NC State Senate candidate for District 33, echoed Huffman’s comments with examples of how her experience, expertise, and outlook can bring fresh ideas to make a real difference in the NC General Assembly. Raised in Stanley County and living in Rowan for the past twenty years, Morgan spoke of her humble beginnings and how her family instilled faith, education, and service – values she lives in her work life as a classroom teacher and currently as a school counselor for RSSS and values she will bring to the NC General Assembly.
Geoffrey Hoy, Democratic Party Chair, introduced three school board candidates as “equally impressive.”
Sabrina Harris, entrepreneur and long-time business owner in Salisbury, will vie for Seat 6, Special. Harris assured the crowd that listening is as important as talking over one another during board meetings and that she can make a difference in how the school board pays concerted attention to each other, staff, parents, and children.
Ruth Marohn, a Spanish teacher at Carson and retiring in December from RSS and candidate for Seat 3, emphasized that she wants to see students have the brightest future possible. She has new ideas to bring to the board as a teacher that are more in touch with the realities educators face daily.
Ebony Rivers Boyd, Seat 4 – West,  attended Knox Middle and graduated from Salisbury High School. After moving back to Rowan County to care for family, she first worked as a social worker before moving to the classroom with RSS. Now at Forsyth Tech, Boyd feels the current board lacks some key elements of experience in the schools and believes she is ready and capable to help broaden those horizons.
Hoy encouraged all present to donate to the campaigns and to sign up to volunteer as local Democrats organize to get out the vote for the 2022 midterms.