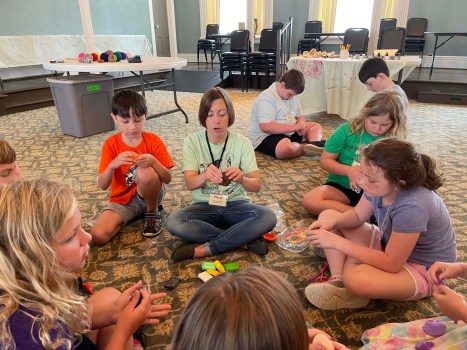 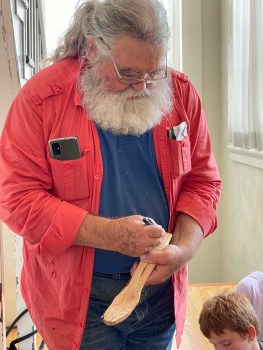 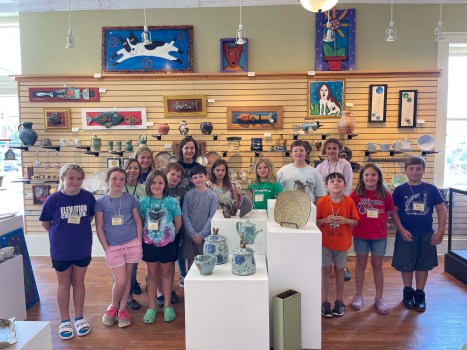 SALISBURY — Students recently got a chance to see what it was like to work historically significant jobs.

Students gathered for Rowan Museum’s Apprentice Camp on Aug. 3 and learned everything from caning wood into baskets to carving spoons.

It was nice to have the museum’s retired director, Kaye Hirst, and museum Vice President Terry Holt on hand to help the students make a basket of their very own. Holt had precut basket bottoms in the shape of North Carolina. The museum provided strips of wood to weave called caning. The students adapted the skills they had just learned weaving bookmarks on looms and applied their new knowledge.

“What did they use baskets for?” Hirst asked.

Responses included food, apples and everything. They caught on to the reason for hosting Apprentice Camp. If you needed it, you made it. If you made it, you traded it.

When the students entered the beautiful Messinger room of the 19th century courthouse, they were drawn to the toys placed for exploratory play. Each toy taught a lesson. Dominoes taught math and game skills. The ball and cup improved hand-eye coordination, as did the ring toss. Play was preparation for adulthood.

Museum educator Tricia Denton Creel introduced hand weaving with looms, yarn choices and important tools such as shuttles and threaders. There were frustrating moments but by the end of the day, students called weaving relaxing.

Weaving was a necessary skill for cloth production, one of many skills that young apprentices learned throughout the camp. Retired educator Theresa Pierce introduced marble painting. Old books have marbled inserts. Marbled wallpaper was a sign of distinction. The young apprentices proceeded to create their own version of marble painting with marbles and washable paint. The campers rolled the marbles dipped in paint around in trays on paper. Their marbled paper later became the cover for their journals bound in 18 th century style hand-bound by Holt and Pruitt.

Next on the agenda was a much-anticipated trip to Pottery 101, downtown Salisbury. The short walk from the museum did not disappoint.

Kelsey Sorenson, a potter, demonstrated how to make a bowl on a spinning wheel. She made it look easy but students quickly recognized experience counts just like it did for an apprentice worker. Sorenson pointed out, “Pottery is about 20,000 years old. North Carolina is called the pottery capital of the United States because of geography. Rocks decompose and rivers carry sediment by way of streams. That sediment settled here gave us accessible red clay.”

She also taught the students about hand-built pottery, which was made before wheels.

The tour of the store was a highlight where lessons included glazing, multiple firings and crystalizing. Students were curious about the art of John Morehead. “He makes the art that looks like fish,” Sorenson said. The students liked it all, the art, the jewelry and the wide variety of pottery. Cheers broke out when Denton Creel announced the campers would be making their very own pinch pots.

He surprised the group by teaching them that mostly girls made spoons to cook with because the boys were helping with the farming.

Michael Braun studied seven years as an apprentice before he became a master wheelwright. Elijah said, “I am going to keep smoothing and make the best spoon in town.”

The spoons became a treasure to take care of. Steve suggested if you carved your potential mother-in-law a spoon, she might tell her daughter to marry you. That led to plenty of giggles.

Next up was sewing where the students learned a good length of string goes from your nose to your fingertips.

Southeast living historians Nancy Gaines and Carol Salloum taught the students to use beeswax to coat the thread so the string will be easier to thread and slide through the fabric.

Gaines and Salloum taught about pinning fabric in place, how to make two different stitches and how foot-powered treadle machines worked.

Campers laughed, “I get it. Sew and sew, dad joke.”

Clyde came in ringing a bell announcing it was time for school. Dressed in school period attire, he started by teaching the students to practice looping in the air.

This was followed by practicing o’s and s’s. The final step with pen and ink got messy. The students learned how important penmanship was in the 18th century. A good apprentice kept good records.

The feather pen was also good for waking up sleepy students. John Hancock had excellent penmanship and wrote his name in large letters on the Declaration of Independence because he wanted it to be recognized by the king.

Clyde calligraphied a name card for each student’s desk at home.

The students wrapped up the day discussing professions of the 18th century, some they did not learn to do at camp like wig making, shoe cobbler or blacksmith.

The campers checked off their day’s to do list and got paid with a farthing coin worth one fourth of a penny. The students groaned at the worth followed by laughter.