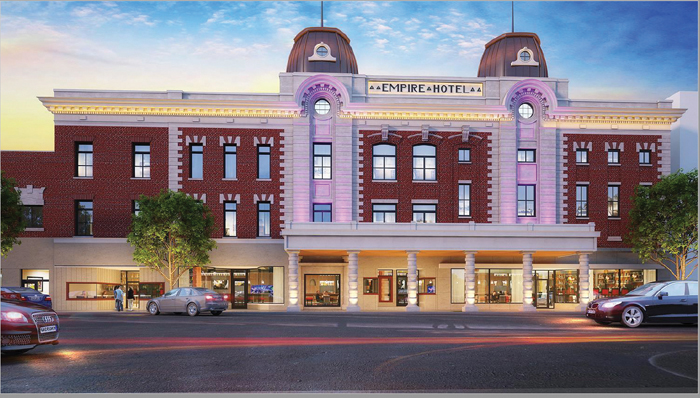 A rendering from architect Eddie Belk and developer Brett Kreuger of what the old Empire Hotel will look like following reconstruction a renovation, complete with the original domes on top. Submitted rendering

SALISBURY — The Empire Hotel, which continues to occupy about half of the 200 block of South Main Street, has patiently waited for the right developer, with the right vision, to come along and bring it back to its former prominence and glory.

The Empire began life in 1859 as the Boyden House. It underwent extensive renovations after the turn of the century, and in 1907 was renamed The Central Hotel, then eventually The Empire Hotel. The roaring ’20s saw the hotel in the center of high society, its ballroom filled with life and dancing, followed by the financial strife of the ’30s, when many of the rooms were converted into small apartments and the once-glamorous ballroom converted in part into temporary housing. The hotel closed for good in 1963, but remained in the hands of the Ragsdale family until it was sold in 2007.

When Downtown Salisbury, Inc. (DSI) purchased the property that year, it was with the goal of finding just the right developer. But through the ensuing years, twice a plan was on the horizon, and twice it did not come to fruition. In September of 2020, DSI released a new Request for Proposals, or RFP, in the firm belief that there was still a developer out there who would be the right fit.

Several applications were received, and after careful, thoughtful, painstaking consideration, BSI chose Brett Krueger, a Charlotte-based developer of boutique hotels and condos across North Carolina. The contract with Krueger was signed this past January, and immediately Krueger began to think of the team he wanted to put together to bring his vision for the Empire to life.

Wednesday afternoon, Krueger and that team met with a select audience made up of members of BSI, the Empire Hotel Task Force, representatives from the local government and a few special guests to provide an update on the process. Krueger pointed out to those in attendance that he believes some of the past failures were because the concept was not the right one for the Empire.

“I always want to be sure we have the right concept,” he said. Current plans include 25 boutique hotel rooms, 38 apartments, a high-end restaurant, a bar and spa, with retail spaces on the ground floor. But to bring it all together, and to add some local historic knowledge, the first person Krueger contacted was local developer Josh Barnhardt, who is no stranger to restoring historic buildings. Barnhardt renovated the Innes Street building that houses Barnhardt Jewelers, turning a second floor into two apartments, and he is currently in the middle of work on renovations to “The Salisbury” building on Council Street, which is becoming luxury apartments.

“The way we found out we had not been chosen as the developer was when Brett called me that night,” laughed Josh. “But the more I got to know Brett, and his ideas, and his dreams for the property, the more I began to see he was right, that his vision is right for the property. And this is really personal. It’s a labor of love, not just for me but for the whole team. We’re all in on this one.”

“It’s an entire concept,” he said. “It’s great food, it’s wonderful, top-of-the-line accommodations, it’s luxury extras, it’s over-the-top customer service, it’s the whole picture.” He is inclined to combine boutique with antique as well, creating a historic, elegant feel in a space. “And we want the facility to be a testament to what Salisbury is.”

He said the ballroom, which will be restored, will have, on one end, a design that captures what the exterior of a historic Victorian house in the historic district looks like, and will be “likely the highest-tech ballroom you have ever seen.”

Once Barnhardt was on the team, he and Krueger invited the team at the Sherbert Group to join the crew. The Sherbert Group bills itself as “An Integrated Tax Credit Solutions” business and is made up of several businesses.

Principal Tara Sherbert said the Empire “came past our plate numerous times,” but the concepts proposed never seemed quite right. The Sherbert Group was the driving force behind Drayton Mills in Spartanburg, South Carolina, the largest industrial historic rehabilitation project in the state, and a tremendous success, so the organization is more than familiar with undertaking the often challenging renovations of historic sites. But the idea had to be right.

“This was the first plan we had seen giving the Empire the chance to be what it wanted to be,” said Sherbert.

It was time to add an architect, and Krueger said, “nobody knows more in North Carolina about historic renovations than Eddie Belk.” He was invited.

Belk said he’s been around for 74 years, and his wife has wanted him to slow down since he hit 70, so he went to her with some trepidation. She, however, was beyond supportive.

“When I told her I’d been offered a chance to work on the Empire, she said ‘well of course you have to do that.'”

All the members are bringing the best of their experience and knowledge together to create what they hope will be an anchor and a destination point for the city. The artistic rendering of what the ‘new’ hotel will look like is incredibly similar to what it once was, including two domes on top of the building that were likely destroyed some time in the 1970s.

Krueger also anticipates it will be patronized not just by visiting guests, but by residents who shop, eat in the restaurant, and who use the ballroom for numerous events. He noted he hopes “a lot of charities will hold events there,” noting that in another facility he worked on, even an animal adoption event was held for a local shelter.

As part of the promotion or marketing of the venue, come October, Barnhardt said a full film and production crew will be on hand to capture the existing building. He and Krueger said the whole idea of the paranormal has grown in recent years, and perhaps the Empire has a few ghosts of its own.

“I hope so,” said Belk. “It would be our fourth project with an ethereal resident, so I hope there is.”

Whitney Williams, who is a former president of DSI and chair of the Empire Redevelopment Task Force, said the group working on the project has had many questions already, and it is not because they are unhappy with the work Krueger and his team are doing.

“We are incredibly specific, difficult,” she said, “but not unhappy. We have been so pleased with all we have seen presented so far. We just want to be sure we completely understand the plans and the steps as we go along. But what we have seen to date is fantastic.”

Though the timeline is never set in stone, Barnhardt said if everything stays on track, the goal is to begin demolition at the end of 2022, and then finalize plans, get permits in place, and begin construction in early to mid-spring 2023.