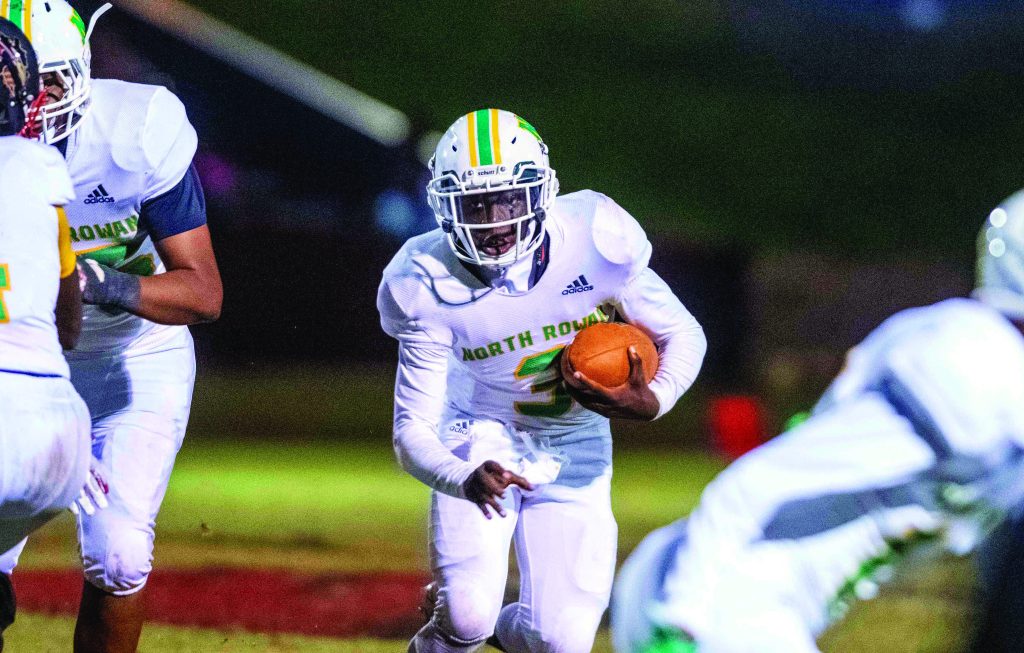 GRANITE QUARRY — Whether they see the glass as half-empty or half-full, Nygel Pearson and the North Rowan football team are thirsty for more.

The third-year coach was both critical and complimentary Thursday night after the Cavs opened the 2022 season with a ragged 34-14 non-league victory at East Rowan.

“First of all, we’ve got to take better care of the football,” Pearson said, just moments after North yielded 18 first downs, 318 total yards and had three passes intercepted. “That’s not our M-O. That’s not what we do. But this is just a start. We’re all going to get better together.”

“This was his first varsity football game,” said East coach John Fitz. “And he was a confused quarterback. I coach him, so that’s completely on me.”

Walker, a mobile left-hander, completed 20 of 44 passes for 247 yards and gave the Mustangs a puncher’s chance. East took 14 snaps in North territory in the second quarter alone but was undone by three interceptions — each by Cavs defensive back Tsion Kelly.

In the second half, Walker showed enough poise to engineer a pair of impressive, up-tempo scoring drives. First came a 7-play, 72-yard march that led to TiJon Everheart’s first touchdown and drew the Mustangs within 13-7 just two minutes into the third quarter. Then with time expiring in the fourth, he directed a too-late-to-matter 11-play drive TD drive, handing off to Everheart on a 3-yard smash into the end zone.

“What we do is very simple,” Fitz said. “We literally ran the same two plays — it’s actually the same play in different directions — probably 80 percent of the time. We’re reading the hole player. If he comes in because he thinks we’re gonna run, we throw the ball. If he doesn’t, we hit the hole hard. It’s really that simple.  (Walker) will get better. He’s got to learn to trust what he sees, not what he thinks he needs to do before the play starts.”

Credit North’s havoc-raising 3-4 defense with persevering, even when it was clearly gassed. More than half of East’s 15 possessions ended with turnovers. Besides Kelly, teammates Amari McArthur, Nazerion Stinson and Khor’on Miller had picks, with Miller’s resulting in a 52-yard pick-six that closed the scoring. Defensive linemen Alex Colon and Robert Caldwell recovered fumbles for the Cavs.

“I think we came out really ready to play,” said Kelly. “They forced us to keep our composure and keep fighting. Yeah, we’ve still got stuff to work on. But we’ll come back to practice with our heads up.”

North’s offense was paced by the usual suspects. And while McArthur — the all-county wide receiver — was held in check (3 receptions, 38 yards), quarterback Jeremiah Alford led four touchdown drives and running back Jaemais Morrow carried 13 times for 169 yards and three touchdowns. His 80-yard sprint for a score gave North a 20-7 third-quarter lead and came just 14 seconds after East had pulled within six points.

“I just remember hitting the hole and making a good play,” said Morrow, who also forced two second-half fumbles as a dirt-eating linebacker. “I gotta thank my offensive line for that one. The tough part was how we had to keep playing hard, to keep pushing ourselves, even though we were tired. We had to figure out a way to play through fatigue.”

Kelly and the defense eased some of that burden, forcing three turnovers in the final stanza.

“That was a little bit of us being in the right place at the right time,” Pearson offered. “And a bit of their guy making some mistakes. And we got some lucky tips, but we’ll take it.”

East, meanwhile, will take its lumps while it endures some growing pains. “Between the 20’s, we moved the ball up and down the field on them,” Fitz said. “We hurt ourselves, but we’re gonna work all that out. Most football teams have their most improvement between game one and game two. We’re hoping that’ll happen.”

NOTES: North rushed for 267 yards but did not record a first down in the second and fourth quarters, finishing with 11. … Everheart had 20 carries for 97 yards and scored his second touchdown in the waning moments. Teammate AJ Goodman had five receptions for 85 yards. Cole Eagle made seven catches for 40. Senior cornerback Evan Porter sparked East’s defense with a pair of interceptions … The game was originally scheduled to be played at North but was moved due to a water issue at James Carr Eagle Stadium. … The Cavs visit South Rowan next Friday while the Mustangs play North Stanly.